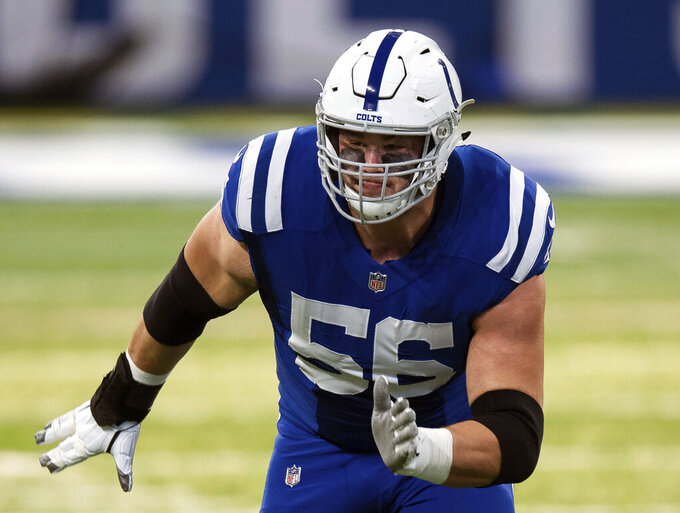 General manager Chris Ballard's next move to keep one of the league's top offensive lines is anybody's guess.

Nelson, the No. 6 overall pick in the 2018 draft, has started all 48 games at left guard for the Colts and is the first offensive lineman since the 1970 merger to earn All-Pro honors each of his first three seasons. Nelson joined Barry Sanders, Keith Jackson, Lawrence Taylor and Earl Campbell as the only players to achieve the feat.

There's no doubting the impact Nelson has made.

Before the Notre Dame star arrived in Indianapolis, the Colts had one of the leakiest lines in the NFL. After Nelson was plugged immediately into the starting lineup, Indy became one of the league's stingiest. The Colts have allowed the second-fewest sacks (71) in the NFL over the past three seasons and also opened holes for two straight 1,000-yard rushers.

So paying Nelson roughly $13.8 million to keep him through 2022 was a no-brainer even after they re-signed center Ryan Kelly to a four-year, $50 million contract extension in September.

Ballard still has plenty of work to do.

He's expected to use one of this week's six draft picks, perhaps Indy's first-rounder (No. 21) , to replace longtime left tackle Anthony Castonzo, who retired in January. Right guard Mark Glowinski and right tackle Braden Smith, a second-round pick in 2018, are both entering the final year of their deals, and, of course, Nelson should be in line for one of the biggest paydays for an interior lineman before potentially hitting free agency in 2022.

“I think one thing we’re really up against is realizing we want to get some extensions done,” team owner Jim Irsay said recently. “With the cap restriction that it’s been at, we have to be very careful to watch the cap to make sure we manage it so we don’t get into a bad situation a couple years from now.”

And while Ballard has repeatedly expressed his preference to build around the offensive and defensive lines first, two-time All-Pro linebacker Darius Leonard and defensive linemen Kemoko Turay and Tyquan Lewis are all entering the final year of their deals.

Leonard, Smith, Turay and Lewis were all second-round picks in 2018.

But keeping Nelson around for two more seasons was the first of what will likely be many moves over the next 11 months.