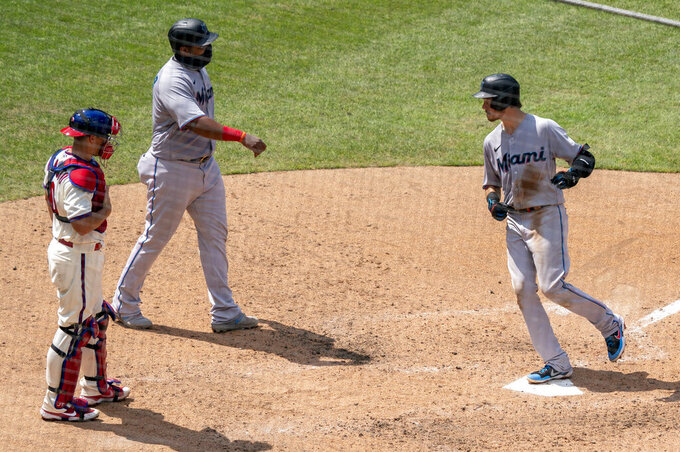 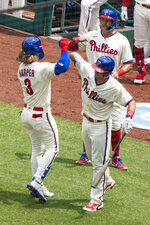 For a day or two, it seemed like it might actually work. Baseball was back and, even if some of the familiar sights of summer were missing, there were actual players with bats and balls along with the cute cardboard cutouts of babies and dogs in the stands.

But there’s nothing cute about the coronavirus. And nothing good about baseball’s botched response to the first crisis of its strangest season ever.

The Marlins are done, or at least they should be. There’s no way a team ravaged by the virus can even try to carry on, even if you accept the idea that 29 other teams should continue to chase a World Series title that means less with every positive test.

Baseball should be done, too. If there’s anything the outbreak showed, it's that MLB’s plan to play during the COVID-19 pandemic was not only seriously flawed but lacking in execution. The fact the Marlins still played in Philadelphia on Sunday with positive tests already coming back is an indictment of both the system baseball put in place and the way it has been executed.

Yes, the league was able to begin play with the pandemic raging and no bubble in place. That was probably the easy part because there was never any way it was going to finish.

But baseball is in too deep now to quit. Giving up on the season is apparently not an option for Commissioner Rob Manfred and owners, at least until the optics of a coach or player on a ventilator make it impossible to continue to plow blindly forward.

A third of the Marlins testing positive for the virus isn’t just concerning. It’s absolutely frightening.

“I’m going to be honest with you, I’m scared,” said Nationals manager Dave Martinez, who has a heart condition and whose team is scheduled to travel to Miami and play the Marlins on Friday.

A lot of other people in baseball are scared, too. With good reason, because it looks like even a 113-page manual on containing the virus isn’t worth the paper it’s printed on.

“Part of the reason I’m at home right now is because players health wasn’t being put first,” tweeted Dodgers pitcher David Price, who opted out of the season. “I can see that hasn’t changed.”

It’s not just baseball, though the sport is an easy one to criticize. The sample is limited so far, but you have to wonder whether any team sport can be played in the middle of a raging pandemic.

There are a lot of nervous people in Florida, where the NBA bubble could pop at any moment. The NHL is a little more confident about opening play after a week of negative tests, but it’s worth noting the league is playing in Canada, not the U.S.

And then there’s the NFL, where the executive in charge of controlling infections for the Minnesota Vikings tested positive just as players were arriving to camp.

Bringing back team sports in the middle of a pandemic was always going to be problematic. Increasingly, though, it’s looking like it will be impossible.

Baseball players, at least those with guaranteed roster spots, must be wondering if playing is worth the risk to their health. Those risks are very real, as anyone knows who listened to Atlanta star Freddie Freeman talk about praying that he wouldn’t be taken when his fever spiked to 104.5 degrees with the virus earlier this month.

Or when Red Sox pitcher Eduardo Rodríguez returned to play after a bout with the virus only to be sidelined with lingering heart issues stemming from it.

Or when they hear the experts who saw this coming all along.

“Baseball is in huge trouble, huge trouble,” said Dr. Andrew Morris, a professor of infectious diseases at the University of Toronto. “It makes me wonder if they are listening to the advice of experts or whether their experts are giving them good advice. This was not a plan anyone who knows what they are talking about would have conceived. It’s playing out like it was supposed to play out.”

It’s not just baseball. The virus doesn’t play favorites, and even the bubbles in the NBA and NHL may not be enough to keep it out.

With no bubble, though, baseball is exposed. The NFL is, too, just as the league is opening its camps this week at just the wrong time.

The coronavirus has so far sickened everyone from kitchen workers to heads of state. There’s little chance a football team in close quarters can escape an outbreak, much less contain it.

Still, the NFL will move ahead, just like baseball. They’ll try to hold a season until there comes a point where holding a season proves impossible, whether that happens because of positive tests or player revolts.

We all want to see sports back but this was always going to be too soon, at least for team sports. What ended up happening was predictable enough, with the rush to return running headlong into a virus that refuses to retreat.

As long as the virus continues to spread unchecked, even the most meticulous plans seem doomed to failure.