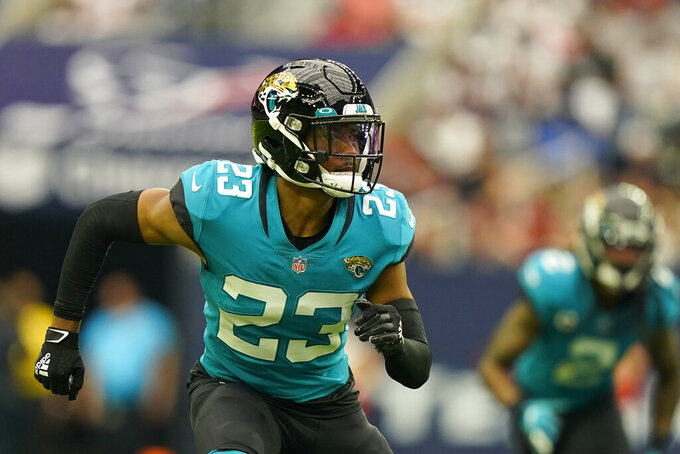 FILE - Jacksonville Jaguars cornerback CJ Henderson (23) lines up against the Houston Texans during the second half of an NFL football game in Houston, in this Sunday, Sept. 12, 2021, file photo. C.J. Henderson is eager for a new beginning and the Carolina Panthers are more than happy to give it to him. The No. 9 overall pick in the 2020 NFL draft washed out after a little more than a year in Jacksonville, and is hoping to jumpstart his career after being acquired by Carolina in a trade earlier this week.(AP Photo/Eric Christian Smith, File)

CHARLOTTE, N.C. (AP) — C.J. Henderson was eager for a new beginning and the Carolina Panthers were more than happy to provide it for him.

The No. 9 pick in the 2020 draft washed out after a little more than a year in Jacksonville, and is hoping to jumpstart his career in Carolina after being traded earlier this week. He goes from a Jaguars team that was 1-18 during his tenure to an unbeaten Panthers team ranked No. 1 in defense.

“I feel like it’s a fresh new start for me,” Henderson said. “Just to start over and get things back on track. Just to get things rolling again.”

The Panthers (3-0) made the bold move to acquire Henderson after losing cornerback Jaycee Horn, this year's first-round draft pick, to a broken foot in a Week 3 win over the Houston Texans.

But Panthers coach Matt Rhule said the decision to trade tight end Dan Arnold and a 2022 third-round pick to the Jaguars for Henderson and a fifth-round pick “isn't about a Band-Aid.”

They view Henderson, who is under contract through the 2023 season, as an important piece of the secondary for a long time.

“This is not a right-now, this-week conversation,’’ Rhule said. “This is about the next two years, three years.”

It's unclear if Henderson will play on Sunday against the Dallas Cowboys (2-1).

Henderson, who'll wear No. 15 in Carolina, joined the Panthers at practice on Wednesday and the team wants to make sure he's up to speed with the defensive playbook before throwing him into the starting lineup.

Rhule wouldn't rule out Henderson having a limited role vs. Dak Prescott and the Cowboys.

“I’m not sure if that’s this week or not, to be honest with you,” Rhule said. “We’ll watch the tape and see what he’s ready for. The guys that have been practicing and preparing with us for a while, those are the guys we trust to go win the game. And we’ll bring C.J. along, and whenever he’s ready to help us, he’ll help us.”

Panthers general manager Scott Fitterer felt he couldn't pass up on Henderson, who brings size, speed and length to the cornerback position.

The Panthers considered taking Henderson with the No. 7 pick in last year's draft before settling on Auburn defensive tackle Derrick Brown.

“C.J. Henderson is somebody we liked a long time,’’ Rhule said. “Any chance you have to get a top-15 draft pick from the year before, it’s very unique.’’

Henderson said his time in Jacksonville “had its ups and downs.”

“I learned a lot, as a player and a person," Henderson said. “There’s nothing I regret. I feel like everything in life happens for a reason.”

Cornerback Donte Jackson, considered one of the elder statesman in a young Panthers secondary, said he likes the energy he's seen from Henderson.

“He was asking a lot of questions early on," Jackson said. "He wants to compete; he’s a defensive back, and we like to compete. That’s definitely the early impression on C.J. He comes in ready to compete and make us better.”