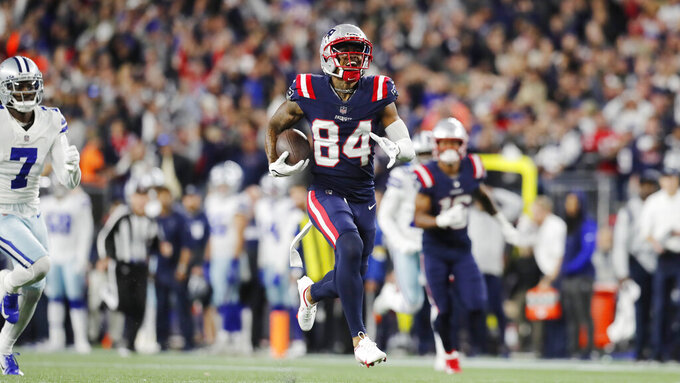 The breakout star of the Dallas Cowboys also did what came naturally, seeking encouragement in a phone call with older brother Stefon Diggs, Buffalo's 2020 All-Pro receiver who was in Minnesota at the time.

“In that moment, I kind of felt for him saying, ‘I understand,’” Stefon Diggs said. “You know, Alabama’s a powerhouse school. You don’t really get a lot of say-so. But knowing that he was going to be in good hands, you know this is the best, if not the best coach we’ve ever had in college football telling you that he wants you to play corner for good reason.”

There are seven reasons now — and counting.

Diggs and Pro Football Hall of Famer Rod Woodson are the only players since the 1970 merger with seven interceptions in the first six games. Diggs is the first player in the Super Bowl era (since 1966) to return at least two of those picks for touchdowns.

Going into Week 7, with the Cowboys (5-1) on their bye, the second-year pro has more interceptions than 27 teams. Diggs can be the first NFL player with an interception in each of the first seven games when Dallas returns at Minnesota on Halloween night.

From the second-quarter interception of seven-time Super Bowl champion Tom Brady in the opener through the pick-6 late in the fourth quarter against New England rookie and former Alabama teammate Mac Jones last week, Diggs just keeps on picking.

With 11 games remaining, he's only four interceptions from tying Everson Walls' club record of 11 in 1981. For anyone wondering, the NFL record is 14 by Night Train Lane for the Los Angeles Rams in 1952.

Diggs' background as a receiver is where the conversation always seems to start for what he's doing now. He played that position as a freshman with the Crimson Tide, catching 11 passes with one touchdown while getting most of his work in the return game.

Then came the conversation with Saban going into a season when Alabama had four future first-round picks at receiver.

“He had great ball skills, really good hands, long, very athletic,” Saban said. “I thought there would be more value for his future if he was a corner. I don't make guys move positions, so it was his final decision to do it. It's certainly worked out really well for him.”

The 6-foot-2 Diggs never really doubted that Saban knew best, and didn't need long to put aside the emotion with help from his brother.

The next disappointment for Diggs was waiting until the second round to get drafted in 2020. The Cowboys picked CeeDee Lamb at No. 17 in the first round when the receiver unexpectedly fell to them. Now Dallas might have future cornerstones at both positions.

Diggs flashed some of his ability as a rookie with his first two-interception game against Philadelphia while finishing with a team-high three.

The receiving skills have shown up on this year's touchdowns, particularly the 42-yarder against the Patriots when Diggs navigated some traffic and followed a nice block from rookie linebacker Micah Parsons.

In feedback to young players, Dallas defensive coordinator Dan Quinn has a tendency to move on quickly from the good plays — to a point.

“I just want him to stay in this pocket of where he’s at,” Quinn said. “He’s present, he stays focused and he doesn’t look past anything other than nailing that day and that week. Just keep pedaling hard downhill, man. More cowbell.”

Risk comes with production of this magnitude, and Diggs showed it right after his go-ahead TD late in the fourth quarter at New England when he was too aggressive on a double move by Kendrick Bourne. The 75-yard touchdown immediately put the Patriots back in front.

Diggs is tied for sixth in yards allowed when getting beat, according to Sportradar, and his five plays allowed of at least 20 yards are tied for 10th. On consecutive plays against Jones, Diggs showed quarterbacks should avoid him — and why they should challenge him.

Either way, Diggs is drawing attention that won't go away anytime soon.

Saban would be proud of that approach, too.