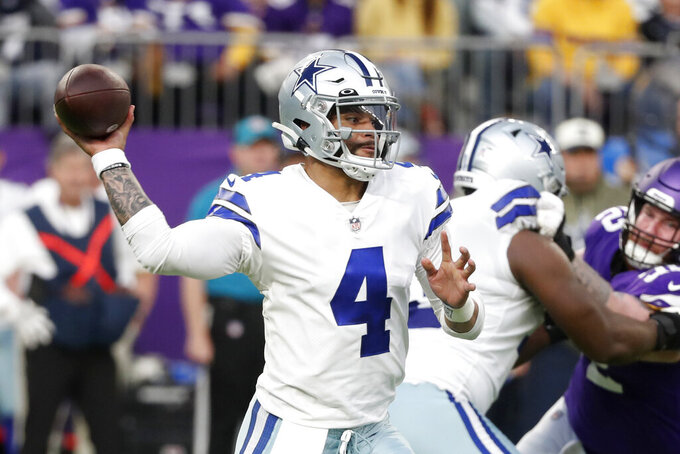 Dallas Cowboys quarterback Dak Prescott (4) throws a pass during the first half of an NFL football game against the Minnesota Vikings, Sunday, Nov. 20, 2022, in Minneapolis. (AP Photo/Bruce Kluckhohn)

TURNOVER DIFFERENTIAL: Giants plus-1; Cowboys plus-7

GIANTS PLAYER TO WATCH: RB Saquon Barkley was held to a season-low 22 yards against the NFL's second-worst run defense in the loss to the Lions. He had 81 yards and a touchdown in the first meeting with the Cowboys. Barkley's previous season low was 53 against Seattle on Oct. 30, and he bounced back two weeks ago with 152 yards.

COWBOYS PLAYER TO WATCH: QB Dak Prescott had the second-highest completion rate of his career at 88% (22 of 25) against the Vikings in the biggest road rout in club history. The Dallas offense has been much better in three games since his return from a fractured thumb on his throwing (right) hand. The Cowboys are the only team to score at least 40 points twice this season, both since Prescott returned from a five-game absence that included a victory over the Giants.

KEY MATCHUP: Dallas LB Micah Parsons vs. New York QB Daniel Jones. Parsons is the first Dallas player with double-digit sacks in each of his first two seasons since the stat became official in 1982. The reigning NFL Defensive Rookie of the Year has five two-sack games, accounting for all of his team-leading 10 sacks. But he will have to account for the running ability of Jones. The first meeting was one of Parsons’ five games without a sack. Jones has four rushing TDs, two more than in any of his first three seasons.

KEY INJURIES: The Giants will be without three starters in the offensive line in C Jon Feliciano (neck) and the rookie pair of RT Evan Neal and LG Josh Ezeudu. Nick Gates will replace Feliciano, Matt Peart is the likely choice to fill in for Ezeudu and Tyre Phillips, who has been dealing with a neck issue, will slide over from the left side to Neal’s spot. ... CB Adoree Jackson also is out with a knee injury. ... Parsons is nursing a lower leg injury after getting rolled up on against the Vikings, but is expected to play. ... Cowboys LB Anthony Barr had a setback with a hamstring injury in practice last week and is unlikely to play. It would be his third consecutive missed game. ... Four Dallas defensive linemen were on the injury report because of illness.

SERIES NOTES: The 122nd meeting is just the second on Thanksgiving. Dallas won the other 30-3 in 1992. The Cowboys have won 10 of the past 11 meetings since the end of the Giants' three-game winning streak. The last two of those New York victories were in Prescott's rookie year in 2016. He has won all nine of his starts against the Giants since then.

STATS AND STUFF: The Cowboys and Giants share second place in the NFC East, two games behind Philadelphia. ... The Giants have lost two of their past three games, giving up a season-high 31 points and committing a season-high three turnovers against the Lions. ... Jones completed 27 of 44 passes for 341 yards against Detroit, all season highs. But the first of his two interceptions ended a streak of 153 passes completed without a pick. ... WR Kenny Golladay had two catches against Detroit, his first since the opener. ... New York didn’t have a sack or a takeaway against the Lions. It also happened in the loss to the Cowboys. ... DL Leonard Williams has 3 1/2 sacks and a forced fumble in his past three against Dallas. ... S Julian Love had 14 tackles against Dallas earlier this season. ... PK Graham Gano missed both of his extra points attempts against the Lions, including one that was blocked. It was the first time in his 184-game career (including postseason) that he missed more than one. ... Dallas' three-game losing streak on Thanksgiving is one shy of its worst (1986-89). ... Prescott needs two TD passes to tie Roger Staubach for fourth on the club's career list at 153. ... RB Ezekiel Elliott passed TE Jason Witten on the Cowboys' career touchdown list with his two scores against the Vikings. He needs one to tie Dez Bryant for fourth in club history with 75. ... Dallas has risen to No. 1 in scoring defense in the NFL and is the only team that hasn't allowed a first-quarter touchdown. ... CB Trevon Diggs has an interception in each of the past three meetings with the Giants. ... K Brett Maher's seven field goals of at least 50 yards are the most in a season in franchise history.

FANTASY TIP: The hot hand theory is in effect with Dallas RB Tony Pollard. The fourth-year back is on a career-best run of four consecutive games with at least 100 scrimmage yards. Pollard had a career-high 189 against Minnesota. It's worth noting that Elliott has averaged 98 scrimmage yards per game on Thanksgiving.