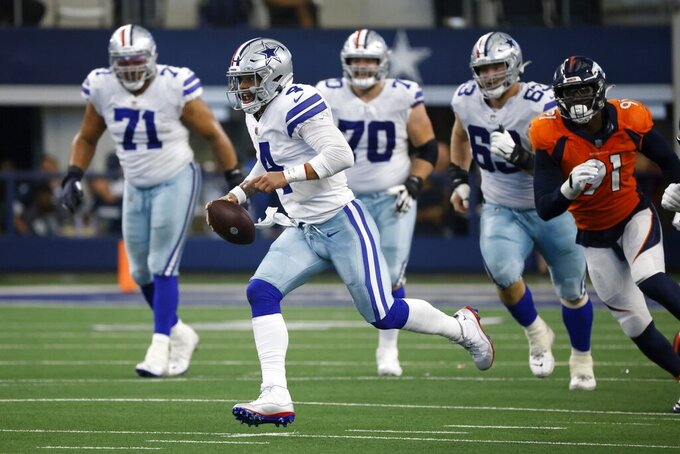 BETTING LINE: Cowboys by 9, according to FanDuel SportsBook.

TURNOVER DIFFERENTIAL: Falcons minus-3; Cowboys plus-3.

FALCONS PLAYER TO WATCH: Hybrid back Cordarrelle Patterson already has a career-high 737 yards from scrimmage after getting 126 yards receiving, second most of his career, against the Saints. Patterson has 459 yards receiving and five touchdowns to go with a team-high 278 yards rushing and two scores. He is the fourth Atlanta player with at least 700 scrimmage yards and seven touchdowns since 2000, joining Devonta Freeman (2015), Julio Jones (2015) and Michael Turner (2009, 2011).

COWBOYS PLAYER TO WATCH: QB Dak Prescott played poorly enough against Denver to raise questions whether he was bothered by the strained calf that kept him out of a game, or if the three-week layoff left him rusty. The first of three consecutive games of at least 450 yards passing last year came against the Falcons, three weeks before the gruesome compound fracture of his right ankle that ended his season.

KEY MATCHUP: Falcons TE Kyle Pitts vs. Cowboys LB Micah Parsons. The rookies were drafted eight spots apart in the first round (Pitts fourth, Parsons 12th) and have a little history. Parsons figures to draw the assignment of covering Pitts at times. They played each other in high school in Pennsylvania, with Pitts' Archbishop Wood team beating Parsons and Harrisburg High to win a state championship in 2016. Pitts is the first rookie tight end in NFL history with at least 35 catches and 500 yards in his first eight games. Parsons leads NFL rookies with 10 tackles for loss.

KEY INJURIES: Falcons OLB Dante Fowler Jr. could come off injured reserve and play for the first time since Oct. 10, a 27-20 win over the New York Jets. The surprising release this week of OLB Jacob Tuioti-Mariner might have been an indicator of Fowler's return. ... DL Jonathan Bullard was limited in practice to start the week after sustaining a concussion. ... Cowboys DE Randy Gregory injured a calf in practice this week and will miss multiple weeks. He’s the third Dallas player to miss time with a calf injury after Prescott and WR Michael Gallup. ... Gallup appears close to a return. He's been working in practice since last week. Gallup hasn't played since the opener. ... LT Tyron Smith seems likely to miss a second consecutive game with an ankle injury. ... WR CeeDee Lamb said his ankle injury affected him against the Broncos but that he feels better this week. ... K Greg Zuerlein is a long shot to play after going on the COVID-19 list, meaning 31-year-old former CFL kicker Lirim Hajrullahu could make his NFL debut after signing this week.

SERIES NOTES: The only one-point game in the 29 meetings came in Week 2 last year, when Dallas defensive coordinator Dan Quinn was Atlanta's coach and the Falcons lost the first of consecutive games when leading by at least 15 points in the fourth quarter. The Cowboys recovered an onside kick that Atlanta easily could have fallen on but let keep rolling past the 10-yard mark. Zuerlein kicked a 46-yard field goal on the final play as Dallas won 40-39. Quinn was fired after an 0-5 start.

STATS AND STUFF: Both teams are 3-1 when the game-deciding score comes in the final two minutes or overtime. All three of Atlanta's victories have come on field goals by Younghoe Koo on the final play. Dallas did that once with Zuerlein. ... Falcons QB Matt Ryan is tied with the retired Philip Rivers for fourth all-time with 73 games of at least 300 yards passing after throwing for 343 against New Orleans. Ryan had four TD passes and no interceptions in last year's loss to Dallas. ... LB Deion Jones is one of four NFL players with at least 10 tackles in six or more games. He's had at least 10 tackles in each of his past three road games. ... Prescott's club-record streak of four games with at least three touchdown passes ended last week, but he's had at least two in five consecutive games. ... Lamb had his first 100-yard outing in his second career game last year against the Falcons. With a TD against Atlanta, Lamb can join Dez Bryant, Terrance Williams and Pro Football Hall of Famer Bob Hayes as Dallas receivers with 10 scores in their first 25 games. ... Parsons is one of three rookies since 2000 with at least five sacks and 10 tackles for loss in his first eight games. The others are Kendrell Bell (Pittsburgh, 2001) and Nick Bosa (San Francisco, 2019). ... Free agent pickup S Jayron Kearse leads the team with 49 tackles, already just seven shy of his career high with Detroit last year. ... WRs Olamide Zaccheaus of Atlanta and Malik Turner of Dallas each had his first career multi-TD game last week with two.