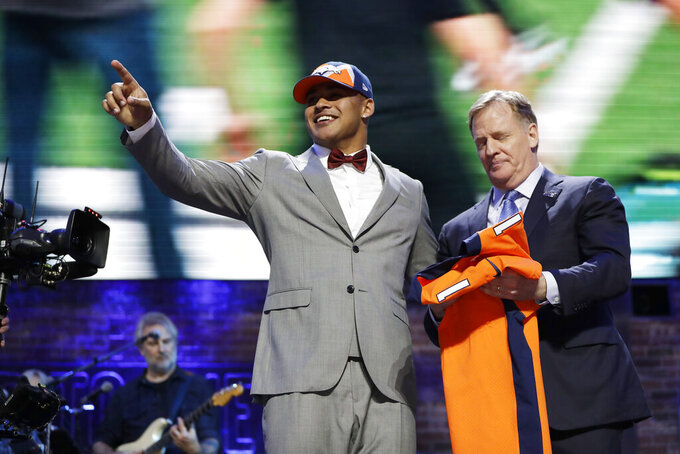 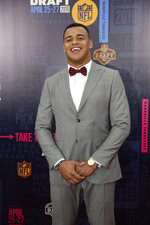 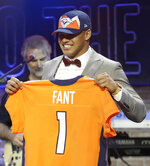 ENGLEWOOD, Colo. (AP) — John Elway gave Joe Flacco just what he wanted, a threat to stretch the field, not take his job.

The Denver Broncos general manager selected Iowa tight end Noah Fant with the 20th pick Thursday night, bypassing a quarterback in the first round of the NFL draft.

Elway, who gained an extra second-round pick by trading down 10 spots, said he didn't consider taking a QB at 10 or 20, much to the surprise of all those prognosticators whose mock drafts had him enamored with Michigan State's Drew Lock — who's still on the board heading into Round 2 Friday.

"No, no we didn't," Elway said. "It was not in the discussion when we got there."

Elway also said he didn't get any serious offers for star cornerback Chris Harris Jr ., who issued a pay-me-or-trade-me request this week after what he viewed as disrespectful comments by Elway.

"We talked to a couple of people, but there's been no traction," Elway said.

Although there are an abundance of highly touted cornerbacks available Friday, Elway said he wasn't going to necessarily target one because of Harris' situation.

Fant declared he was "super hyped" to play with Flacco, whom Elway acquired from Baltimore earlier this offseason and recently declared was still in his prime at age 34.

Last week, Flacco implored his boss to pick a non-QB in the first round, something Elway said he understood completely.

Elway was in a similar spot in 1992 when then-Denver coach Dan Reeves bypassed receiver Carl Pickens and drafted Tommy Maddux much to Elway's chagrin.

"Yeah, how'd that work out," Elway cracked this week.

With Michigan linebacker Devin Bush available, Elway surprisingly moved out of the "blue chip zone" when he traded the 10th overall pick to Pittsburgh for the 20th and 52nd overall selections and a 2020 third-rounder.

"We felt it was just too much value to not take," Elway said. "We had a couple of other options, too. So, we had a lot going on in that 10 minutes. So, we ended up taking the deal with Pittsburgh. .... and then being able to pick up Noah at 20, he can really run and stretch the field, very athletic and a very effective receiving tight end."

Fant and T.J. Hockenson, selected eighth by the Detroit Lions, became the first tight end teammates ever selected in the first round of the same draft.

"It's amazing to have those two great tight ends at the same school," Elway said.

Fant said at the NFL scouting combine, where he outperformed Hockenson in almost every measurement, that he wanted to be the first tight end taken in the draft. But he said he was OK going a dozen spots after Hockenson because he was "super excited, super stoked" to join the Broncos.

"And I would argue that I'm in the best situation for a tight end in this draft," he said.

"Obviously, we've had some health issues at that position," Elway said.

He insisted, however, that his pick was more about what Fant brings to an offense that has struggled for several seasons.

"It's another weapon. He can play three downs for us. He gets great matchups for us," Elway said. "And ultimately, you're looking to run and to have a guy that big and that size (that can) really stretch the field really helps us."

The overriding drama surrounding the Broncos during this draft weekend is Harris' sticky situation.

Elway, who once asked Peyton Manning to take a pay cut and famously played hardball with Champ Bailey and later Von Miller, reiterated Tuesday that he'll entertain Harris' request for a big raise after the draft, but pointedly added, "it doesn't mean we're going to do it ."

Harris, 30, who is due $7.8 million in 2019, wants about twice that annual salary, especially after taking a hometown discount in 2015. He's the only player in the NFL who has multiple interceptions in each of the last seven seasons and is the last remaining member of the team's famed "No Fly Zone" secondary.

Harris retweeted it, saying, "this is real cold."

Erich Schubert, the team's director of media relations, quickly sent a Twitter message to Harris, saying, "We have some really talented and hard-working people who create & distribute content, but this was an unintentional oversight not approved by the organization and we're sorry."

Schubert added the Broncos would immediately implement "stronger approval procedures" and "some replacement graphics." The team followed up with a quick edit to the post, inserting Harris and telling the ninth-year pro, "Hope this thaws things out. Our bad. We got you."

Harris responded to that update with the clapping hands emoji.