Denver's pricey secondary looks like a waste of money so far 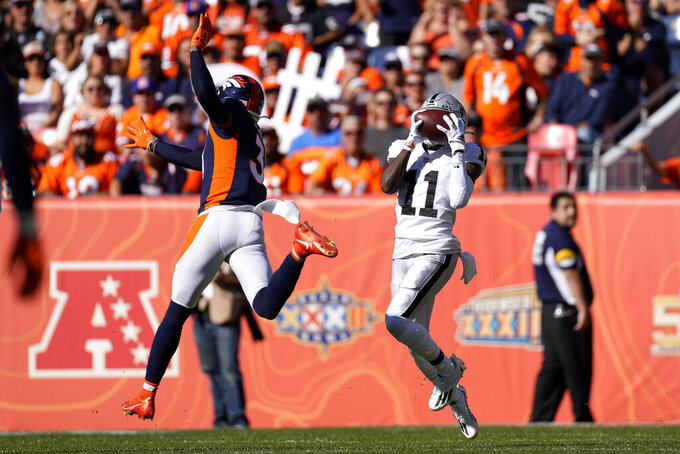 DENVER (AP) — Denver's offensive struggles are understandable given that their three fastest players are sidelined.

Jerry Jeudy (ankle) has an outside chance of playing this week, but KJ Hamler (knee) is done for the year and Albert Okwuegbunam's pulled hamstring is still on the mend.

The head-scratcher is how the league's most expensive secondary has turned out to be such fool's gold so far.

In their three-game skid, Denver has been beaten deep over and over, allowing 17 pass plays of 20 or more yards.

That's 589 yards and four TDs on 17 explosive plays in Denver's trio of October stumbles that has coach Vic Fangio and his staff feeling the heat.

“We got beat,” Fangio said. “It’s kind of been the tale here of late. We’ve given up way too many big plays — more than we’re definitely accustomed to doing. It wasn’t assignment problems. We just didn’t play them well enough.

Denver's defense was supposed to carry the franchise's hopes in 2021 and the secondary was going to be the keystone to the Broncos ending a five-year playoff drought.

All except Surtain have been burned deep this month.

Overall, the Broncos’ nearly $70 million allotment for their secondary represents more than 36% of their payroll and is about $20 million more than the next team on the list of D-back payrolls, the Giants, according to Spotrac.

“It’s a pressure-and-cover league,” Paton explained last month. “I don’t think you can have enough” corners and safeties. “And I like our group. It will help our front. When you can cover longer, it helps” the pass rush.

All this money concentrated in the secondary was designed to curtail Patrick Mahomes and Justin Herbert in the AFC West. But the Broncos couldn't even corral Carr, who threw for 341 yards and two scores and left Denver with such a stain-free jersey the Raiders should have just washed it in cold water.

“That type of stuff falls on me and I’m going to find a way to get this thing back on track,” Simmons said of this rash of big pass plays Denver keeps surrendering. “We’re too talented to be giving up those types of plays.”

The stumbling secondary. (see above).

TE Noah Fant pulled in nine passes out of 11 targets for 97 yards and a score.

Fangio, for his no-chance challenges that cost him two timeouts in the second half.

The first was on Fant’s catch that was ruled incomplete when he couldn’t get both feet down in the end zone. The second was on Henry Ruggs III’s clear 40-yard grab inside the Broncos 5.

Asked if he had somebody in his ear telling him to throw the red flag, Fangio said he didn't have a good view of Fant's catch and figured it was worth challenging just in case.

“I thought it was such a critical play at that point in the game that it was worth it, much like with the second one,” Fangio said.

A hope and a prayer isn't a good guide when challenging calls.

The big one is losing ILB Alexander Johnson for the year to a torn pectoral muscle, the same injury that sidelined fellow starting ILB Josey Jewell. Johnson was in the midst of his best season yet and entered the team tied with Jackson for most tackles. Rookie ILB Baron Browning went into concussion protocol and LT Garett Bolles (leg) is day to day.

5 — Turnovers by QB Teddy Bridgewater after his three-interception, one-fumble debacle against Las Vegas.

The Broncos travel to Cleveland (3-3) for a Thursday night game between two bruised and battered teams desperate for a victory.