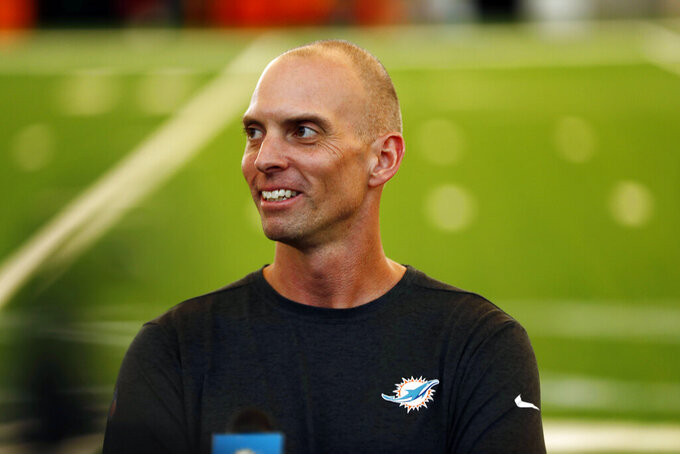 What the Dolphins are saying is that the 64-year-old Caldwell is the right coach for the job of developing newly acquired QB Josh Rosen, who is rebooting his career after a rocky rookie 2018 season with the Arizona Cardinals.

Caldwell is also starting fresh as Miami's assistant head coach and quarterbacks coach for new head coach Brian Flores. The transition will reach a new stage next week when the Dolphins take the practice field for organized team activities.

"We all have a long way to go," Caldwell said.

His primary job will be to maximize the potential of Rosen, the No. 10 overall pick in the 2018 draft, who will get a year to show the Dolphins he can be their franchise quarterback. If Rosen doesn't, they'll likely draft their QB of the future in the first round next spring.

"Josh has got a clean slate here," Caldwell said. "He's in a new system with a different group of guys, and we're looking forward."

Rosen will compete for the starting job with veteran newcomer Ryan Fitzpatrick.

"They'll get what they earn," new offensive coordinator Chad O'Shea said. "This is a very competitive situation. We have options at the position."

But to evaluate Rosen this year, the Dolphins need for him to play. And Caldwell's resume suggests he'll get the most out of Rosen, whatever that is.

Seventeen years in the NFL have taught Caldwell that one season is not enough time to pass judgment on a quarterback, Rosen included.

"In this league you find guys who have a great year one year, and they literally disappear the next," Caldwell said. "He's working at it, and obviously trying to put himself in position to have a little better year than last year."

Rosen ranked 33rd in the 32-team NFL in passing rating in 2018, throwing 11 touchdown passes and 14 interceptions as the Cardinals finished last in points and yards while going 3-13.

But Caldwell sees potential for a turnaround, and said the Dolphins' tutelage of Rosen is off to a good start.

"I don't think there's any secret he has talent," Caldwell said. "He has physical talent, and he's also very smart."

NOTES: The Dolphins begin a three-day rookie minicamp Friday. Three days of OTAs are scheduled next week beginning Monday. ... Dolphins vice chairman Matt Higgins will be honored Saturday as a recipient of the Ellis Island medal of honor. Higgins was chosen in part for his work after 9/11 to help rebuild New York City, and for his support of autism awareness and other causes. Higgins was born in poverty in Queens, dropped out of high school and started college at 16. "Any success I can achieve gives me credibility to speak to young people who might be struggling that this chapter is not going to define your life unless you let it," he said.