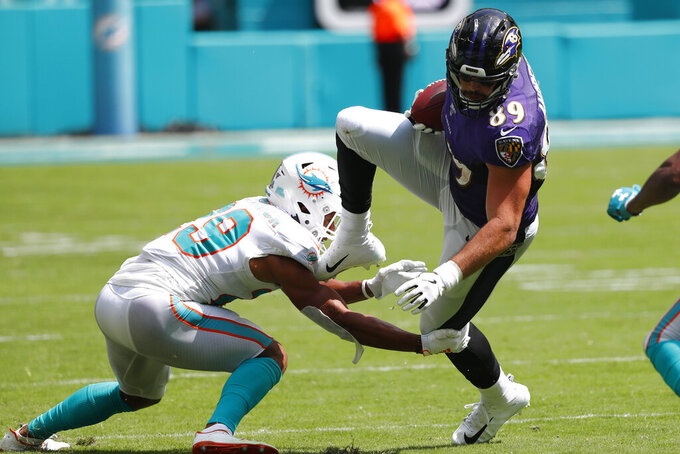 DAVIE, Fla. (AP) — One game into the season, the Miami Dolphins' situation is already so dire that their game plan to defend Tom Brady calls for significant help from a player who wants to be traded.

Disgruntled defensive back Minkah Fitzpatrick has requested and received permission to seek a deal to play elsewhere. Even so, the Dolphins are counting on him Sunday against the New England Patriots.

Fitzpatrick has been displeased with the way he's being used by Flores' staff. In the wake of last week's season-opening 59-10 loss to Baltimore, there have been rumblings other players are also unhappy with the coaches and the organization's emphasis on the 2020 draft over this year's roster.

Flores said he didn't consider the situation with Fitzpatrick unusual, but he declined to say whether he expects the 2018 first-round pick to be with the Dolphins the rest of the season.

Flores, a former Patriots assistant, recalled that veteran defensive back Patrick Chung was unhappy in New England four years into his career.

"I've gone through this a little before," Flores said. "Patrick Chung didn't like the way things were going in New England. He left and went to Philly, came back and that whole thing turned around. This is not my first go-around with a situation like this. That turned out well for Patrick.

"Things change quickly. We'll just see how this thing shakes out. ... I think we'll be able to move past it."

Fitzpatrick declined to discuss his trade request, or whether he expects to be with the Dolphins all season. But he pledged his best effort against New England.

"I'm going to go out there and give my all to this team," he said. "I can't focus on the trade and this and that. I just have to focus on being my best right now."

Fitzpatrick has apparently been unhappy for some time. When the Dolphins put him at strong safety during training camp, his mother, Melissa, complained on Twitter that he was being asked to play out of position. He said she wasn't wrong.

The situation came to a head following the loss to the Ravens, when the Dolphins tied a team record by allowing six touchdown passes in the most lopsided defeat in franchise history.

Flores' defensive play calling helped the Patriots to a 13-3 Super Bowl victory over the high-scoring Los Angeles Rams. He mixes 4-3 and 3-4 schemes that require players to play multiple positions.

"In a team sport, you do what's best for the team," he said.

But that scheme was shredded when Miami allowed a franchise record 643 yards against the Ravens. And shaky locker room morale won't be helped by talk of players looking for an exit.

"If you don't want to be here, I don't want you here," team captain Daniel Kilgore said Monday.

"If he feels that way, that's how he feels," McCain said. "Minkah loves football, so I know he is going to be all in Sunday. I would never question that."

Safety Reshad Jones was ruled out of the game because of an ankle injury, meaning Fitzpatrick's primary role will likely be to fill in for him. The Dolphins are the week's biggest underdogs.

"Going out and getting the job done and winning, that'll calm things down for sure," McCain said.

NOTES: RT Julién Davenport (leg), who started last week after being acquired from the Texans on Sept. 1, went on injured reserve. J'Marcus Webb, signed as a free agent last week, will replace him. ... WR Albert Wilson (hip) was also ruled out of the game.