Dolphins must wait to seal deal with Patriots' Flores 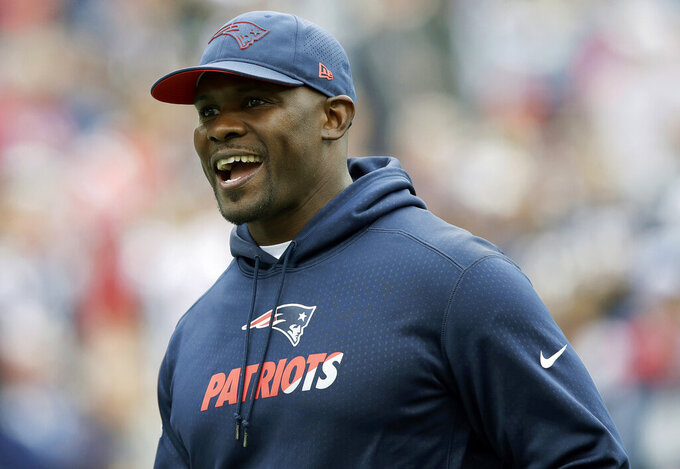 FILE - In this Sept. 9, 2018, file photo, New England Patriots linebackers coach Brian Flores watches his team warm up before an NFL football game against the Houston Texans in Foxborough, Mass. Flores’ team is headed for the Super Bowl, and the Miami Dolphins must wait another two weeks before they can seal a deal with the New England Patriots’ defensive play-caller to become their coach. The Dolphins decided nearly two weeks ago to offer the job to Flores, who has been a Patriots assistant for 11 seasons. (AP Photo/Charles Krupa, File)

MIAMI (AP) — While the 2018 NFL champion has yet to be crowned, much of the league is already looking ahead to the 2019 season, and so far the Miami Dolphins are in last place.

Las Vegas oddsmakers recently made the Dolphins a 300-1 choice to win the Super Bowl in Miami a year from now, by far the league's longest odds.

And because Brian Flores' team is headed for the Super Bowl, the Dolphins must wait another two weeks before they can seal a deal with the New England Patriots' defensive play-caller to become their coach.

The Patriots sent the Dolphins' wait on Flores into overtime by beating Kansas City in overtime Sunday in the AFC championship game.

The Dolphins interviewed Flores on Jan. 4, targeted him as their choice for the job on Jan. 11 and are expected to meet with him this week. But no agreement can become final until after the Patriots play the Los Angeles Rams in the Super Bowl on Feb. 3.

Also on hold are the Cincinnati Bengals, the only other team still with a vacancy among the eight NFL teams making coaching changes.

The Bengals are interested in Zac Taylor, the Rams' quarterbacks coach. It has been three weeks since Cincinnati fired Marvin Lewis after his 16th season and third consecutive losing record.

Flores has begun work to assemble a staff, and front-runners include former Colts and Lions head coach Jim Caldwell as assistant head coach and Packers assistant Patrick Graham as defensive coordinator. Some Dolphins assistants are expected to be retained.

But Miami will be without a head coach to help assess prospects this week at the Senior Bowl in Mobile, Alabama, and his evaluation of the roster in preparation for free agency and the draft will be delayed.

Senior Bowl executive director Jim Nagy, a former Patriots scout, said the Dolphins' wait for Flores will be worth it.

"He's one of my favorite people I've ever worked with or ever been around in my life," Nagy said Monday. "I could go on and on. I love Brian Flores. He's going to be a great coach. He's got a great way about him. He connects with all different kinds of people. It's a slam dunk hire for Miami."

The Dolphins went 7-9 last year under Adam Gase, who was fired after three seasons and then hired as coach of the New York Jets .

Flores and Miami general manager Chris Grier both started their NFL careers as Patriots scouts. Flores has spent his entire 11-year coaching career with New England, and he took over defensive play-calling a year ago after the departure of defensive coordinator Matt Patricia.

"Obviously he has done a great job," safety Patrick Chung said last week. "He's definitely a good coach and he likes to mix things up. It keeps guys off-balance."

The Patriots allowed 5,746 yards during the regular season to rank 21st, but ranked seventh in points allowed. The Dolphins ranked 29th by allowing 6,257 yards, the most in franchise history.

Expectations for Miami in 2019 are low partly because owner Stephen Ross has said the franchise will abandon its win-now approach to build with the long term in mind and end a cycle of mediocrity. The Dolphins have finished with six to eight wins nine times in the past decade.