Eagles look to improve to 8-0 Thursday against lowly Texans 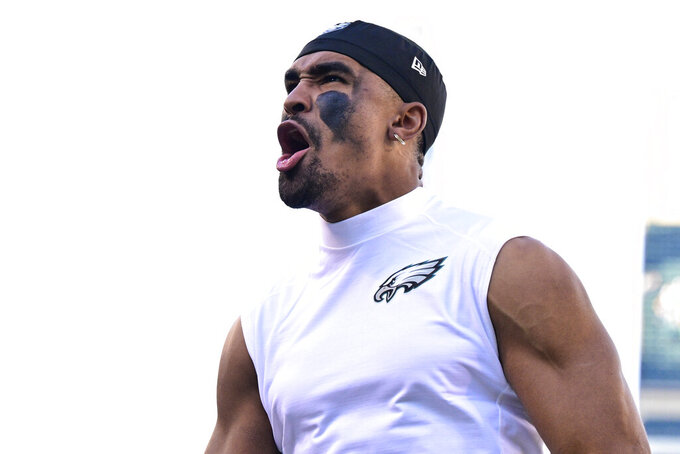 BETTING LINE: Eagles by 13½, according to FanDuel Sportsbook.

TURNOVER DIFFERENTIAL: Eagles plus-14; Texans plus-3.

EAGLES PLAYER TO WATCH: QB Jalen Hurts has won 10 consecutive regular-season games, the longest active streak in the NFL. This season, Hurts has been giving defenses fits with his arm and his legs. Hurts has passed for 1,799 yards and 10 TDs and has run for 303 yards and six TDs while accumulating a 105.1 QB rating. Hurts dominated the Steelers and became the first Eagles QB to throw four 25-plus yard TD passes in a game since Norm Snead on Sept. 28, 1969, vs. Pittsburgh. Overall, he became the first NFL QB to accomplish the feat since Patrick Mahomes on Nov. 1, 2020, vs. the Jets.

TEXANS PLAYER TO WATCH: RB Dameon Pierce will look to bounce back after a tough game last week. The rookie fourth-round pick had a touchdown catch, but managed just 35 yards on 15 carries against the Titans after averaging more than 107 yards over the past three games. He ranks 12th in the NFL with 539 yards rushing and has a TD in four of his past five games.

KEY MATCHUP: Eagles RB Miles Sanders vs. Houston’s run defense. Sanders is tied for seventh in the NFL with 563 yards rushing. The Texans gave up 314 yards rushing last week for second most in franchise history and rank last in the NFL by allowing 186 yards rushing a game.

STATS AND STUFF: Eagles WR A.J. Brown had six catches for 156 yards and a career-high three TD receptions last week. He has six games with at least 150 yards since 2019, which is tied for second most in the NFL. He has 563 yards receiving with six touchdowns in six career games against Houston. ... WR Devonta Smith has at least five catches in five of his past six games. ... LB Haason Reddick has 5½ sacks in his past five games and has a sack in his past two road games. ... DT Javon Hargrave had his fifth career game with two sacks last week. ... S C.J. Gardner-Johnson had his fourth career sack and his career-best fourth interception of the season last week. He has an interception in his past three games. ... CB James Bradberry has a pass defensed in seven straight games. ... Houston QB Davis Mills has 2,314 yards passing with 17 touchdowns and four interceptions in nine career home starts. ... WR Brandin Cooks led the team with 73 yards receiving last week. ... DL Jerry Hughes had a sack and two tackles for losses last week. ... LB Christian Kirksey has had at least five tackles in his past nine games going back to last season. He has had at least 10 tackles in his past two Thursday night games. ... Rookie LB Christian Harris led the team with seven tackles last week. ... DB Jalen Pitre has two passes defensed last week. He has had five or more tackles in six of his first seven games. ... DB Steven Nelson had his first interception of the season last week. ... DB Jonathan Owens leads all defensive backs with four games with at least 10 tackles this season.

FANTASY TIP: Eagles TE Dallas Goedert is one of Hurts’ most reliable playmakers, with 32 catches for 421 yards. Goedert, though, has found the end zone just once this season. The Eagles have been taking turns with their receivers having breakout games and Goedert is due. Against the Texas, look for Goedert to become more than just a third down option and score a touchdown or two.