"Earnin' It" an NFL podcast focusing on women in the league 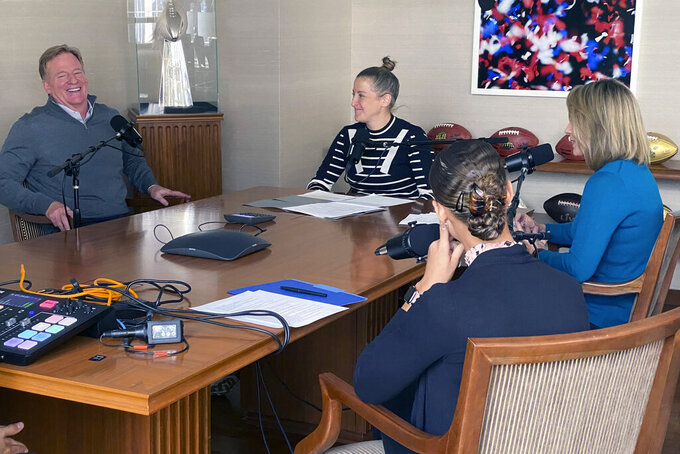 This photo provided by the NFL shows NFL commissioner Roger Goodell laughing while meeting with Sam Rapoport, center left, the league's senior director of diversity, equity and inclusion, Jane Goodell, right, and Venessa Hutchinson, foreground, senior manager of football operations for the NFL in New York on Aug., 27, 2021. For decades, the road to the NFL for women has been filled with obstacles. It’s begun to open up in recent years, and the stories need to be told. Which leads to Sam Rapoport and “Earnin’ It: The NFL’s Forward Progress,′ a podcast launching Tuesday, Nov. 9.(NFL via AP)

The most rewarding path to success in pro sports is by earning it.

For decades, that road in the NFL for women has been filled with obstacles. It's begun to open up in recent years, and the stories need to be told.

Which leads to Sam Rapoport and "Earnin' It: The NFL’s Forward Progress,' a podcast launching Tuesday. Rapoport pitched the idea to Commissioner Roger Goodell after she witnessed how team owners and executives were willing to expand their horizons on the hiring front.

“We reached a true inflection point, unprompted during diversity discussions with head coaches and executives and even some owners,” says Rapoport, the NFL’s senior director of diversity, equity and inclusion and a former professional quarterback who, as a youngster, wrote poems about football. “At a league meeting, coach Ron Rivera stood up and said, ‘Why have you not considered the other half of the population when hiring? We have (Washington Football Team assistant coach) Jen King and other positive experiences.’ And we saw eyes going up and hands started getting raised.

“After that, coach (John) Harbaugh in Baltimore brought on three female intern coaches. That was peer-to-peer influence saying this is working and you should be doing it too. It caused rapid change.”

Rapoport spent six years on the leadership team at USA Football, where she created the Women’s World Football Games, the largest women’s tackle football event in the world. Since joining the NFL in 2003 as an intern, she's advocated for the inclusion and advancement of women in positions at the league office and with teams. In the last five years, nearly 200 female coaching, scouting and operations candidates have been hired.

“The best part of my job is when people say, for the right reasons, I can’t believe I didn’t consider this for so long, can you talk me through this process? Where can I find a female candidate?” says Rapoport, whose enthusiasm and infectious laugh energize “Earnin' It.”

"If anyone is willing to take this step and do what is right — not having females, or males, in any scenario is not natural. I have heard from owners and executives about getting everyone involved.

“I hope that other sports teams listen to that and create similar policies and create more opportunities for women. Women have to be in certain spaces to do their jobs.”

She points specifically to the Cleveland Browns with chief of staff Callie Brownson, and the Tampa Bay Buccaneers with co-owner Darcie Glazer Kassewitz.

Produced by Rapoport, IHeart Media, and the NFL commissioner's wife, Jane Skinner Goodell, a former TV reporter, “Earnin' It” plans to tell the story of progress made by women at all levels of the league. Aside from the conversation with the commissioner, Rapoport will interview such head coaches as Rivera, Bruce Arians, Sean McDermott and Kevin Stefanski; team owners Kim Pegula of the Bills and Kassewitz of the Buccaneers; current assistant coaches King and Brownson; and Sarah Thomas, the first woman to officiate in a Super Bowl.

In January, there will be a five-part TV series from NFL Films also produced by Skinner Goodell.

Goodell recounts his initial pursuit of an NFL job in the first podcast episode, noting that he wrote more than 53 letters and “I got rejected by every single one of them. And some of them are my bosses today, by the way ... owners, executives, I was turned down at the commissioner’s office many times."

"But eventually someone made the mistake of returning a phone call to me and said, `If you’re ever in New York, let me know.' And I said, `I’m in New York.'

Except that Goodell actually was in Pittsburgh and drove all night back to New York.

“And I think he was a little surprised and I just kept after him. And I say, there’s always a fine line between being persistent and being a pain ... and I’m sure I was both. But I think you have to demonstrate that when you want something so badly. When you’re passionate about something, you make it happen. And that to me is the difference between winners and losers.”

The commissioner's wife, who produced the film “A Lifetime of Sundays” about four of the most influential female owners in NFL history, believes the podcast will be a big winner because it is so educational on subjects critical to all walks of life: equity, diversity and inclusion.

“I feel like I have gained a lot of wisdom from everyone we have interviewed,” Skinner Goodell says. "I shouldn’t be surprised at anything anymore, but I have been super enriched.

“The concept is to chronicle what is happening; there's so much change in society today and we just wanted to get it down. If I told you five to six years ago we would have had female coaches on a winning Super Bowl team and Sarah Thomas officiating, you wouldn't have believed me.

"It is a fascinating story, who makes that happen in such a male-dominated industry. It is such a great tale to tell, and Sam is responsible for so much of that.”