Even amid 3-0 start, Seahawks must correct defensive issues 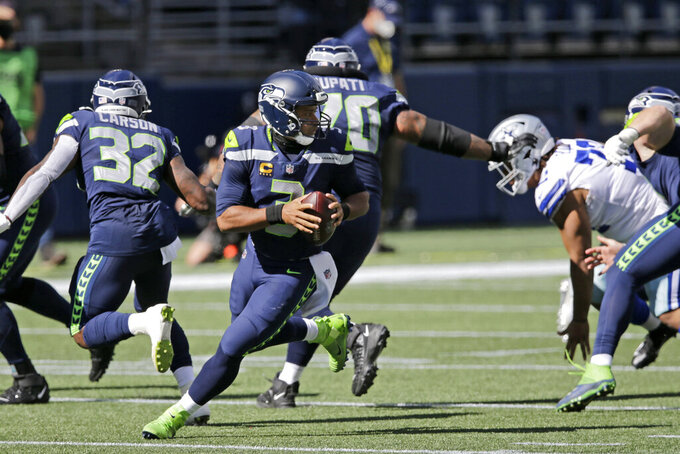 The Seattle Seahawks should have been celebrating after they improved to 3-0 for the first time since their Super Bowl season of 2013 after Sunday’s 38-31 win over Dallas.

But Wagner’s pride and the numbers on the stat sheet told him there was very little to be happy about, at least on the defensive side of the ball.

Seattle is undefeated in perhaps the most un-Seahawks way possible. They are throwing the ball all around the field, relying on the arm of Russell Wilson, who is putting up record numbers through three weeks. Wilson set NFL marks for most TD passes through three games with 14 and became the first quarterback to throw four or more touchdowns in each of the first three weeks.

But on the other side of the ball, Seattle is surrendering points and yards at an alarming rate. They’ve given up nearly 1,300 yards passing. The 86 points allowed by Seattle are third most by an 3-0 team in league history.

The Seahawks are doing well at stopping the run -- 66.7 yards per game -- but why run when it’s so easy to pass?

“We have to do good at something so it’s good to hold teams under 50 yards or 75 yards rushing,” Wagner said. “But when we’re still giving up as many yards as we’re giving up, it doesn’t matter.”

While Seattle seems to be evolving offensively into a more pass-heavy team -- even as coach Pete Carroll continues to preach balance -- the defensive concerns are significant. If the Seahawks can’t find a way to control their opponents' passing game, that’s only going to increase the expectation for Wilson to be great every week.

“I would rather win by a lot, but I don’t mind,” Wilson said. “I don’t mind winning either way. A win is a win and I love winning.”

Wilson’s record pace doesn’t appear to be showing signs of slowing down. He has 14 touchdowns to just one interception. He has just 24 incompletions through three games, hitting on nearly 77% of his throws. Wilson is making quick decisions and throwing with conviction when he finds the matchup he likes.

“All of the touchdown passes, that’s just such a crazy number to be thrown out there in three weeks time,” Carroll said. “Who would have known? But it’s a great start for us there.”

Finding more of a pass rush would certainly help the pass defense. Seattle got to Dallas QB Dak Prescott for two sacks Sunday, one coming from Alton Robinson on the Cowboys' next-to-last play. But two sacks still isn’t enough for the Seahawks and getting pressure will only be more difficult if blitzing safety Jamal Adams misses this week’s game with a groin strain.

LB/DE Shaquem Griffin only had limited snaps, but may have earned a bigger role going forward. Griffin was called up from the practice squad and ended up getting 17 defensive snaps, most coming late in the game. Griffin was able to force Prescott to move in the pocket on a few of his rushes and also dropped in coverage and made a couple of nice plays.

CB Shaquill Griffin. Seattle’s secondary has plenty of problems right now and Griffin’s performance didn’t help. Griffin was beat over the top several times against the Cowboys, including a 52-yard pass to Michael Gallup and Cedrick Wilson’s 42-yard touchdown on a crossing route. Griffin finished with 11 tackles and made an excellent play to undercut a route and intercept Prescott in the first half, but it was an otherwise tough day for Seattle’s top cornerback.

Seattle seemed to avoid season-ending injuries Sunday but has several smaller ones that could impact availability. Guard Damien Lewis (ankle), running back Chris Carson (knee) and center Ethan Pocic (knee) all seem to have a chance to play this week. Carroll sounded a bit hesitant about Adams on Monday, and rookie linebacker Jordyn Brooks could be out a couple of games with a knee sprain.

Also uncertain is the status of CB Quinton Dunbar (knee) and S Lano Hill (back) after both were inactive against Dallas.

Seattle makes the second of its cross-country trips, traveling to Miami on Sunday. Seattle hasn’t played in Miami since 2012, a game the Dolphins won 24-21.