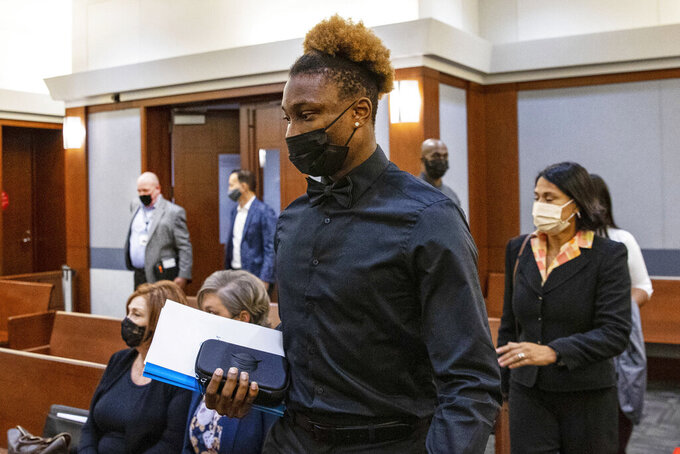 Justice of the Peace Ann Zimmerman set a new date, May 19, for the hearing at which she'll determine whether Ruggs will stand trial in state court on felony driving under the influence and reckless driving charges.

Ruggs faces a mandatory two years in prison and maybe more than 50 years if he’s convicted. He also is charged with misdemeanor gun possession after police reported finding a loaded handgun on the floor of his demolished Chevrolet Corvette.

The 23-year-old former first-round NFL draft pick didn’t have to appear with Chesnoff in court. He remains on house arrest with electronic GPS and alcohol monitors.

Ruggs and his girlfriend, Kiara Je’nai Kilgo-Washington, were hospitalized after the crash. The extent of their injuries has not been made public, although Clark County District Attorney Steve Wolfson has said prosecutors were told Ruggs suffered a leg injury and Kilgo-Washington underwent arm surgery.

Kilgo-Washington’s attorney is fighting in court to prevent prosecutors from obtaining her medical records, which prosecutors need to prove the crash caused substantial bodily injury.

Ruggs wore a neck brace and remained seated in a wheelchair during his initial court appearance the day after the crash. By then, the Raiders had released him from the team.