Fangio has found the right mix on Denver's defense 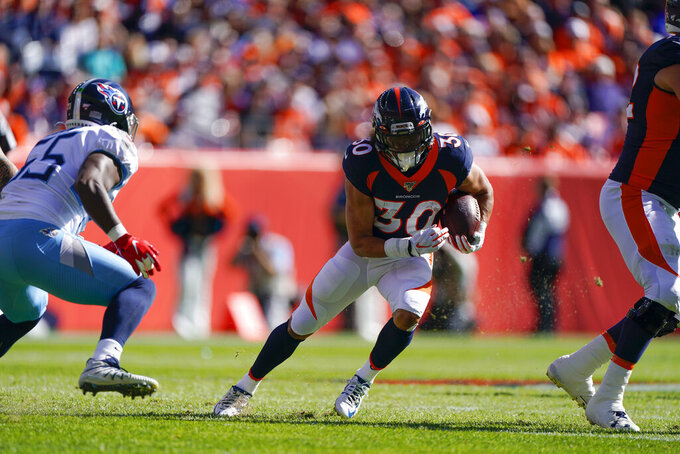 Denver Broncos running back Phillip Lindsay, center, runs with the ball during the first half of an NFL football game against the Tennessee Titans, Sunday, Oct. 13, 2019, in Denver. (AP Photo/Jack Dempsey)

The Broncos (2-4) collected seven sacks and three takeaways for the first time since 1984 in their 16-0 win over Tennessee on Sunday, putting them in prime position to get back into the AFC West race Thursday night when they host the Kansas City Chiefs (4-2) and their ailing quarterback Patrick Mahomes.

That seemed far-fetched two weeks ago when the Chiefs were rolling and the Broncos were reeling. The franchises' fortunes have flipped with KC losing twice at home and Denver ending four-game skids at home and on the road.

Plugging in players at all three levels is what helped Fangio get his first wins.

Up front, he put Mike Purcell at nose tackle and moved Shelby Harris to defensive end. He inserted inside linebacker Alexander Johnson into the lineup and he's collected 19 tackles, 1½ sacks, two QB hits and a forced fumble in his first two NFL starts.

The Broncos' biggest bugaboo has been their secondary because Callahan, who signed a three-year, $21 million deal in free agency to follow Fangio to Denver, reinjured his surgically repaired foot in July and hasn't played since.

"It's been frustrating for everybody, including him," general manager John Elway said, adding he was unsure "if he'll be able to get back this year or not."

Fortunately for Fangio, tone-setter Kareem Jackson is back from a sore hamstring and giving CB Davontae Harris his first NFL start Sunday was a spectacular success. Along with Chris Harris Jr. and Justin Simmons, Jackson played all 70 snaps.

The Broncos claimed him off waivers from Cincinnati on Sept. 1.

"What's that saying? One man's trash is another man's treasure. You know, he didn't make Cincinnati's squad, so we're glad to have him," Fangio said.

It was the secondary's sound play that Fangio credited with allowing Von Miller, DeMarcus Walker, Derek Wolfe, Shelby Harris and Johnson to get in on the sack party Sunday.

Accordingly, it was the pass pressure that helped produce the trio of takeaways .

"We're very excited in where we're at," Walker said. "We fought adversity in the beginning of the year and it's not like our first few losses were blowouts. We had a chance in every single loss. We knew that we were capable and we just had to keep working."

Walker had his first career multiple-sack game Sunday with a pair of takedowns on inside rushes, giving him a team-leading three sacks overall. "I was picked two for a reason," said Walker, who had one sack in each of his first two seasons and is finally showing everyone why Elway selected the former Florida State star and rare inside pass rusher in the second round of the 2017 NFL draft.

The offense. Since scoring TDs on their first two possessions at Los Angeles, the Broncos have reached the end zone just once in their last 22 drives, subtracting kneel-downs. Teams are doubling WR Courtland Sutton in the red zone and nobody's picked up the slack.

The RB tandem of Phillip Lindsay and Royce Freeman. Lindsay ran for 70 yards and the game's only TD and Freeman led the team with five catches for 42 yards to go with 34 yards rushing. Lindsay (544) and Freeman (429) are the only pair of running back teammates with at least 400 yards in 2019.

RG Ronald Leary has surpassed grabby LT Garett Bolles for the team lead in penalties. Leary has two false starts to go with six holding calls — and that doesn't count his holding back of LG Dalton Risner, already the best O-lineman on the roster, from doing too many interviews lest the rookie get too much pub.

0 points. "Shutouts are hard to come by in this league," Fangio said. "We need somebody to do an analytics study about how often they do come." OK, there's about seven in a season of 256 games, or 2.7% of the time. Intriguingly, Fangio worked 32 seasons as an NFL assistant and his teams posted 14 shutouts in 512 games, exactly the league average.

The Broncos need to keep their ground game rolling Thursday night, not only to keep Mahomes & Co. off the field but to capitalize on KC's biggest weakness . Over their last four games, the Chiefs have allowed an average of 190 yards a game and 4.97 yards a carry. They've also allowed eight rushing TDs in those games.