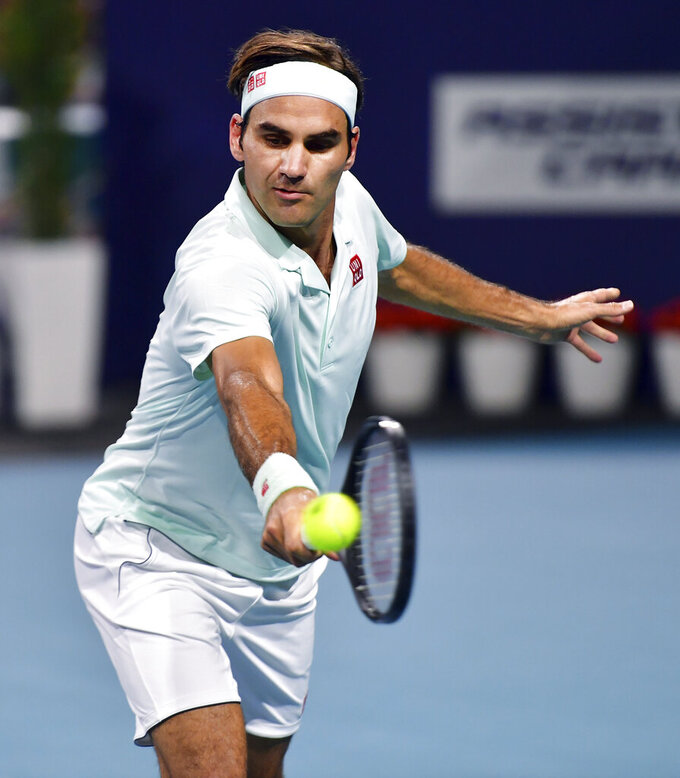 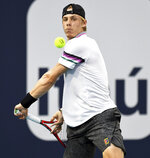 MIAMI GARDENS, Fla. (AP) — For an NFL stadium, it will be a different kind of Sunday showdown: Roger Federer against John Isner.

Both won Friday and advanced to the final of the Miami Open, which moved this year to the Dolphins' complex from its longtime Key Biscayne home.

Both finalists give the new tournament site a thumbs-up, partly because they've done so well the past week.

"The venue is absolutely fantastic," said Isner, a big football fan. "To play in the stadium — the Super Bowl will be here next year — it's pretty amazing."

The atmosphere was lively for both matches, and each time experience triumphed. The age gap with Shapovalov was the largest of the 37-year-old Federer's career, and he used a wide array of shotmaking to take control with two early breaks.

"It was a tactical match by me," Federer said. "I'm happy I was able to play with variations."

Seeded No. 4, Federer improved to 17-2 this year. He lost in this month's Indian Wells final to Dominic Thiem and now seeks his fourth Miami Open title.

Federer is 5-2 against Isner, but they haven't played each other since 2015.

Isner, now 33, won his only ATP Masters title a year ago on Key Biscayne.

"It's amazing — I said before the tournament the chances were I would not defend my title," Isner said. "I'm very, very happy."

The 6-foot-10 American hit 21 aces in the semifinal and has 98 in five tournament matches. Federer laughingly said he'll brace for a barrage.

"I know what to expect," Federer said. "On Sunday I'll be the goalie and try my very best."

The women's final Saturday will match No. 5 Karolina Pliskova of the Czech Republic against No. 12 Ashleigh Barty of Australia.

The largest stadium crowd of the tournament watched Federer deploy his full repertoire against Shapovalov. That included a lunging stab volley for a winner, a half-volley drop shot for another winner, and a nifty chipped return while Federer held the racket like a flag, strings in front of his face.

"He's got every shot mastered," said Shapovalov, who considers Federer his idol. "When he needs a shot, he's going to go for it and he's going to make it. I don't think he has any weaknesses."

Shapovalov will climb to a career-best No. 20 in the rankings despite his defeat.

"Denis is a great player," Federer said, "and he will be even better in the future."

Like Shapovalov, Auger-Aliassime came up short in a bid for his first ATP Masters 1000 final. He served for both sets, but Isner broke each time by taking advantage of double-faults, and then used his big serve to control the tiebreakers.

Nine of his 10 sets in the tournament have gone to a tiebreaker, and he has won each one. But Auger-Aliassime figured neither set should have gotten to that point.

"It's a chance you can't miss, serving two times for the set," he said. "Just terrible."

Auger-Aliassime, 5-0 previously against top 20 opponents, was the youngest male semifinalist in the tournament's 35-year history. He'll jump to a career-best No. 33 in next week's rankings.

But he'll need steadier play at pivotal moments to fulfill his potential as a future Grand Slam champion.

Isner lost serve for only the third time in the tournament to fall behind early. Auger-Aliassime served at 5-4 but double-faulted into the net three times, including on break point.

There was a repeat in the second set. Auger-Aliassime served at 5-3, double-faulted once and then hit a swinging volley into the net on break point.

"It's like I caught a virus or something," he said. "I couldn't put a second serve in anymore. That's just very tough to swallow."

Each lapse led to a tiebreaker, where Isner has been unbeatable of late after arriving at Miami with a modest 7-10 record in tiebreakers this year.

He finished strong against Auger-Aliassime, whacking three aces in the final tiebreaker, the last on a 140 mph serve that was his fastest of the match.

"I'm playing well," Isner said. "Keep it up and see what happens."