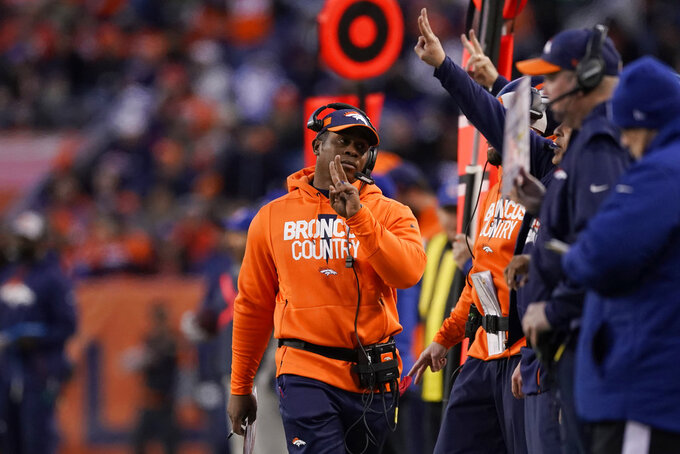 Joseph will be in Cincinnati on Thursday and Friday to talk to owner Mike Brown and members of the front office. The Bengals' familiarity with Joseph works in his favor. Joseph was the defensive backs coach under Lewis in 2014-15.

Hue Jackson also is among those under consideration for the job and got Lewis' endorsement as his successor.

The Bengals are conducting their first head coaching search since the end of the 2002 season, when Dick LeBeau was fired. Lewis got the job, the first outsider brought in by Brown. He elevated the franchise from forlorn to playoff contender, but he couldn't win a postseason game in 16 seasons.

A third straight losing season and a third straight year of falling attendance prompted Brown to finally part ways with Lewis, who is 0-7 in the playoffs. The overriding question is whether Brown, who is averse to major change, will choose someone familiar or go outside the organization for his next head coach.

The Bengals plan to interview a wide range of candidates over several weeks before choosing one.

Joseph was fired by Denver on Monday after a 6-10 finish and an 11-21 mark in his two seasons, the worst two-year stretch for the Broncos since the 1960s. Brown has shown a willingness to overlook won-lost records — he kept giving Lewis extensions — if he feels a philosophical connection to a coach.

Jackson is the other candidate with head coaching experience and close ties to the Brown family. He spent eight years on Lewis' staff in a variety of roles, including receivers coach, defensive backs coach, running backs coach, offensive coordinator and special assistant on defense.

The Bengals quickly rehired Jackson when the Browns fired him in October after only three wins in two-plus years. He became Lewis' special assistant on defense, a loosely defined role that included preparing the game plan each week and talking to players on the sideline during games.

Lewis endorsed Jackson to be his successor during his farewell news conference on Monday.

Cleveland had a resurgence after Jackson was fired in October, winning five of their last seven games. Hiring Jackson would send a message to fans that the organization isn't going to change very much.

The Bengals also reportedly are interested in Kansas City offensive coordinator Eric Bieniemy, who has ties with Cincinnati. Bieniemy was a Bengals running back and kick returner from 1995-98. Several teams are interested in Bieniemy, with the Jets confirming on Twitter that they'd interviewed him Wednesday.