Gamble doesn't pay off for Ravens in loss to Steelers 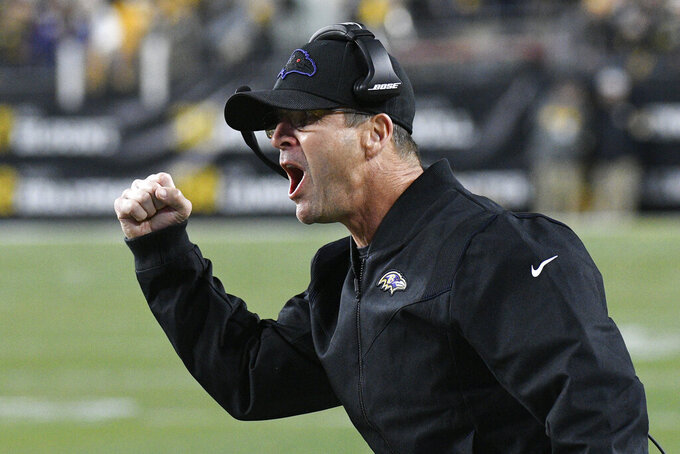 Baltimore Ravens head coach John Harbaugh celebrates after tight end Mark Andrews made a catch near the goal line against the Pittsburgh Steelers during the first half of an NFL football game, Sunday, Dec. 5, 2021, in Pittsburgh. (AP Photo/Don Wright)

PITTSBURGH (AP) — John Harbaugh went for the win, and it didn't work out for the Baltimore Ravens.

Lamar Jackson led Baltimore to a touchdown with 12 seconds to play, but his throw on the 2-point conversion was too far in front of tight end Mark Andrews. That oh-so-close play sent the Ravens to a 20-19 loss to the Pittsburgh Steelers on Sunday.

Harbaugh pointed to the play of his injury-depleted secondary — a list that now includes star Marlon Humphrey, who left in the second half with an issue Harbaugh did not disclose — as the main reason to avoid overtime.

But Jackson and the Ravens (8-4) weren’t finished.

Jackson overcame a false start and a sack during the Ravens’ eight-play, 60-yard scoring drive. Jackson also converted a pair of third downs, including a third-and-14 and a third-and-5, which resulted in a 6-yard touchdown grab by Sammy Watkins.

But rather than turn to star kicker Justin Tucker for an almost automatic 35-yard extra point, the Ravens went for the knockout punch.

“I was in the moment,” Jackson said. “We just scored. I was cool with it. I wanted to win. I didn’t want to go to overtime anyways.”

The Steelers, as they did throughout the day, brought pressure during the 2-point conversion attempt. Star linebacker T.J. Watt hurried Jackson’s throw to an open Andrews, and the ball went off the tight end’s fingertips in the flat and bounced away.

“T.J. Watt’s got range,” Jackson said. “He’s a long guy. I had to throw around him and try to make something happen. That’s all. Just came up short.”

Jackson was sacked seven times. Watt had a career-high 3 1/2 sacks and Chris Wormley, who was acquired in a March 2020 trade with Baltimore, finished with 2 1/2 sacks.

“Seven sacks is too many,” Harbaugh said. “It’s way too many. That’s on us as a coaching staff to get that cleaned up.”

It was the third game in series history between the Ravens and Steelers decided by one point. The Steelers have won all three of those games — all started by Roethlisberger. Roethlisberger threw for 236 yards and engineered his 39th fourth-quarter comeback, but it took a last-second defensive stand on a 2-point play to help Pittsburgh (6-5-1) end a three-game winless streak.

Baltimore visits Cleveland for another key division game on Sunday. The Ravens, who lead the AFC North, beat Cleveland 16-10 on Nov. 28.

Jackson passed for 253 yards with a touchdown and a first-quarter interception. The Ravens held a massive edge through three quarters in total yards and time of possession, which included a 10-minute, 99-yard scoring drive, but they only had a 10-3 lead to show for it.

That allowed Roethlisberger and the Steelers to rally in the fourth.

Jackson put Baltimore in position for overtime. Harbaugh and the Ravens wanted the win, and they ultimately fell short.

“Honestly, if we would’ve converted the 2-point conversion, we would’ve been having a different conversation right now,” linebacker Josh Bynes said. “We’d be talking about how we found a way to win. At the end of the day, they found a way to make one play and we didn’t. That’s what it came down to. They made one extra play. They got one extra point than us and they came out victorious.”