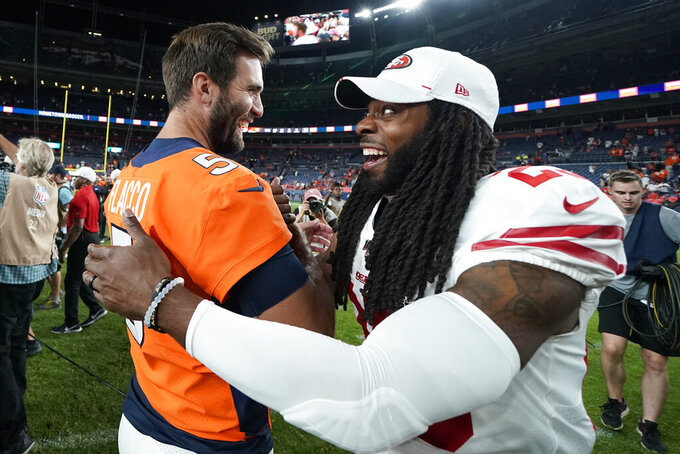 After thoughts of his double-ankle surgery nearly brought him to tears in the tunnel before the game, Sanders caught a 5-yard pass from Joe Flacco on the Broncos' first offensive play and added a 19-yard run on a reverse in his first game since tearing his left Achilles tendon in practice last December.

He also hauled in a 45-yard reception that was erased by left tackle Garett Bolles' holding penalty, but what he lamented most was not scoring on the reverse.

"The old 'E' would have scored," Sanders said.

"Unfortunately, we got the holding call," Sanders said. "But it felt good to be back on the football field, making plays and exciting the crowd. This is my adrenaline rush."

Garoppolo was glad to get back on the field, too, even though he went just 1 for 6 for zero yards and an interception in his first game since suffering a season-ending knee injury last September.

"It's something I haven't done in a year obviously, so I've got to knock the rust off," Garoppolo said. "Thankfully we have a short week this week so we can bounce back quickly. First step of getting back into it."

Garoppolo's first pass was knocked down by defensive lineman Shelby Harris and his second one was intercepted by cornerback Isaac Yiadom when he was pressured by Bradley Chubb. His third pass was tipped and cornerback De'Vante Bausby broke up his fourth attempt.

Chris Harris Jr. pressured Garoppolo into an incompletion from his end zone before Garoppolo finally completed a screen pass to running back Matt Breida, who was corralled by Shelby Harris at the San Francisco 6 for no gain.

"It's a big hurdle to get out there for the first time but we haven't seen any issues with the knee," 49ers coach Kyle Shanahan said. "I forget about it except he's wearing a brace."

The knee wasn't on Garoppolo's mind, either.

"I wasn't thinking about it so I was happy about that," Garoppolo said. "It didn't bother me too much."

Broncos safety Justin Simmons said that while he was pleased with how Denver stifled Garoppolo, the quarterback's stat line was by no means a barometer of where he is in his comeback.

Based on their work together over three days, Simmons said football fans should expect big things from the Niners' offense and Denver's defense this season.

Broncos rookie QB Drew Lock jammed his right thumb when he was sacked on the first series of the second half, cutting short his most significant action of the preseason in his quest to win the backup job, and Kevin Hogan finished up.

"I jammed my thumb playing basketball a thousand times," Lock said, adding he hoped to play next weekend.

This marked Flacco's first game in front of his new home crowd.

"It was a lot of fun. I know it's not a full stadium yet (13,447 no-shows)," Flacco said. "One thing I really noticed: you could tell Peyton played here because when the offense has the ball, man, you could hear a pin drop. That was a little different, to be honest with you.

"It's always quiet obviously for the home team when they're on offense, but that was a little extra. I feel like I heard my voice echoing in the stadium," Flacco said. "So, I was a little thrown off by that."

49ers: Play at the Kansas City Chiefs on Saturday night.

Broncos: Play at the Los Angeles Rams on Saturday night.