Garoppolo focuses on playoffs rather than uncertain future 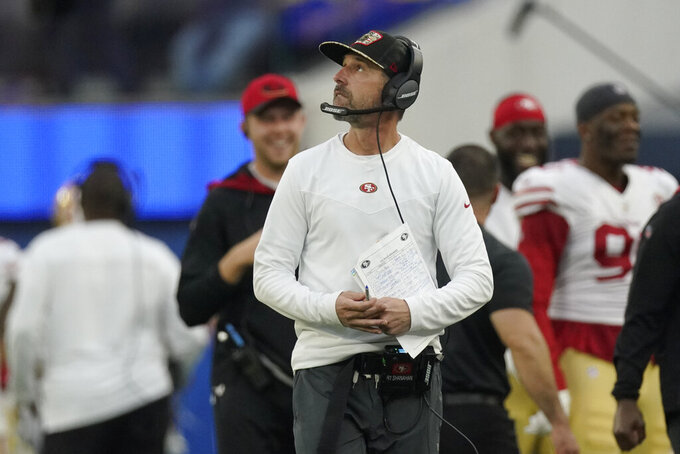 SANTA CLARA, Calif. (AP) — Jimmy Garoppolo's long-term future as quarterback in San Francisco has been in doubt ever since the 49ers traded away three first-round picks in the spring to make Trey Lance the heir apparent at the position.

The present has Garoppolo ready to lead the Niners into the playoffs with a wild-card meeting on Sunday at Dallas in what once again could be his final start for San Francisco.

“It’s always in the back of your mind," Garoppolo said Wednesday. “It has been in mine really this whole season. I knew what type of season it was, knew everything that was going on behind the scenes and whatnot. So it was a little different. But, at the same time, you’ve got to toe that line because you don’t want to get too emotional in those moments. You’ve just got to go play football when it comes down to it, but, the human side definitely comes into play.”

Garoppolo has done a good enough job playing football to be in this position once again, leading the late game-tying drive in regulation against the Rams last week to get San Francisco back into the postseason.

He has run coach Kyle Shanahan's offense efficiently even if his play has been far from spectacular. Garoppolo averaged 8.6 yards per attempt in the regular season while throwing 20 TD passes. But he also had 11 interceptions and did much of his work on short passes and relied on his playmakers for explosive plays.

But the Niners stuck with Garoppolo even when he had a few struggles during a stretch early in the season as they held to their goal of trying to compete this year with him, while giving Lance time to develop.

“We did think Jimmy was still giving us the best chance and we wanted to give Trey more time, not only just for him, but also for our team,” Shanahan said. "So it wasn’t a tough decision. We just stuck with it because that’s what the right decision was based off of film and based off of what we are in our building and our practice. I’m glad the guys have come through and got us to this point and I’m real glad we’re still playing.”

Garoppolo is hoping for a better performance this time in the playoffs than he had two years ago. San Francisco got to the Super Bowl behind a dominant defense and running game with Garoppolo throwing only 27 passes for 208 yards in wins over Minnesota and Green Bay.

Then he played well for three-plus quarters in the Super Bowl and had the Niners in position to win it with a 10-point lead before a fourth-quarter collapse.

Garoppolo went 3 for 11 for 36 yards and an interception in the final quarter, coming up empty on all four drives, including when he missed an open Emmanuel Sanders on a deep ball that could have given San Francisco a late lead.

Now he has another chance to redeem himself and extend his time with the Niners either deeper into the postseason or perhaps for another season if things go extremely well.

“I love this team, love the players, love everything about it,” he said. "It’s a good group to be around, fun group. We want to keep this thing going for as long as we can now.”

By Tom Withers just now
By Dennis Waszak Jr. 14 minutes ago
By Josh Dubow 12 hrs ago
By Mitch Stacy 13 hrs ago
By Mark Long 13 hrs ago