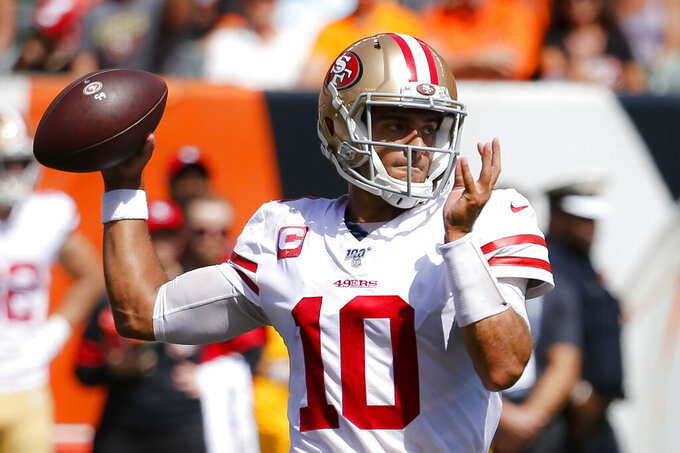 CINCINNATI (AP) — The ice cream was sweet, the Holiday Inn was quiet, the bonding time was plentiful. The San Francisco 49ers enjoyed their weeklong stay in Youngtown, Ohio, which got them ready for their final stop on the way home.

Cincinnati provided a most hospitable layover.

A 41-17 victory over the Bengals on Sunday completed the 49ers' long stay on the road and left them in rare air heading back to the West Coast. They're 2-0 for the first time since 2012 and looking very much like a contender.

"This is a franchise that won five championships, and we're trying to get back to that," cornerback Richard Sherman said. "It's a work in progress."

In this one, everything worked.

Jimmy Garoppolo tied his career high with three touchdown passes, Matt Breida ran for 121 yards, and San Francisco pulled off one big play after another while piling up 572 yards for the first time in seven years. The 49ers have opened with back-to-back road wins for the first time since 1989, when Joe Montana's crew was coming off its second Super Bowl win over the Bengals.

They have a fondness for the Buckeye State.

Rather than return to the West Coast after their opening 31-17 win in Tampa Bay, the 49ers headed to Youngstown, where they worked out on a soccer field, enjoyed a local ice cream shop and rested at a Holiday Inn.

"The week in Youngstown definitely paid off," said Garoppolo, who was 17 of 25 for 297 yards. "There was extra time to be around each other and talk about things."

By contrast, it couldn't have gone much worse for Bengals first-year coach Zac Taylor in his regular-season debut at Paul Brown Stadium.

The crowd of 50,666 began filing out after the third quarter. Cincinnati's defense had repeated breakdowns and missed tackles, and the offense managed only 25 yards rushing as the Bengals fell to 0-2 for the second time in the last three years.

The 41 points were the most allowed by the Bengals in a home opener.

"We didn't give the fans anything to be excited about," Taylor said.

An opening 21-20 loss at Seattle gave the Bengals hope that things would be better after three straight losing seasons. Instead, Seattle looked more like a mirage as the 49ers rolled ahead 31-10 after their opening drive of the second half, culminating in Garoppolo's third touchdown pass.

After an unproductive game at Tampa Bay that marked his return from knee surgery, Garoppolo was much sharper the second time around, taking full advantage of numerous breakdowns in the Bengals' coverages. The offense dominated all-around, piling up 259 yards rushing and averaging 6.2 per carry.

"It was an amazing feeling, going out and knowing you can run the ball down their throats," said Breida, who averaged 10.1 yards per carry.

Marquise Goodwin went unguarded for a 38-yard touchdown catch on their opening series, and Raheem Mostert turned a screen pass into an easy 39-yard score . The 49ers piled up 291 yards in the first half — more than they had in the opener — with three plays of at least 34 yards.

They had the look of a team excited to be heading home.

"To be on the road for 10 days — that adds up," coach Kyle Shanahan said. "I thought our guys were juiced today."

The Niners had three interceptions in the win at Tampa Bay, one more than all last season. They got another Sunday from linebacker Kwon Alexander.

On a drive to a field goal late in the first half, Garoppolo lateraled to receiver Dante Pettis, who threw back across field to Mostert for a 16-yard gain.

49ers: Left tackle Joe Staley broke the fibula in his left leg in the third quarter. The 49ers think he could return in less than eight weeks.

Bengals: The line suffered more sapping injuries. Left tackle Cordy Glenn missed a second straight game in concussion protocol, and backup Andre Smith suffered a groin injury in the first half. Rookie guard Michael Jordan was taken off on a cart in the fourth quarter with a left knee injury... Defensive end Carl Lawson hurt his right hamstring in the second half.

Bengals: at Buffalo next Sunday.