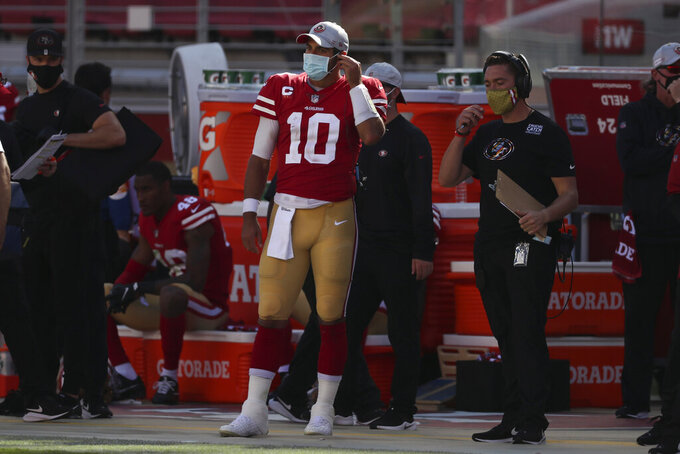 San Francisco 49ers quarterback Jimmy Garoppolo (10) stands on the sideline during the second half of an NFL football game against the Miami Dolphins in Santa Clara, Calif., Sunday, Oct. 11, 2020. (AP Photo/Jed Jacobsohn)

SANTA CLARA, Calif. (AP) — Jimmy Garoppolo’s sprained right ankle felt much better this week in practice, making the San Francisco 49ers confident their quarterback can bounce back from a rough performance last week that got him pulled at halftime.

Garoppolo initially injured the ankle in a Week 2 win against the New York Jets and returned last Sunday against Miami after being limited most of the week at practice. He never looked comfortable and threw two interceptions before getting pulled at halftime during a 43-17 loss to the Dolphins.

Garoppolo was a full participant in practice all week for the Niners (2-3) leading into Sunday night’s home game against the Los Angeles Rams.

“It’s feeling great this week. It really is,” Garoppolo said Friday. “Just made a lot of improvements, just a couple extra days I think to consistently get better. So, it’s just one of those things you’ve just got to keep working at it.”

Coach Kyle Shanahan said this week that the high ankle sprain is something Garoppolo will have to deal with for a while.

But Shanahan said he doesn’t believe it will hamper Garoppolo as much as it did last week when he struggled to push off his plant foot, contributing to his second interception that sailed high over the intended target.

“I’m not thinking about the ankle and I don’t think he is going into the game,” Shanahan said. “I think you try to get to a point where you’re healthy enough to play, which a lot of guys are at, but a lot of guys have injuries they’ve got to play through. It’s the point of where you’re at in that. I think Jimmy’s at a better spot this week than he was last week. So, I don’t think about the ankle in that case. I expect him to go out and play well and that’s how I’ll judge him.”

Garoppolo went 7 for 17 for 77 yards before getting pulled and was also sacked three times. The entire offense struggled in the first game that the Niners had all of their projected starters from the preseason in the lineup.

A series of injuries that have sidelined Garoppolo, All-Pro tight end George Kittle, running back Raheem Mostert, receivers Deebo Samuel and Brandon Aiyuk and center Ben Garland have made it difficult for the Niners to get into a rhythm offensively because of a lack of practice time.

All those players are healthy now and practiced all week in a development the 49ers hope will lead to better results on the field.

“It’s tremendous,” Garoppolo said. “When you get guys out there and we’re doing the same plays with the same people and you start to get a feel for one another, it takes time. It’s one of those things that it’s not going to happen overnight. We know that. So, it’s just about putting in the time on the field, off the field, interacting with one another and just getting on the same page as fast as we can.”

The defending NFC champions are running out of time to get things going in the right direction. Back-to-back home losses to Philadelphia and Miami have left them with a losing record through five games and a deficit in the division to rivals Seattle (5-0) and the Rams (4-1).

NOTES: LB Kwon Alexander will miss the game but likely won’t have to go on IR with an ankle sprain. ... CB Dontae Johnson (groin) is also out this week. ... CB Emmanuel Moseley, S Marcell Harris (ankle) and RB Jeff Wilson Jr. (calf) are questionable. ... DE Ronald Blair (knee), C Weston Richburg (knee), DL Jullian Taylor (knee) were eligible to start practicing next week but will likely remain on the PUP list until some time between Week 10-12. Blair had a setback in his recovery.