Giants and Bears are among the top surprises early in 2022 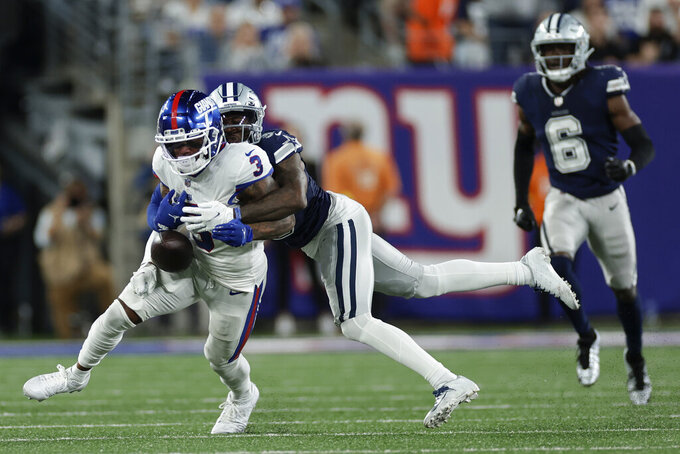 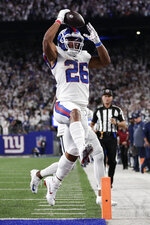 OPENING LINE: Giants by 3 1/2, according to FanDuel SportsBook.

TURNOVER DIFFERENTIAL: Bears plus-1; Giants even.

BEARS PLAYER TO WATCH: QB Justin Fields. Former general manager Ryan Pace traded up nine spots with the Giants to draft Fields with the No. 11 overall pick last year, and the move has not paid off. Coming off a shaky rookie season, Fields is off to a rough start in Year 2. The former Ohio State star ranks last among qualifiers in attempts (45), completions (23), completion rate (51.1 percent), yards (297) and rating (50.0). He has twice as many interceptions (four) as touchdowns (two).

GIANTS PLAYER TO WATCH: RB Saquon Barkley. The No. 2 overall pick in the 2018 draft is showing the form he had in being the NFL Offensive Rookie of the Year. His 317 yards rushing are second in the NFL. He has had three rushes of 20 yards or more, including a 36-yard touchdown run against the Cowboys. His longest run of the season was a 68-yarder that set up a short TD run by him. His 408 yards from scrimmage are No. 1 in the league.

KEY MATCHUP: Bears defensive end Robert Quinn against LT Andrew Thomas, the Giants best lineman. Quinn has had a sack and a forced fumble in each of the past two games against New York. He has had 6 1/2 sacks and six tackles for losses in his past six road games. The Giants have had trouble protecting quarterback Daniel Jones, who has been sacked 13 times. Rookie right tackle Evan Neal gave up three to Dallas' DeMarcus Lawrence on Monday night.

SERIES NOTES: The Bears have won the past three games.

STATS AND STUFF: Bears: WR Darnell Mooney has four receptions for 27 yards. He had 81 catches for 1,055 yards last year in his second season. ... TE Cole Kmet had 40 yards on two receptions last week after not catching a pass the first two games. ... S Eddie Jackson picked off a pass in the end zone last week, giving him two interceptions this season, and forced a fumble. ... LB Roquan Smith had team-high 16 tackles and set up Santos’ game-ending field goal with an interception deep in Houston territory. ... Giants: Daniel Jones is coming off one of his best games, rushing for 79 yards and throwing for 196 yards. ... PK Graham Gano has kicked seven field goals in the past two games, including four of 50 yards or better. ... WR Richie James leads the Giants with 14 catches for 146 yards. ... S Julian Love had 14 tackles Monday. ... New York had a PAT blocked Monday and has allowed an average of 15.3 yards on seven punt returns.

FANTASY TIP: RB Khalil Herbert. The Bears had their biggest rushing game since Walter Payton was carrying the ball in 1984 with 281 yards last week. Herbert carried the load after Montgomery was injured, and the second-year back gained a career-high 157 yards on 20 carries. The Giants gave up 176 yards rushing to the Cowboys on Monday night.