Giants QB Jones willing to let Barkley have the spotlight 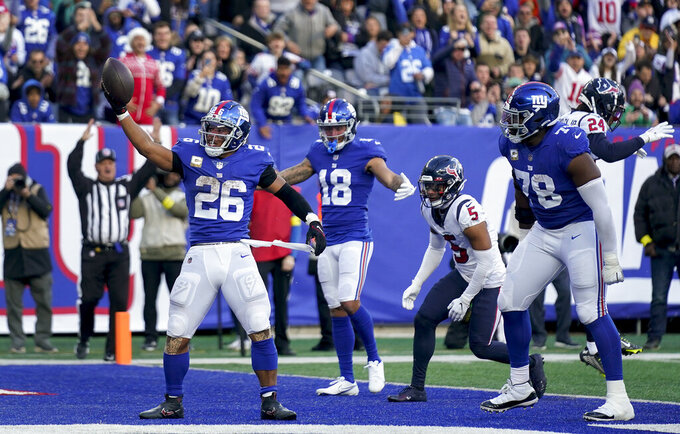 EAST RUTHERFORD, N.J. (AP) — Quarterback Daniel Jones isn't lobbying for a bigger role in the offense after spending most of last week handing the ball to New York Giants running back Saquon Barkley.

If coach Brian Daboll wants Barkley to carry the ball 35 times again when the Giants (7-2) face the Detroit Lions (3-6) on Sunday, Jones isn't going to complain.

“I think we all just want to win,” Jones said Wednesday after practice. “Regardless of what position you play you want to win, you want to score as many points as you can and win the game. That’s where we’re all focused, that’s where I’m focused. We’ve won in different ways this year and depending on what the defense is doing, depending on how the game's going, we’ve adjusted our style.”

Barkley gained 152 yards rushing on a career-high 35 attempts against Houston this past weekend and scored a touchdown as the Giants returned from their bye week with a 24-16 win over the Texans.

Jones contributed a little less frequently. He completed 13 of 17 passes for 197 yards. What was important was he also threw two touchdowns and had a 153.3 quarterback rating, his highest in four years in the NFL. The sixth pick in the 2019 draft also didn't throw an interception for the sixth straight game.

Daboll said the Giants game plan is based on what they think gives them the best chance to win. The Texans were last in the league against the run, so the Giants ran the ball.

The Lions are more explosive, Daboll noted, so that might lead to Jones throwing a little more.

“Whatever we need to do, that’s what we’re charged with,” Daboll said when asked if Jones could win a shootout.

“Every game’s different. Every situation in games that come up are different. We just try to call it and game plan the way we think we need to.”

Daboll brushed aside a question about whether he liked shootouts since he was the offensive coordinator for the Buffalo Bills the past four seasons.

Jones finds shootout fun. He recalled being in one against Washington late in his rookie season.

“Anytime you get in those situations where the ball (is) in your hand trying to win the game, that’s a fun situation to be in,” Jones said.

Jones is having his best season, and it could not have come at a better time. The Giants didn't pick up the fifth-year option on his rookie contract, so he will be a free agent at the end of the season, unless the team gives him a new contract or franchises him.

Jones said Wednesday he has not gotten a new contract, and he is not thinking about one. He just wants to keep winning games.

NOTES: Rookie starting right tackle Evan Neal, the No. 7 pick in the draft, practiced on a limited basis for the first time since hurting a knee against Jacksonville on Oct. 23. Trye Phillips has started the past two games for him. ... TE Daniel Bellinger, who sustained an eye injury against the Jaguars that required surgery, is still working his way back. ... LB Azeez Ojulari, who has been on injured reserve with a calf problem, is hoping to return for the Dallas game on Thanksgiving. It's more likely he'll get extra time and return on Dec. 4 against Washington. ... Two defensive starters did not work out. DT Dexter Lawrence was rested because of his back and LB Kayvon Thibodeaux was ill.