Giants starting to play better, but season slipping away 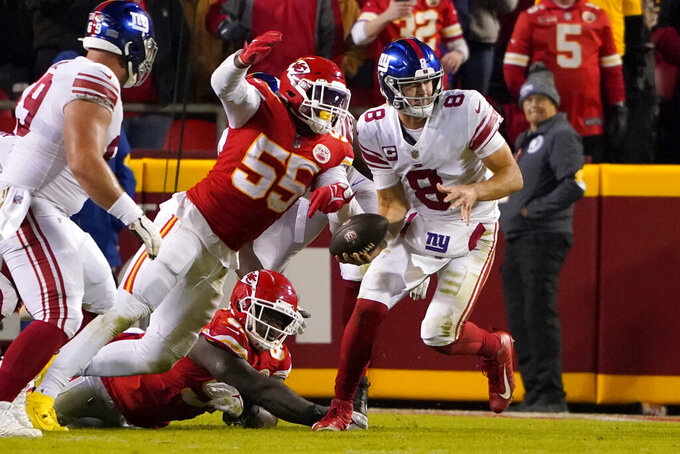 EAST RUTHERFORD, N.J. (AP) — Looking at the past two games, the New York Giants are starting to play a lot better.

While the injury-ravaged offense is struggling to put up points with running back Saquon Barkley, receiver Kenny Golladay and three starters missing, the defense has resembled the unit that kept New York in games last season.

That was the case Monday night when the Giants stayed close before dropping a 20-17 decision to the underperforming Kansas City Chiefs after an offside penalty took away a late chance to take the lead.

“We try not to look into the past too much. But this game definitely hurt,” cornerback James Bradberry said. “This is the next game we played, and it was a ‘Monday Night Football’ game, and we really needed this game. It was a good team we played against. It definitely would have boosted our morale going into next week. We’re just disappointed that we lost this one.”

There's plenty of bad news. The Giants are 2-6. They are last in the NFC East, with Washington (2-6), holding the tiebreaker based on head to head. They have nine games left and the only team they face with a worse record is the Miami Dolphins (1-7).

A glance at the standings sheds little hope New York will make the playoffs for the first time since the 2016 season. While seven teams from each conference make the postseason, the No. 7 spot currently is held by Carolina (4-4). The Giants are 15th, ahead of only winless Detroit.

Next up is the AFC West-leading Las Vegas Raiders (5-2), who are well rested coming off a bye.

The defense has been outstanding the past two games.

After holding Carolina to 173 yards and a field goal last week, Pat Graham's unit limited Patrick Mahomes and the Chiefs to 20 points. The first seven came after Daniel Jones' interception gave Kansas City the ball at the 13. Kansas City gained 368 yards on 77 plays, an average of 4.8 yards. Speedster Tyreek Hill caught 12 passes for 94 yards, and the passing game netted 5.2 yards on 29 receptions. The Chiefs were 2 of 6 in the red zone. There were no plays of more than 20 yards until the Chiefs' game-winning field-goal drive.

The return men. Playing the position may require hazard pay. Receiver C.J. Board broke his arm on a kickoff return against the Rams. Safety Jabrill Peppers tore his ACL on a punt return in the win over Carolina. Receiver Dante Pettis, who threw a highlight pass to Jones against the Panthers, hurt his shoulder on a punt return and left against the Chiefs.

The keeper of the headsets. Coach Joe Judge said two of the timeouts New York wasted were the result of headsets that kept malfunctioning. He said it has happened in almost every game.

Devontae Booker. The backup running back is starting to play well with Barkley sidelined since hurting his ankle against Dallas on Oct. 10. Booker gained 60 yards rushing on 15 carries and caught a team-high five passes for 65 yards, including 41 yards on a little swing pass over the middle. He had 125 yards of New York's 300 yards.

Darius Slayton. With Golladay not playing for the third straight week, Sterling Shepard going down just before halftime with a quad injury and Kadarius Toney returning from an ankle injury, Slayton should have stepped up. He returned from a hamstring injury last week and had five catches for a team-high 63 yards against Carolina. He struggled Monday. He was on the field for 52 of the 56 offensive plays and had two targets and no catches.

In addition to Shepard, Toney hurt a thumb and returned. Golladay and Barkley are getting close to returning.

10 and 2 — The Giants had a season-high 10 penalties for 88 yards, including two horrible flags on the game-winning drive. The biggest was an offside call against linebacker Oshane Ximines that nullified an interception by Darnay Holmes at the Kansas City 34 with the game tied at 17 with 4:22 left in regulation. It came on a second-and-20 play. There was also a facemask call against linebacker Tae Crowder that turned a 14-yard pass to Travis Kelce into a 29-yard play to the Giants 47.

The Giants are home to face the Raiders and then finally get a chance to rest and get healthy.