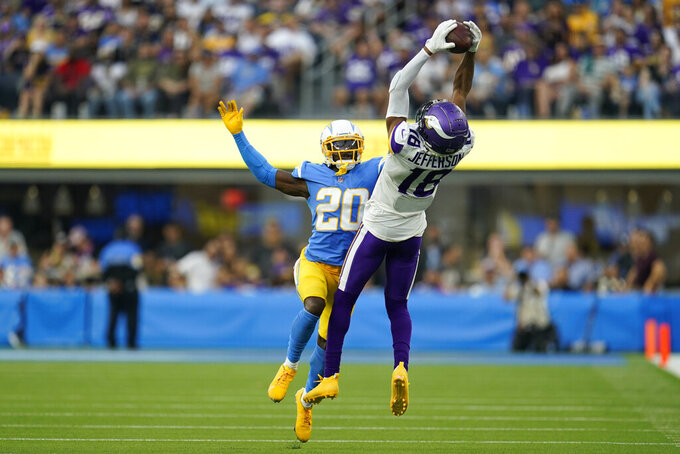 MINNEAPOLIS (AP) — With their window tightening for playoff contention, the Minnesota Vikings finally won a close game against a winning team by simply letting loose.

By going for it instead of settling for the safer options of kicking and throwing deep to their star wide receivers, the Vikings delivered a signature victory that just might portend a more aggressive approach on offense down the stretch.

Zimmer kept the offense on the field on fourth down twice Sunday. From the 1-yard line late in the third quarter, Kirk Cousins connected with tight end Tyler Conklin for their second touchdown of the afternoon and a 20-17 lead.

Then on fourth-and-2 from the Chargers 36, just before the 2-minute warning, Dalvin Cook went for 4 yards around the right edge on a toss sweep that allowed the Vikings to run out the clock.

“I thought both fourth down calls were great. They hit," Cousins said. “I think we needed both of them, too, to be able to win that game.”

The game-sealing run by Cook was preceded by an 18-yard completion to Adam Thielen, the kind of upfield push that was lacking the previous two games when the Vikings (4-5) wasted fourth-quarter leads and lost to both Dallas and Baltimore.

Cousins was especially productive when targeting Justin Jefferson, who had two acrobatic 27-yard receptions. Cousins spotted him in man-to-man coverage along the sideline in both situations — third-and-6 from their 29 on the final possession and second-and-7 from their 32 midway through the third quarter on the drive that ended in Conklin's fourth-down TD catch.

“Him just saying, ‘J.J. over there, let me go throw it up and him make a play.'” Jefferson said. “I like when he does that.”

The special teams units that failed the Vikings so frequently last year and made several noticeable mistakes in the first half of this season have turned it around.

Dede Westbrook had a 45-yard punt return Sunday, the second longest in the NFL this season. With 69 yards on three attempts, Westbrook matched Minnesota's punt return yardage total for the entire 2020 season. Greg Joseph is also 6 for 6 on field goals and 8 for 8 on extra points over the past three games.

Though the Vikings were effective when they sent extra pass rushers on Justin Herbert and rookie safety Camryn Bynum again played well in Harrison Smith's place, the secondary has been in a precarious position without cornerback Patrick Peterson for the past three games. Fellow starter Bashaud Breeland's combination of penalty yards committed and passing yards allowed also has been a problem.

Linebacker Eric Kendricks was an All-Pro in 2019 and played like it again last season before a calf injury cost him the last five games. But he has not missed a beat this year.

Kendricks, who is fifth in the NFL with 92 tackles, tied his career high with his fourth sack of the season Sunday and made a diving interception while in coverage on wide receiver Keenan Allen in the second quarter to set up a Vikings touchdown.

“I feel like I’ve elevated my game since I’ve been in this league, and I definitely want to keep stacking," Kendricks said. "I consider myself one of the best linebackers in this league and I’m just going to keep fighting, keep grinding, do what I do, and let the cream rise.”

RG Oli Udoh was flagged twice for holding, an infraction the Vikings have committed more than any other team in the league this year.

Udoh's eight penalties for 74 yards are the second most in each category by an offensive player in the NFL this season, according to Sportradar data, raising the question about whether fill-in center Mason Cole would take Udoh's place when center Garrett Bradbury returns.

“We’ll just try to figure this out. It’s better than having no options,” Zimmer said.

668 — Penalty yardage for the Vikings this season, the most by any team in the league.

With injuries and quarantines, the Vikings were down seven starters (five on defense) Sunday from the lineup they began training camp with.

They've been expecting Peterson (hamstring) to return this week. Smith and Bradbury have a chance to come back from COVID-19 protocol. Linebacker Anthony Barr (knee) is dealing with more of a wear-and-tear injury and could be return against Green Bay.

Aaron Rodgers and the Packers arrive this week at U.S. Bank Stadium, where the Vikings are only 5-9 in their past 14 regular-season games. Rodgers is 15-9-1 as the starter in his career against Minnesota, but Green Bay's defense will present Cousins plenty of challenges with the third-best average scoring allowance in the NFL.