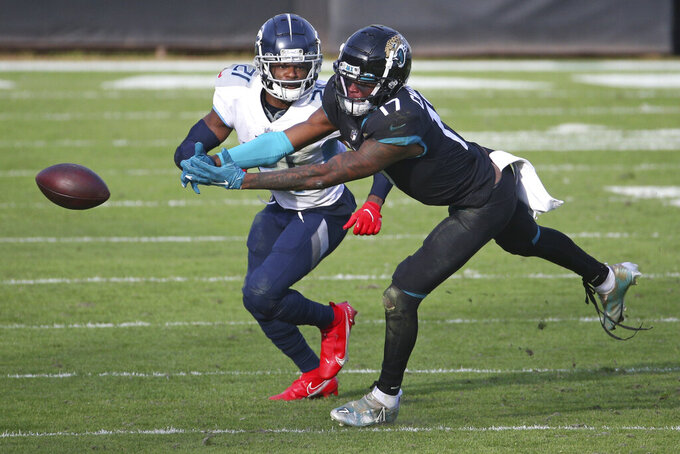 JACKSONVILLE, Fla. (AP) — Derrick Henry never asked to stay in the game. His Tennessee teammates made sure coach Mike Vrabel knew just how close the league's leading rusher was to another 200-yard day.

So Vrabel stuck with Henry, who delivered a 20-yard run in the fourth quarter that helped him make NFL history.

Henry ran for 215 yards and two touchdowns, his best performance in five trips to his hometown area, and the Titans dominated Jacksonville 31-10 on Sunday and handed the Jaguars a 12th consecutive loss.

It was Henry's fourth game with at least 200 yards and two scores on the ground, breaking an NFL record he previously held with Hall of Famers Jim Brown, Barry Sanders and LaDainian Tomlinson.

“I love my teammates," Henry said. "Appreciate them guys every day for what they do. The unselfishness that they have for me, it's really a blessing to have the teammates and the team that I have. Coach Vrabel is just trying to look out for me, just so I didn’t take any extra shots. My body feels good, so it’s about my teammates.”

Henry also topped the century mark for the ninth consecutive road game, leaving him one shy of the NFL mark set by Sanders over the 1996 and 1997 seasons.

Enjoying a big performance about 25 miles from his hometown of Yulee was something new for Henry. He hadn’t reached triple digits rushing in any of his four previous games in Jacksonville. He managed just 13 yards as a rookie in 2016, followed by outings of 92, 57 and 44 yards in front of friends and family.

He didn’t even need a full half to surpass all those outings Sunday against the Jaguars (1-12).

“I don't think we could get any more people up there," said Jacksonville coach Doug Marrone, who stacked the box early and often against Henry.

It didn't work. Henry had 170 yards on 17 carries in the first 30 minutes, including a 36-yard touchdown run. He added a 47-yard scamper early in the third as the AFC South-leading Titans (9-4) started to pull away.

Tennessee scored 17 points in less than four minutes spanning the second and third quarters. Following’s Henry’s first score, the Titans forced a punt and quickly moved into position for Stephen Gostkowski’s 53-yard field goal on the final play of the half.

Tennessee got the ball to start the third and piled on, with Ryan Tannehill finding tight end Geoff Swaim for a 5-yard score. It was Tannehill's second TD pass of the day. His first came on a flea flicker that ended with A.J. Brown's one-handed catch in the end zone.

But Henry ended up stealing the spotlight. His 1-yard plunge in the third put the Titans over 30 points for the fifth consecutive week, helped them clinch their fifth consecutive winning season and move a step closer to securing a playoff berth.

“We realize what Derrick brings to the table each and every game," Tannehill said. “He plays hard. He plays physical. When I turn around and I can see a crease, a 4-foot wide crease in the D-line, I know that’s going to be good for the Titans.”

The Jaguars benched quarterback Mike Glennon following his fourth turnover (plus a safety) in six quarters and turned to Gardner Minshew for the first time since Week 7. Minshew missed several weeks with a right thumb injury, but even after being deemed fully healthy, he remained on the bench behind Glennon.

Minshew immediately led Jacksonville to a touchdown, capping his first drive in nearly two months with a 5-yard throw to Keelan Cole. It was too little too late.

“It’s something that I really missed," Minshew said. “I missed the camaraderie with the guys. I missed being out there. As much as you’re always a part of the team, it’s just something different when you really are out there with the guys. It’s always special.”

Jaguars running back James Robinson became the first undrafted rookie in NFL history to top 1,000 yards in the first 14 weeks of a season. Robinson accomplished the feat with a 47-yard run early in the fourth quarter.

Titans: Linebacker Tuzar Skipper was ruled out with an elbow injury in the second half. Center Ben Jones hobbled off the field in the first half but later returned.

Jaguars: Safety Josh Jones left the field with a shoulder injury and was later ruled out.

Jaguars: Play at Baltimore next Sunday, facing defensive linemen Calais Campbell and Yannick Ngakoue for the first time since trading both in the offseason.