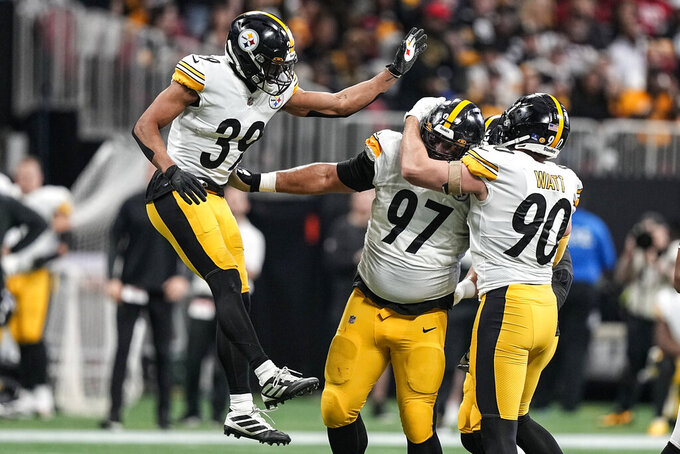 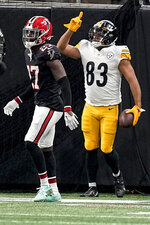 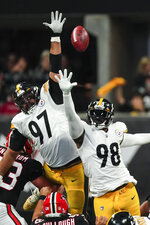 ATLANTA (AP) — Ironhead would've been proud of his boys.

After a morning trip to their father's grave, Cameron and Connor Heyward played an inspired role in Pittsburgh's first winning streak of the season.

Connor hauled in the first touchdown of the rookie tight end's NFL career, Cameron anchored a defense that allowed only a single touchdown, and the Steelers made it two victories in a row by holding off the Atlanta Falcons 19-16 Sunday.

It couldn't have come in a more appropriate place.

Their father, Craig “Ironhead” Heyward, was a bruising runner who spent three seasons with the Falcons in 1990s. After a bout with cancer, he died at the age of just 39 and is buried in suburban Atlanta.

His sons made sure to pay a visit before the game.

“This morning, we woke up early and went to my dad's grave,” Cameron Heyward said. “It kind of hit me when (Connor) scored. I was a complete mess. I don't like to be a soppy person, but it was one of those moments.”

Cameron, a 33-year-old defensive tackle, wasn't too shabby either.

He had the Steelers only sack, got another hit on Falcons quarterback Marcus Mariota and broke up a pass.

“My dad and God are always working together,” said Cameron, who donned his father's No. 34 Falcons jersey after the game.

Coming off a Monday night victory at Indianapolis, Kenny Pickett and the Steelers (5-7) finally put together a winning streak in what has been a tough rebuilding year in Pittsburgh.

Pickett's touchdown pass to Connor Heyward came midway through the second quarter after the youngster ran right between two defenders and wound up in the back of the end zone all by himself.

It was set up by a 57-yard completion to Pat Freiermiuth.

Pickett, also a rookie, turned in another solid performance. He completed 16 of 28 for 197 yards and has now gone four straight games without throwing an interception.

“To go out here and get back-to-back wins, feel the momentum a little bit, it feels great," Pickett said.

Atlanta, meanwhile, squandered a late opportunity near the goal line for the second week in a row.

After having a deflected pass picked off in the end zone at Washington, which preserved the Commanders' 19-13 victory, the Falcons (5-8) had first-and-goal from the Steelers 10 with another chance to pull out a victory with a touchdown.

But an obvious holding penalty on Parker Hesse wiped out Cordarrelle Patterson's apparent TD run around left end, a false start backed up the Falcons more, and they wound up settling for Younghoe Koo’s third field goal of the day from 28 yards with 5:27 remaining.

The Steelers ran off all but the final 42 seconds before Pressley Harvin pinned a punt at the Falcons' 2-yard line. In desperation mode with no timeouts remaining, Mariota's pass was picked off by Minkah Fitzpatrick to seal the victory and send a hefty contingent of towel-waving Steelers fans into a wild celebration that made Mercedes-Benz Stadium look like Pittsburgh South.

With a bye week upcoming, coach Arthur Smith hinted that changes are coming. Perhaps even at quarterback, where rookie Desmond Ridder has backed up Mariota all season.

“Every option's on the table,” Smith said.

Matthew Wright handled most of the scoring for the Steelers, connecting on field goals of 46, 46, 48 and 38 yards. The Steelers took a 19-6 lead into the final minute of the third quarter before the Falcons finally reached the end zone.

Tight end MyCole Pruitt hauled in a 7-yard touchdown pass from Mariota to cap an eight-play, 75-yard drive that made it 19-13.

The Falcons got the ball back and drove down the field again, converting on fourth-and-1 before Anthony Firkser hauled in a 15-yard pass for a first down at the 10.

But Hesse's penalty helped send the Falcons to another tough loss.

For the Steelers — and especially the Heyward brothers — it was a far different feeling.

“I talked to Connor as we were walking out out of the tunnel, and we said we were going to get the win for his Pops today," Pickett said. "It's not a coincidence. Everything happens for a reason.”

Pickett has now thrown 128 passes without an interception since his last pick against Philadelphia on Oct. 30.

The Steelers improved to 4-4 in the eight starts he's made since taking over the No. 1 job.

“Every week, I feel like I'm getting better and better,” he said.

The Falcons are still contention in the NFC South, where no team has a winning record.

But four losses in their last five games — by a total of 22 points — have put a real damper on their hopes.

“Sure, we've been close, but we've gotta evaluate everything,” Smith said. “We've got to get over hump, get back in the winning category. There's a lot that need to be evaluated, talked about and discussed.”

Steelers: CB Levi Wallace appeared to hurt an arm or hand when he ran into Fitzpatrick in the first half. SS Terrell Edmunds was injured on the first play of second half after tackling Patterson. RT Chukwuma Okorafor hobbled off the field in the third quarter with an undisclosed injury.

Falcons: LB Troy Anderson went down with an ankle injury.

Steelers: Return home next Sunday to face the Baltimore Ravens in an AFC North matchup.

Falcons: After the bye, travel to New Orleans to face the NFC South rival Saints on Dec. 18.