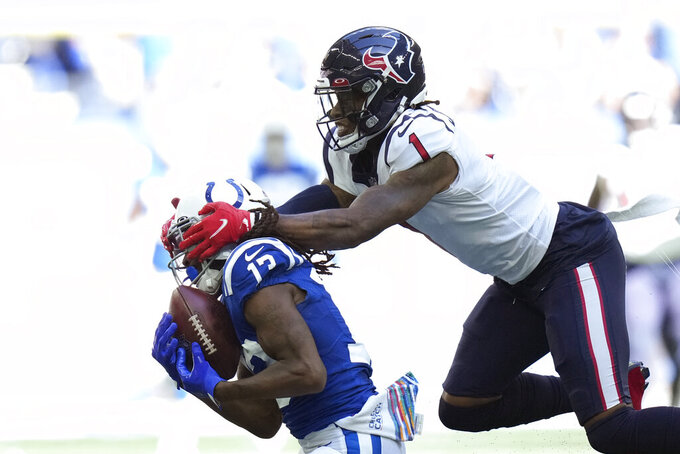 He talked about what he'd endured since undergoing neck surgery this summer; how he felt about missing this season's first five games; and why he'd contemplated retirement. Then he explained what it would mean to win his season debut Sunday against Houston.

Not surprisingly, Hilton delivered a gem. He caught Indy's first pass of the game, for a first down, set up a field goal with a 52-yard reception, and cherished every moment of the postgame celebration.

“I just spoke from the heart and a lot of guys felt that," he said after Indy's 31-3 victory. “I told them what I’ve been through, what I was going through. For me to come back, I just poured out my heart. They felt that and they played well."

Hilton played well, too, against an opponent he has routinely decimated. This time, he caught four passes for 80 yards before departing early with a quad injury, bringing his stats to 106 receptions, 1,883 and 11 TDs in 23 career games against the Texans.

But the impact Hilton made far exceeded his numbers.

Against what quarterback Carson Wentz described as a soft zone defense, Hilton's speed helped Indy open up the offense, and he and his teammates took full advantage of their opportunities.

When Parris Campbell got behind the Texans secondary, a rare sight for Indy through the first five games, Wentz tossed a perfect 51-yard lob for a TD. On the next series, Wentz saw Hilton break free over the middle and threw a pass Hilton ran underneath to set up the field goal that gave Indy a 10-0 lead.

There was seemingly nothing the Texans could do.

“A lot of those plays we gave up from a big-play standpoint was simply because we weren’t reading our keys," Houston coach David Culley said. “We weren’t where we needed to be on those particular plays."

Hilton made them pay for those mistakes. Clearly, the Colts are a different team when he is in the lineup.

At age 31, he still possesses enough breakaway speed to test defensive backs deep. Plus, in his 10th season, Hilton understands how to beat virtually any coverage — valuable intel he passes along to younger teammates.

Those are the intangibles coach Frank Reich and others often cite when talking about Hilton's locker room presence. And what they'd been missing during the first several weeks.

But since 2018, a string of injuries has kept Hilton on the bench more than he prefers with the most serious popping up after an awkward landing during training camp. As the pain lingered in August, Hilton opted for neck surgery.

When the pain lingered, he initially considered retiring. Eventually, though, the pain subsided and Hilton was able to come back.

He returned to practice this week, was cleared to play Saturday and after talking the talk during a team meeting, made an impact right from the start.

“I said with his speed, I’m just going to throw it to a spot and let him run underneath it,” Wentz said, describing the long pass play. “I’ve seen his speed on tape for a while, but to see him actually do it was good.”

Now, Hilton wants to prove he and the Colts can continue to play at this level as the season progresses. And he doesn't intend to let a sore muscle derail those plans anytime soon.

“I'll be all right," Hilton said when asked about the injured quad. “Just being back in the locker room with those guys makes it worth it. Just me being out there means a lot to me."