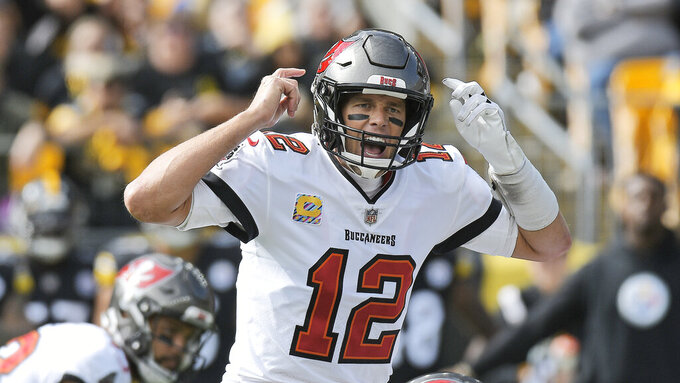 Tampa Bay Buccaneers quarterback Tom Brady (12) gives signals at the line of scrimmage during the first half of an NFL football game against the Pittsburgh Steelers in Pittsburgh, Sunday, Oct. 16, 2022. (AP Photo/Don Wright)

OPENING LINE: Buccaneers by 10 1/2, according to FanDuel Sportsbook.

TURNOVER DIFFERENTIAL: Buccaneers plus-3; Panthers minus-2.

BUCCANEERS PLAYER TO WATCH: The previous time a Tom Brady-led team had a .500 record this deep into a season was 2012. The seven-time Super Bowl winner is 4-0 against Carolina since joining the Bucs in 2020 with 10 TD passes and one interception. Tampa Bay outscored Carolina 150-63 in those games. He threw for four touchdowns and ran for one during a pair of victories over the Panthers last season.

PANTHERS PLAYER TO WATCH: P.J. Walker makes his second straight start at quarterback with Baker Mayfield and Sam Darnold both dealing with ankle injuries. Walker struggled last week, completing just 10 of 16 passes for 60 yards in a 24-10 loss to the Los Angeles Rams — and now he doesn't have his top weapon in Christian McCaffrey, who was traded to San Francisco on Thursday night. Walker's throws were almost exclusively screen passes as the Panthers stayed conservative to avoid turnovers. According to NFL Next Gen Stats, Walker’s average intended air yards was 0.1 yards — which means that the average depth of his throws was barely past the line of scrimmage.

KEY MATCHUP: Panthers RBs Chuba Hubbard and D'Onta Foreman vs. Bucs run defense: The trade of McCaffrey, the Panthers' best offensive player, leaves a major hole in the backfield. Hubbard and Foreman are expected to carry the load. They'll face a Tampa Bay defense that is 14th in the league against the run. Hubbard filled in for McCaffrey last season and ran for 612 yards and five touchdowns, but only averaged 3.6 yards per carry. Foreman ran for 566 yards and three TDs last season for the Tennessee Titans, averaging 4.3 yards per carry.

KEY INJURIES: Bucs S Logan Ryan (foot) is out after being placed on injured reserve. Veteran TE Kyle Rudolph could get more playing time with TE Cameron Brate (neck) sidelined. The status of WR Julio Jones (knee), CB Sean Murphy-Bunting (quad), S Mike Edwards (elbow) and DT Akiem Hicks (foot) will be evaluated as the week progresses. ... Panthers CB C.J. Henderson and Donte Jackson (concussion) are expected to play and Jaycee Horn (ribs) is likely to return this week leaving the Panthers at full strength at that position. ... OLB Frankie Luvu (shoulder) is expected to return this week, too.

SERIES NOTES: The Bucs have won six of the past seven against the Panthers.

STATS AND STUFF: The Bucs are averaging 20.2 points through six games, down from just over 30 per game in 2021, when they were the NFL’s second-highest scoring team. They’ve been held to 21 points or fewer in five of six games. ... Brady hasn’t thrown an interception since Week 1 at Dallas. ... RB Leonard Fournette is a big part of Tampa Bay’s passing game. He has 32 receptions, third in the league among running backs behind Austin Ekeler (41) and McCaffrey (33). Fournette has at least five catches and a TD receiving in three straight games. ... The Bucs are third in the league with 21 sacks. A league-high 11 different defenders have at least one. ... The Panthers have lost 12 of their past 13 games overall and nine of their past 10 at home. ... Walker is 2-1 as an NFL starter despite eight interceptions and two TD passes. ... The Panthers are last in the league in third down offense, converting just 23.6% of their opportunities, and are also 32nd in time of possession. ... Carolina's defense has scored three touchdowns. ... Carolina DT Derrick Brown had a career day vs. the Rams, racking up a career-high seven tackles while combining for a sack. Brown is 12th leaguewide among defensive linemen with 24 tackles.

FANTASY TIP: Bucs WR Chris Godwin has 35 receptions and is averaging 17.5 yards per catch and 87.3 yards per game in seven outings vs. the Panthers. Brady targeted him a team-high 12 times in last week’s loss at Pittsburgh, with Godwin finishing with six receptions for 95 yards but no TDs.