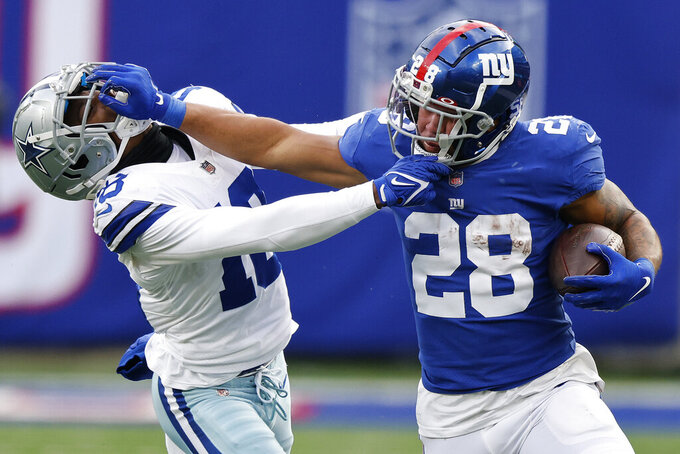 Jalen Hurts had little time to appreciate a stellar performance before shifting his focus to the next game.

Hurts returned from an ankle injury to lead the Philadelphia Eagles to a 27-17 victory over Washington on Tuesday night in a game that was pushed back two days due for COVID-19 issues.

After going 20 for 26 for 296 yards with one touchdown pass and two TDs rushes, Hurts and his teammates already had their minds on facing the New York Giants (4-10) on Sunday. Hurts had the worst game of his two-year career against the Giants in a 13-7 loss in Week 12. He threw three interceptions and injured his ankle in that one.

“I flushed that a long time ago. I forgot about it,” Hurts said. “I get to play them this week.”

The Eagles (7-7) have won five of seven after opening the season losing five of season. They’re in a three-way tie with Minnesota and New Orleans for the third wild-card spot in the NFC.

Philadelphia may be without coach Nick Sirianni after he tested positive for COVID-19 on Wednesday. If Sirianni doesn’t clear protocols, passing game coordinator Kevin Patullo would be in charge on the sideline and offensive coordinator Shane Steichen would call plays.

“The reason that I went with Kevin there ... is because Kevin doesn’t have a position to coach,” Sirianni said. “Kevin helps with a lot of different aspects throughout the game. I want there to be as little change as possible. ... So, Kevin is involved in all those conversations of coin toss and going for it on fourth down, as it is anyway. So, it’s just a natural transition there for Kevin to be able to do that.”

Giants defensive coordinator Pat Graham’s unit had one of its best games of the season against the Eagles on Nov. 28.

While Philadelphia ran for 208 yards, Hurts struggled. He was 14 of 31 for 129 yards with a career-high three picks. His longest pass was 21 yards. Devonta Smith had two catches for 22 yards and Jalen Reagor didn’t help things by dropping a potential TD pass in the closing seconds. Defensive backs Xavier McKinney and Darnay Holmes and inside linebacker Tae Crowder had the interceptions.

“I always think it’s a mistake when you play someone for the second time, assuming they’re the same team or you’re the same team,” Giants coach Joe Judge said. “Both teams have had some change in recent weeks.”

The Eagles are the first NFL team with 175-plus yards rushing in seven consecutive games since the 1985 Chicago Bears.

Philadelphia’s five games with 200-plus yards rushing this season are tied for third most in team history. Miles Sanders had a career-best 131 yards rushing against Washington and became the first Eagles player with consecutive 100-yard games since LeSean McCoy in 2014.

“That is a credit to the offensive line and they are making it very easy for the running backs to run behind them,” Sanders said.

Giants punter Riley Dixon has struggled in recent weeks. It started with the game against the Eagles.

He had five punts and averaged 39.2 yards with a net of 35.6. With the Giants clinging to a six-point lead with 1:19 to play, he had a 39-yard punt to the Eagles 32 that Reagor returned 9 yards to the 41, giving Philadelphia great field position to try to pull a win.

While he had two punts downed at the 11-yard line the following week against Miami, Dixon also had a touchback on a punt from Miami’s 46. For the game, he had a net of 36.8 yards.

The following week against the Chargers, he had a touchback on a punt from midfield on the opening series. He improved last week, recording an excellent net of 50.5 yards on two punts against the Cowboys. Dixon needs to improve with the Giants struggling on offense and relying almost exclusively on their defense.

Eagles six-time Pro Bowl defensive tackle Fletcher Cox lined up at end a few times against Washington and had his second sack of the season. Cox’s production has dipped this season while adjusting to defensive coordinator Jonathan Gannon’s system.

“Obviously, it’s a lot different for me,” Cox said of being an edge rusher. “It’s a lot of space. I just try to take advantage of every opportunity I get. We saw an opportunity and I told (Gannon) to go back to it again. We did and it was good for us.”