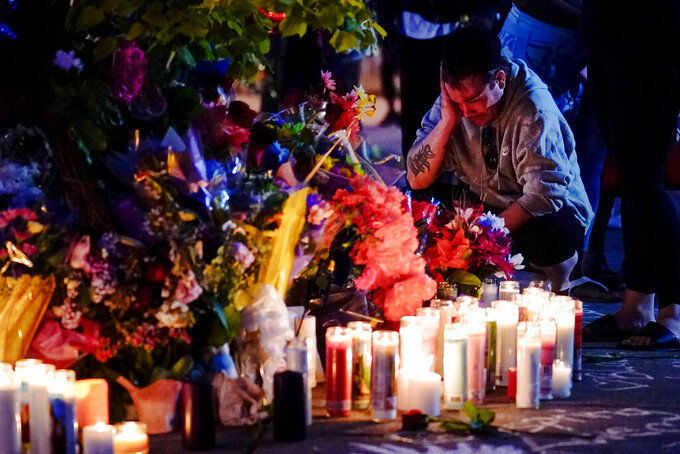 A person pays his respects outside the scene of a shooting at a supermarket, in Buffalo, N.Y., Sunday, May 15, 2022. (AP Photo/Matt Rourke)

The Bills safety knew he and his teammates could try to help the families of the victims and a stunned community.

A white, 18-year-old gunman in military gear and livestreaming with a helmet camera opened fire Saturday afternoon at Tops Friendly Market, killing 10 people and wounding three others. Most of the victims were Black.

“I still can’t believe it,” Hyde said before his softball event Sunday at Sahlen Field in downtown Buffalo. “But when there’s hate in the world, you kind of erase it with love, and coming out here today and showing the community love and love to the youth, love to the community, love to the foundation. I guess that’s the way to combat it.”

Hyde, whose IMagINe For Youth foundation received $200,000 from the event’s sponsors, committed to donating a portion of the proceeds from the game to the families of the victims. Money from a silent auction at the game will also go to victims’ families.

“If we stopped and canceled everything because of hate," Hyde said, “we wouldn’t move forward.”

A few dozen of Hyde's Bills teammates were also at the softball game, including quarterback Josh Allen and cornerback Tre’Davious White. Allen said the Bills, who have voluntary organized team activities this week, will meet Monday to determine how they can help the families of the victims.

“I was sick to my stomach all day yesterday,” Allen said in a video posted by the Bills. "I was flying back from my sister’s graduation, and it was just, it’s gut wrenching. It really is. ... We’ll talk as a team and kind of figure out what we want to do, but there’s no doubt that we’re going to do something.”