Indy's Taylor could be in for big game at terrible Texans 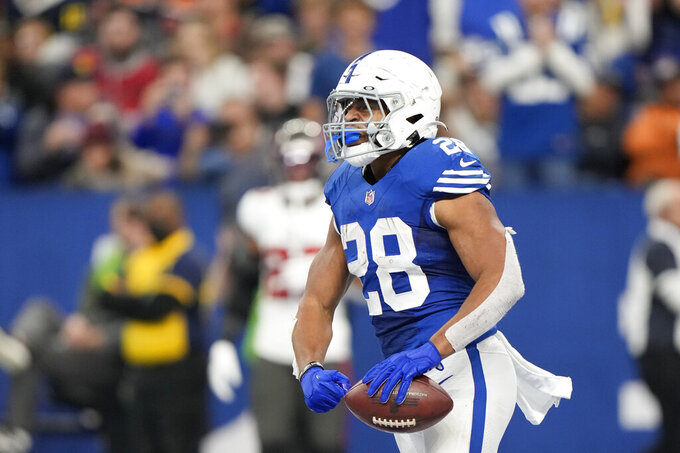 Indianapolis Colts' Jonathan Taylor reacts after a touchdown run during the second half of an NFL football game against the Tampa Bay Buccaneers, Sunday, Nov. 28, 2021, in Indianapolis. (AP Photo/AJ Mast)

HOUSTON (AP) — Jonathan Taylor didn’t have a great game for the Indianapolis Colts last week and still finished with 83 yards rushing and a touchdown.

On Sunday, the NFL’s leading rusher will have a great chance to bounce back when he faces the Houston Texans (2-9), who have one of the worst run defenses in the NFL.

Taylor is the league’s only 1,000-yard rusher this season with 1,204 yards and his 14 TD runs also top the NFL. He is tied with Nick Chubb for the highest per carry average (5.8) among players with more than 10 rushes and has a league-high 10 rushes for 20 or more yards.

Taylor has six 100-yard rushing games this year, highlighted by a season-best 185 yards and four touchdowns in a win over Buffalo two weeks ago for the Colts (6-6).

The Texans rank 31st in the NFL by allowing 135.6 yards rushing a game and Taylor ran for 145 yards and two scores to lead the Colts to a 31-3 win over them earlier this season.

“He has everything you’re looking for in a great running back when you have a commitment to the running game like they do,” Houston defensive coordinator Lovie Smith said.

“He has size, he has great vision in the hole, he can run in between the tackles, he’s as fast as anybody on the field. It’s a big challenge. We have to be ... gap sound. It’s about pursuing, getting as many guys to the ball as possible when you play a guy like him.”

Limiting Taylor has been a key to stopping the Colts this season as they’ve won each game where he’s eclipsed the 100-yard mark and lost every game where he didn’t.

Tampa Bay beat the Colts 38-31 last week in part by forcing them to throw the ball. This time, the Colts are hoping to find better balance.

“I felt like we opened up our offense because they stacked the box and we had to get them out of that,” quarterback Carson Wentz said.

After playing 12 games and an eagerly anticipated bye week looming after Sunday’s game, the AFC playoff picture is taking shape.

And while the Colts remain in the playoff hunt, if the season ended today, they’d be left out. But with five games left, a strong finish could get them into the playoffs for the second straight season and the third time in coach Frank Reich’s four-year tenure.

For now, though, the Colts are simplifying their focus.

“There’s definitely a small, small window of error and the guys know that,” 2020 All-Pro defensive tackle DeForest Buckner said. “All we can do is focus on today. So, to get to the playoffs, we have to get through the Texans first.”

Indianapolis receiver T.Y. Hilton has been dominant against the Texans over the years. The veteran has 1,798 yards and 11 touchdowns in 19 games against Houston and the Colts have won 13 of those games.

The four-time Pro Bowler resurfaced as a key option for Wentz last week and, presuming he's healthy, could be in for a big game Sunday. Hilton had four catches for a season-best 80 yards in his first matchup with the Texans this season.

BACK TO THE OFFICE

The Texans returned to their facility Thursday after practice and all other in-person activities were canceled Wednesday on the advice of their medical team because some players weren’t feeling well.

The Texans didn’t have any positive COVID-19 tests, and everything was back to normal Thursday.

No team has been better at producing — or capitalizing — off turnovers this season than the Colts.

They lead the league with 27 takeaways, a plus-12 turnover differential and 105 points off those turnovers.

But this week, the Colts are focused on limiting their own miscues after giving up 24 points off five giveaways in last week’s loss.

Coach David Culley wouldn’t say exactly what Reid did, but made it clear that no one on the team is above punishment if they don’t follow the team’s guidelines.

Culley said there wasn’t a big talk when they told Reid he would return this week.

“We just said: ‘we’re back to business as usual, we’re ready to go,’” Culley said. “He served his time and we’re moving on.”