Influence of Bills’ Edmunds growing on and off the field 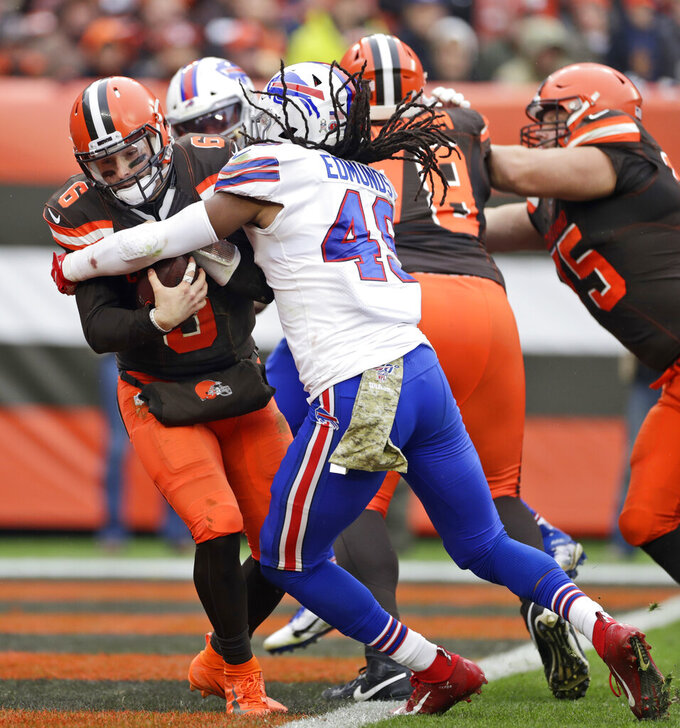 Cleveland Browns quarterback Baker Mayfield (6) is stopped by Buffalo Bills middle linebacker Tremaine Edmunds (49) for a safety during the second half of an NFL football game, Sunday, Nov. 10, 2019, in Cleveland. (AP Photo/Ron Schwane)

ORCHARD PARK, N.Y. (AP) — Deep into his second season in the NFL, Tremaine Edmunds is finding his voice — and his game — for the Buffalo Bills.

The usually reserved 2018 first-round pick was praised for making an impassioned team speech before carrying it over to a dominating performance in a 37-20 win over the Miami Dolphins on Sunday. Edmunds was all over the field for Buffalo, making a season-high 12 tackles in an eye-opening performance.

Call it the next step for one of Buffalo’s key building blocks.

“We’re seeing the evolution of his growth,” Bills defensive coordinator Leslie Frazier said. “It’s tremendous for all of us to witness, both on the field and off the field. For him to stand up in front of his peers on Saturday night and to be as transparent as he was ... but also just sharing some of his flaws and some things he wants to improve on. That’s not an easy thing to do, to be so real and genuine. ... Hat goes off to him, that’s a leader.”

It hasn’t always been smooth sailing for the young linebacker. Chosen 16th overall last spring, Edmunds was thrust into a major role as a rookie and endured growing pains as one of the youngest players in the league. He overcame those initial struggles and excelled in the final month of the season, showing the traits that made him a high draft pick.

With the Bills coming off a demoralizing 19-16 loss to the Cleveland Browns and struggling against the run, changes were needed. Edmunds took it upon himself to address the entire team on Saturday night, taking charge in an effort to motivate his teammates.

“It’s great to see him really start to take ownership of it,” linebacker Lorenzo Alexander said. “For him to recognize that this was the moment to speak up just shows the leaps and bounds that he’s made from being a vocal leader standpoint for this team because it means a lot. Because when he speaks, guys kind of sit up a little bit because it means something, it carries some weight.”

The Bills also made changes in Edmunds’ role on the field. Edmunds, Alexander and Matt Milano became focal points in a blitz-heavy game plan, forcing frequent stops for losses and incompletions.

After a stop in the backfield by Alexander on the Dolphins’ first play from scrimmage, Edmunds slid to his right and burst through an opening to stuff running back Kalen Ballage for no gain. On the first play of Miami’s next drive, Edmunds’ sudden pressure on center Daniel Kilgore allowed for defensive tackle Ed Oliver to go untouched and sack Ryan Fitzpatrick.

Edmunds helped force a key incompletion on third-and-9 late in the first half on an all-out blitz. He and Milano combined for a sack in the third quarter, and Edmunds set up an easy sack for defensive tackle Star Lotulelei on another blitz.

As the Bills (7-3) look to make a playoff push, they’ll continue to lean more on Edmunds and quarterback Josh Allen, their first-round picks from one year ago. It’s a responsibility that Edmunds both cherishes and embraces.

And he’s eager for more.

“I feel like a lot of my instincts are starting to kick in a whole lot more,” Edmunds said. “But you know, to be honest with you, I still feel like I can improve a whole, whole lot. And that’s the thing that I’m most proud about, that’s what keeps me going because I know right now is just nothing. I’m not even close to how I know I can play. That’s what I’m most excited about.”