Ingram racks up stats, shows leadership as 'heart' of Ravens 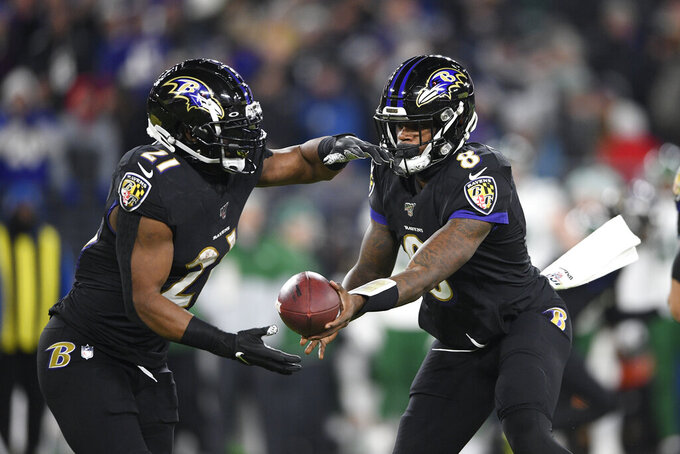 File-This Dec. 12, 2019, file photo shows Baltimore Ravens quarterback Lamar Jackson (8) handing off to running back Mark Ingram (21) during the first half of an NFL football game against the New York Jets in Baltimore. As he draws closer to a milestone birthday, Ingram wants everyone to know he's still got what it takes to score a bunch of touchdowns, rush for 1,000 yards and earn an invite to the Pro Bowl. “I feel like people say when you're 30 you're dead,” Ingram said Wednesday. “I turn 30 at the end of this week, but my best football is ahead of me." (AP Photo/Nick Wass, File)

OWINGS MILLS, Md. (AP) — As he draws closer to a milestone birthday, Ravens running back Mark Ingram wants everyone to know he's still got what it takes to score a bunch of touchdowns, rush for 1,000 yards and earn an invite to the Pro Bowl.

“I feel like people say when you're 30 you're dead,” Ingram said Wednesday. “I turn 30 at the end of this week, but my best football is ahead of me."

Though quarterback Lamar Jackson has received much of the credit for Baltimore's success this season, Ingram has played a huge part in the 10-game winning streak that has the Ravens (12-2) on the brink of clinching the No. 1 seed in the AFC playoffs. In addition to scoring 14 touchdowns, accounting for 64 first downs and accumulating 1,174 yards from scrimmage, Ingram is the unquestioned leader in the locker room.

“He's the heart of the team," Jackson declared. “He brings the groove, the excitement."

Ingram won the Heisman Trophy at Alabama in 2009, was drafted in the first round by New Orleans in 2011 and played for the Saints through last season. He ran for 645 yards in 2018, but after losing the starting job to Alvin Kamara, Ingram decided a change of scenery was in order and signed with Baltimore as a free agent in March.

The transaction has benefited both sides. Baltimore added a bruising runner with leadership qualities to an offense built around rushing the ball, and Ingram found the perfect place to prove there's plenty of bounce left in a pair of legs that turn 30 on Saturday.

“I thank the Lord for bringing me here," said Ingram, who earned his third career Pro Bowl bid on Tuesday night.

It is a well-deserved honor, given that Ingram is averaging a healthy 5 yards per carry and is only 37 yards shy of reaching 1,000 for the third time in his career.

'"He's everything we hoped for," coach John Harbaugh said. “I didn't know how boisterous he was and outgoing he was, so to see that has been fun. He really gets it. He knows how to treat people, he knows how to practice and bolsters everything we're trying to do."

The Ravens can earn the No. 1 seed in the AFC by defeating Cleveland on Sunday. It's a rematch of a Sept. 29 game in which Ingram ran for 71 yards in a 40-25 defeat. That's the last time Baltimore lost a game, and the Browns know they're going to have to stop Ingram in the rematch.

“Mark really runs hard, he runs physical, he's hard to tackle," Browns coach Freddie Kitchens said. “He has all the attributes of a great running back.”

That's the reputation that Ingram brought with his to Baltimore, yet sometimes perception is not the same as reality.

“I'm not going to lie to to you man, I thought he was a 6-foot-2 running back," Ravens offensive tackle Orlando Brown Jr. said. “I didn't know he was 5-10 (actually 5-9). I thought he was a lot bigger than he is, but he's got a really big personality."

After the Ravens got rid of veterans Joe Flacco, Terrell Suggs and Eric Weddle during the offseason, there was some question about whom would fill the void in the locker room. Ingram stepped in, only because leadership comes to him as naturally as lowering his shoulder into an oncoming linebacker.

“I didn't really sense that I needed to be some crazy leader or anything. I just try to be myself," he said.

Whether he's yelling in the locker room, cheering from the sideline or leading the charge to get Jackson selected as NFL MVP, Ingram is indeed the “heart of the team."'

“That means the most to me, when my quarterback and my teammates say that,“ Ingram said.

“He came in and became a great leader from Day 1," Brown said of Ingram. “He's somebody that as a young player I look up to. He's brought a lot of energy in here. He shows up every day, works hard, and he's going to give it all he's got on Sundays."