Jags working to fix 2nd-half flops after another blown lead 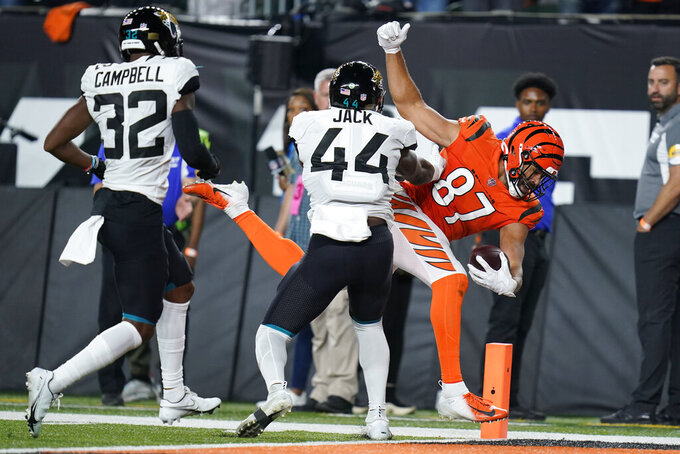 Cincinnati Bengals' C.J. Uzomah (87) goes in for a touchdown against Jacksonville Jaguars' Myles Jack (44) and Tyson Campbell (32) during the second half of an NFL football game, Thursday, Sept. 30, 2021, in Cincinnati. (AP Photo/Michael Conroy)

The skidding Jaguars (0-4), who have dropped 19 consecutive games, have been outscored a combined 61-19 in the second half of their last three outings. It’s a troubling trend for Meyer, who said Friday he’s confident it’s not a conditioning issue.

“It seems like the first part of the second half is when we’ve had a couple issues,” Meyer said.

Jacksonville led 14-0 at intermission at Cincinnati on Thursday night before losing 24-21 thanks to Joe Burrow’s game-winning drive. The Bengals scored on all four second-half possessions, getting three touchdowns and then the go-ahead field goal on the final play.

Four days earlier, the Jaguars led Arizona 13-7 at the break before being outscored 24-6 the rest of the way. The Cardinals put together scoring drives of 68, 75 and 65 yards in the second half.

Denver had similar second-half success on Sept. 19, opening the third quarter with a 75-yard TD drive that gave the Broncos a double-digit lead.

The Jags played well defensively in the first half of each of those games. But they hardly looked the same down the stretch.

“We were one or two plays away. The whole locker room knows it,” defensive tackle Malcom Brown said. “We’ve felt that way every game, so that’s the sad part of it.”

The Jaguars are starting to develop an offensive identity, one that begins with running back James Robinson and includes “Trevor being Trevor.”

Robinson has 166 yards rushing and three touchdowns the last two games, looking much like he did as a rookie in 2020. Jacksonville’s offense will run through him as long as rookie quarterback Trevor Lawrence is still learning the nuances of playing in the NFL.

Lawrence, though, appears more comfortable every week. Meyer wants Lawrence to keep using his legs, and offensive coordinator Darrell Bevell seems to be listening. Lawrence ran eight times for 36 yards and a touchdown against the Bengals, including several option plays.

Bevell had been reluctant to call Lawrence’s number too often, saying “we’re really not trying to make him a runner” and adding “this is not Clemson where we are pulling the ball and running downhill inside and letting linebackers and safeties hit him.”

But Lawrence’s legs have kept defenses off-balance the past two games and given Jacksonville a chance. He ran six times for 27 yards last week against Arizona.

Jacksonville has one sack in its last two games and continues to drop its best pass rusher, linebacker Josh Allen, into coverage. It’s a head-scratching move at best, coaching incompetence at worst.

Allen had 10½ sacks and made the Pro Bowl as a rookie in 2019. No doubt, he benefited from playing alongside Calais Campbell and Yannick Ngakoue that year. With Jacksonville switching to a 3-4 scheme, Allen was prepared to be used in coverage some this season. But no one expected it to be this often.

Newly acquired tight end Dan Arnold caught two passes for 29 yards, including a 17-yarder that set up Jacksonville’s first touchdown of the night.

The Jaguars traded troubled cornerback CJ Henderson, the ninth overall pick in the 2020 draft, to Carolina on Monday for Arnold. The deal also included a swap of picks in 2022.

It’s still early, but Arnold has the potential to be Jacksonville’s best pass-catching tight end in years. If so, a trade in which Jacksonville looked like it got fleeced might not be as lopsided as it initially seemed.

Backup running back Carlos Hyde’s shoulder “didn’t feel right” when he arrived at the stadium Thursday and was held out as a precaution, Meyer said. Hyde hadn’t been on the injury report at all during the week, making his last-minute injury curious.

The Jaguars might be better off anyway with receivers Jamal Agnew, Tavon Austin and Laviska Shenault serving as change-of-pace backs behind Robinson. All three are faster than Hyde and have a chance to provide an element Jacksonville’s offense has been missing since rookie running back Travis Etienne had season-ending foot surgery early last month.

Receiver DJ Chark broke his left ankle on the third play of the game and likely will miss the rest of the season. It’s the latest and most significant setback for Chark, who missed nine games his first three seasons and is in the final year of his rookie contract. Chark, who made the Pro Bowl in 2019, has seven catches for 154 yards and two touchdowns this season. … Right guard A.J. Cann has a knee injury that will sideline him several games, maybe longer.

383 — days since Jacksonville’s last victory. The Jaguars opened the 2020 season with a home win against Indianapolis and have dropped every one since.

The Jaguars get an extended break before hosting Tennessee on Oct. 10. The Titans have won seven of the last eight meetings, scoring 31, 33 and 42 points in the past three.