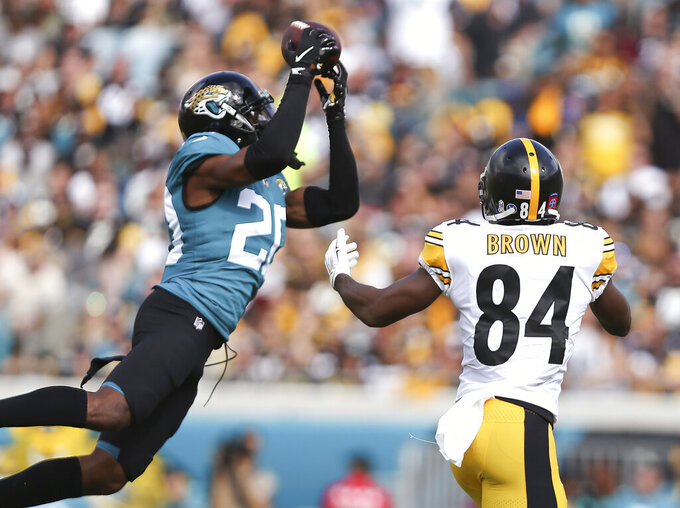 FILE - In this Nov. 18, 2018, file photo, Jacksonville Jaguars cornerback Jalen Ramsey, left, intercepts a pass in front of Pittsburgh Steelers wide receiver Antonio Brown (84) during the first half of an NFL football game in Jacksonville, Fla. Ramsey responded to Tom Coughlin’s public criticism Friday, April 19, saying the team knows why he’s skipping voluntary workouts. Ramsey did not elaborate on the reason for his absence in his Twitter post, but said he will be “ready when it’s time.” (AP Photo/Gary McCullough, File)

Marrone said Monday he finally spoke to star cornerback Jalen Ramsey, who is skipping voluntary workouts to stay closer to home, and seemingly cleared the air. Marrone said last week that he reached out to Ramsey and didn't get a response.

As it turned out, Marrone had the wrong number for the two-time Pro Bowl defender.

It was the latest twist in a weeklong saga that included public shots from Tom Coughlin , Ramsey's agent and the NFL Players Association.

"Had a great talk," Marrone said. "He's training with his brother. He's in Nashville. He's spending time with his family. He said he's going to come back in the best shape he's ever been in and he's all fired up. That was pretty much the conversation. It was a good conversation. I was concerned, obviously, because I was texting a number I thought was his and he wasn't getting back to me.

"I couldn't figure out what was going on, so we kind of had a little laugh about it. Now I have the right number. He's always had my number, so it's good."

Marrone said he and retired NFL tight end Marcus Pollard, the team's director of player development, both had the wrong number for Ramsey and didn't realize it until after Coughlin ripped Ramsey and linebacker Telvin Smith for their absences. Marrone also said Ramsey had been in contact with his position coach, Tim Walton.

Coughlin, the team's executive vice president of football operations, criticized Ramsey and Smith during the team's state of the franchise presentation Thursday. He said "championship teams are dominated by selfless individuals who recognize that the welfare of the team must always be paramount to any other consideration."

"Success in the NFL demands struggle," Coughlin added. "Those who have everything given to them become lazy, selfish and insensitive to the real values of team. The hard work that many try to avoid is the major building block for the development of an outstanding football team.

"It's not about rights and privileges. It's about obligations and responsibility. And the question is, can we count on you? Doing things the right way all the time, we are what we repeatedly do. Excellence therefore is not an act, but a habit."

Ramsey and his agent, David Mulugheta, responded on social media the following day.

Coughlin backed down a bit Monday.

"There's really no need to speak any further on that one," he said. "That was an open statement about my beliefs about what the offseason programs are about. That's enough. You're not going to get me to answer any more on that one."

Ramsey and Smith are the team's only players who didn't show up for the start of the team's offseason program. Marrone said Monday he still hasn't heard back from Smith, adding "he's probably busy."

Marrone made it clear he views the workouts as voluntary.

"I try to keep reminding myself that, and we appreciate the players that are here," Marrone said. "That's what you have to do. If you treat them like they should be here, then that gets tough. The NFLPA collectively bargained that it's a volunteer period, and those players have an option. And the ones that are here we appreciate and we're working with them, trying to get them better."