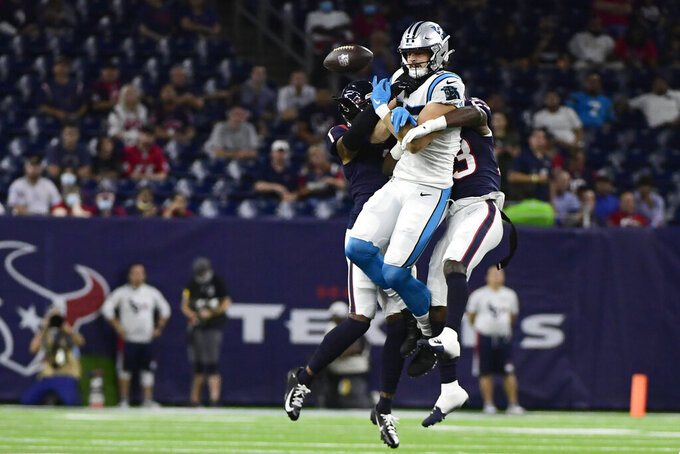 JACKSONVILLE, Fla. (AP) — Cornerback CJ Henderson is the latest first-round draft pick to get shipped out of Jacksonville.

The winless Jaguars traded the ninth overall selection in 2020 to the undefeated Carolina Panthers in exchange for journeyman tight end Dan Arnold on Monday. The deal also includes a swap of draft picks, with Jacksonville getting Carolina's third-rounder in 2022 and the Panthers receiving a fifth-rounder from the Jaguars.

“We have to improve a lot of areas of our teams, and just seemed like it might be a good, fresh start for CJ," Jaguars coach Urban Meyer said, adding that Carolina was aggressive in trying to make the deal. "I love CJ. Spent a lot of time with him and his parents. I think it’s going to be good for both of us.”

Trading Henderson fills a huge need for Carolina (3-0) and unloads a headache for the Jaguars (0-3), who first started shopping the cornerback over the summer.

Panthers first-round pick Jaycee Horn broke a bone in his right foot against Houston on Thursday night and could miss the rest of the season. Henderson, meanwhile, kept missing practices and games and seemingly had little interest in becoming a better fit in Jacksonville.

Carolina coach Matt Rhule isn't sure whether Henderson (groin) will be healthy enough to play Sunday against Dallas.

“This isn’t about, ’Hey, there’s a problem (at cornerback).’ This is just a really talented player that we held in really high regard and he was available,” Rhule said. “This isn’t like a right now, this week type of conversation. This is the about the next two or three years."

Former Jaguars general manager Dave Caldwell drafted Henderson with the belief the former Florida standout would replace Jalen Ramsey, the fifth overall pick in 2016 who wanted out of Jacksonville and essentially forced a trade to the Los Angeles Rams in 2019.

Henderson’s NFL debut was impressive. He had five tackles and three pass breakups, including an interception and a fourth-down swat in the final minute that sealed Jacksonville’s lone victory last season. Henderson looked like a budding star, but that notion quickly turned into a blip.

He injured a shoulder three weeks later and hasn't been the same since. He struggled physically — and mentally — to deal with the setback and then landed on injured reserve in mid-November because of a strained groin. He missed half the year and needed labrum surgery in the offseason.

His state of mind was a topic of discussion again during training camp. Henderson tested positive for COVID-19 when he reported to camp in July and sat out 10 days. He returned briefly before missing a scrimmage for “personal reasons.” Meyer and assistant head coach Charlie Strong went to Henderson's apartment for “a conversation."

“Any time you have a great young man like that, you want to make sure that you do everything possible to help him and to help him get back on track,” Strong said.

Tre Herndon's sprained knee ligament helped Henderson regain his starting spot, but Henderson's play in the first two games was average at best. He injured a groin muscle last week and was inactive in a 31-19 loss to Arizona on Sunday.

“As a teammate, as a friend, it's tough," Jaguars cornerback Shaquill Griffin said. "I think we all know business is business. Definitely always rooting for him and a guy I'll continue to check up on. The relationship goes way beyond football."

Jacksonville clearly had concerns about Henderson's long-term future with the franchise months ago. The team gave Griffin a three-year, $40 million deal in free agency, re-signed Herndon and drafted Georgia cornerback Tyson Campbell with the first pick in the second round.

Not only had Henderson missed eight games as a rookie, he raised eyebrows by going on a late-night Twitter rant from a McDonald’s early during 2020 training camp. He missed a few practices afterward because of an “illness” and didn’t speak to the media until his performance in last season's opener.

He’s hasn’t been made available since, either, and the Jaguars said the NFL recently gave them permission to keep him off limits.

Now, he gets a fresh start in Carolina.