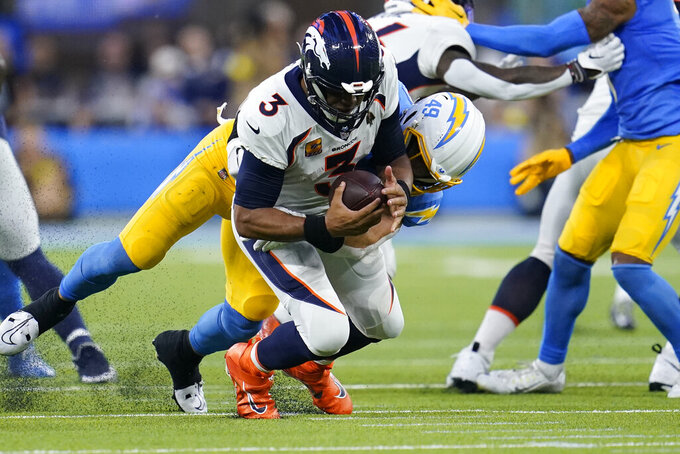 OPENING LINE: Broncos by 1½, according to FanDuel Sportsbook.

TURNOVER DIFFERENTIAL: Jets plus-1, Broncos even.

JETS PLAYER TO WATCH: RB Breece Hall. The rookie second-rounder continues to establish himself as a key playmaker in New York’s offense. He’s coming off rushing for a career-best 116 yards at Green Bay, but will face a tough test in Denver’s defense. Hall leads the Jets with 391 yards rushing and three TDs on 76 attempts. He also is tied for third on the team with 19 receptions.

BRONCOS PLAYER TO WATCH: RB Melvin Gordon. He was benched early in the loss to the Chargers on Monday night after carrying three times for 8 yards and he seemed disengaged on the sideline as Latavius Murray averaged 4.4 yards a carry in his Denver debut. A day later, Gordon retweeted a bunch of suggestions that the Broncos trade him. But coach Nathaniel Hackett and Gordon met to clear things and Hackett declared Gordon his starter against the Jets.

KEY INJURIES: Jets rookie DE Jermaine Johnson (ankle) didn’t practice all week and coach Robert Saleh said he would miss a second straight game. ... Broncos QB Russell Wilson is dealing with a pulled hamstring, his second injury in two weeks. He also had an injection recently to relieve discomfort near his throwing shoulder. Wilson said he hopes to play, but he was limping after the game Monday night and was carted to the team bus. He was listed as questionable to play Sunday after being limited in practice all week. ... OLB Aaron Patrick last week became the fifth Broncos player to tear an ACL, joining Tim Patrick, Javonte Williams, Damarea Crockett and Ronald Darby.

SERIES NOTES: The Broncos have won seven of their past nine games against the Jets. The only time these teams met in the playoffs came in the 1998 AFC championship game. The Broncos trailed 10-0, but scored 20 third-quarter points on their way to a second straight Super Bowl title.

STATS AND STUFF: The Jets are looking for their first 5-2 start since 2010, when they went 11-5 under Rex Ryan and made it to the AFC championship game. ... A victory would give New York its first four-game winning streak since 2015, when it won five straight but missed the playoffs with a 10-6 mark under Todd Bowles. ... The Jets have outscored opponents 68-20 in the fourth quarter, the largest scoring margin in that period in the NFL. The 68 points in the fourth also lead the league. ... New York’s five fourth-quarter takeaways are the most in the NFL. ... Hall is the 17th rookie since the merger in 1970 to have at least one 100-yard rushing game and 100-yard receiving performance in his first season. He joins Pittsburgh’s Najee Harris (2021), Tampa Bay’s Warrick Dunn (1997) and Kansas City’s Joe Delaney (1981) as the only rookies to accomplish the feat in their first six games. ... After throwing two interceptions in his season debut at Pittsburgh on Oct. 2, Zach Wilson has no turnovers in his two games since. ... According to TruMedia and Next Gen Stats, DT Quinnen Williams leads all interior defensive linemen with five sacks this season. He had two last week at Green Bay, to go along with three tackles, a forced fumble, two QB hits, a tackle for loss and a blocked field goal — resulting in being selected the AFC defensive player of the week. ... Rookie CB Sauce Gardner joined Atlanta’s Desmond Trufant as the only players since 2000 with at least one pass defensed in each of their first six NFL games. Gardner, who has eight passes defensed, has allowed one reception for 6 yards in 40 coverage snaps in man coverage. ... QB Russell Wilson is off to a slow start in Denver with five TD passes and 20 sacks. That puts him on pace for 14 TD passes and 57 sacks, both of which would be career worsts. ... If Wilson can't go, expect Brett Rypien to get his second NFL start. His first was a 37-28 win over the Jets on Oct. 1, 2020, at the Meadowlands. ... RB Latavius Murray, who led the Broncos with 66 rushing yards in his Denver debut last week, had two TD runs in his previous game against the Jets on Oct. 21, 2018, with the Vikings. ... Rookie TE Greg Dulcich had 44 yards receiving and a TD catch in his first career game last week. ... ILB Alex Singleton had 21 tackles last week, including 19 solo, in place of Josey Jewell, who was inactive with a knee injury. His 21 tackles were the most in the NFL since Kwon Alexander had that many for the Buccaneers in 2016. ... For the second time this season, CB Patrick Surtain II didn't have a single pass thrown his way last week. ... OLB Bradley Chubb had 2½ sacks against the Jets on Oct. 1, 2020, helping the Broncos win 37-28. ... OLB Baron Browning had two tackles for loss, a sack, two pass breakups and his first career interception and fumble recovery last week.

FANTASY TIP: Wise bet to go with either team's dominant defense in this one.