Jets CB Poole having shoulder surgery, out for season 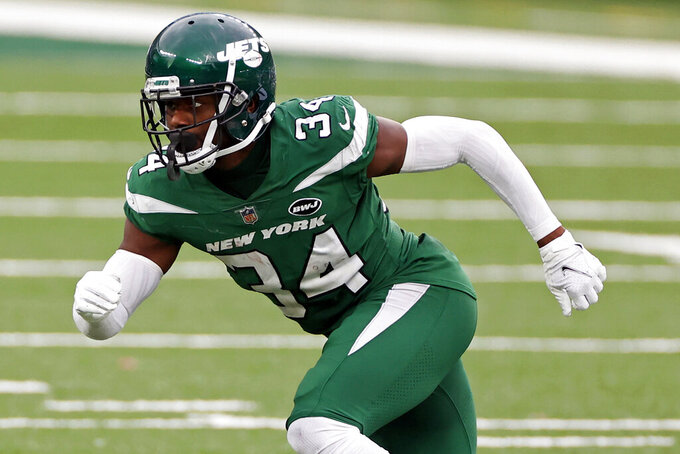 FILE - In this Oct. 25, 2020, file photo, New York Jets cornerback Brian Poole (34) chases a play during an NFL football game against the Buffalo Bills in East Rutherford, N.J. The Jets' suddenly thin and inexperienced secondary took another big hit. Veteran cornerback Brian Poole is having surgery on his injured shoulder, and coach Adam Gase confirmed Thursday, Nov. 19, 2020, the he will be out the rest of the year. (AP Photo/Adam Hunger, File)

Veteran cornerback Brian Poole is having surgery on his injured shoulder, and coach Adam Gase confirmed Thursday that Poole will be out the rest of the year.

Poole, in his second season as the Jets' nickel back, was placed on injured reserve Tuesday after hurting the shoulder and a knee in New York's last game against New England on Nov. 9. Gase sounded optimistic about Poole last week, saying there didn't appear to be any structural damage to the shoulder.

“I guess the decision was made for him to have surgery,” Gase said Thursday.

While the Jets already knew they'd be without Poole for at least a few weeks, they got the news that fellow starting cornerback Bless Austin would miss practice with a neck injury and he was getting an MRI.

“We’ll kind of see what’s going on there,” Gase said, uncertain exactly when or how Austin was hurt.

“We weren’t in pads (at practice), so I’m not really sure what happened," the coach said. “They just told me this morning that something was going on with his neck.”

If Austin can't play Sunday at Los Angeles against the Chargers, the Jets have just five cornerbacks on the active roster — with three of them rookies. Bryce Hall, a fifth-round pick, made his NFL debut last week after missing the first eight games while recovering from an ankle injury that cut short his college career. Lamar Jackson and Javelin Guidry are the team's other rookie cornerbacks.

The only other players the Jets have at the position are Arthur Maulet, who has played in 28 games and started seven, and Corey Ballantine, who was claimed last week off waivers from the Giants. New York released Quincy Wilson on Nov. 6 and Pierre Desir — who had been a starter — on Tuesday.

“We get real young, real fast,” Gase said. “So, we’ll figure out. We’ll be testing some guys out and see who can do what.”

That might not bode well for the Jets going up against a Chargers team that ranks seventh in the NFL in passing, led by rookie quarterback Justin Herbert.

“It's next man up and the boys got to make some plays,” linebacker Jordan Jenkins said. “We've just got to find ways to help them out.”

Gase acknowledged that it's “all hands on deck” and the possibility of playing rookie safety Ashtyn Davis at cornerback has been discussed. But, he added that the Jets would like to keep Davis and Marcus Maye at safety as much as they can despite the low numbers at cornerback.

“I mean, a lot would have to happen for him to go play corner,” Gase said of Davis, who has some experience at the position from his college career at Cal.

It's possible the Jets could start three rookies in the secondary Sunday, with Hall, Davis and either Guidry or Jackson if Maulet doesn't start.

Gase didn't rule out bringing back Desir, who had struggled and wasn't expected to play much in the base defense the rest of the way before being cut.

Ballentine is still acclimating himself to the Jets' defense after being cut by the Giants. He started the first two games this season, but struggled and was benched.

“We saw him as somebody that could maybe contribute on special teams quickly,” Gase said. “We might need him to learn corner a little quicker, but that’s kind of what we saw as a starting point — a guy, a skill defensive position being able to help on special teams. We’re always looking for guys like that.”

NOTES: QB Sam Darnold (shoulder), LB Blake Cashman (hamstrings) and RB Frank Gore (rest) did not practice. ... DE Henry Anderson (knee/ankle), DL Quinnen Williams (hamstring), and WRs Breshad Perriman (shoulder) and Vyncint Smith (groin) were limited. ... K Sam Ficken, who has missed the last three games with a strained right groin, fully participated for the first time since being injured. ... With Darnold out and Joe Flacco starting, fourth-rounder James Morgan is the only other quarterback on the active roster. Mike White, currently on the practice squad, is expected to be promoted as Flacco's backup for the second straight game over Morgan — who has been inactive all season. “I think we’re a ways off from that,” Gase said when asked if he envisioned Morgan serving as the backup at some point this year. “To me, that would be tough for me to put him in that position considering he hasn’t had preseason games, reps with those groups. That’s not something you want to do.”