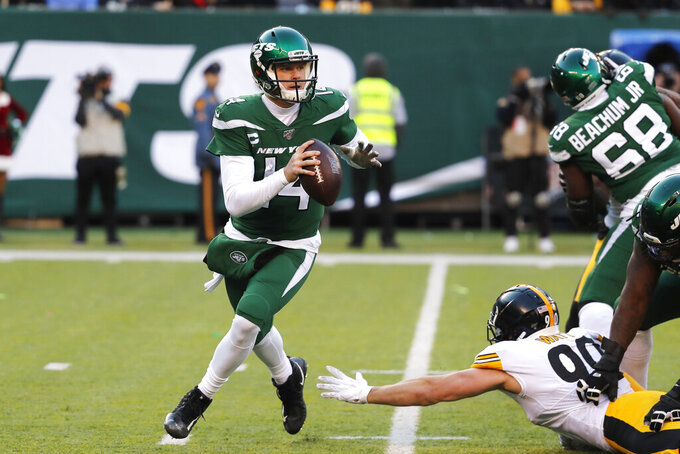 He was dealing with the beginning effects of mononucleosis the previous time he faced the Buffalo Bills in the New York Jets' season opener. The second-year quarterback was inconsistent in a 17-16 loss that was only the start of a stretch of bad news for Darnold.

He felt worse the day after the game, was diagnosed with the illness two days later and then missed three games because of it. It was a major factor in New York's early season struggles, a 1-7 start that only now are the Jets beginning to put behind them with a 5-2 closing run.

Too little, too late, of course. But Darnold and the Jets are no less motivated against the playoff-bound Bills to wrap up the season.

Especially if Darnold can finish the season with a solid performance.

“I think our offense has come a long way since then," he said of the previous time he faced the Bills. “I feel like I've come a long way. I thought just as a whole, we've gotten better. We've learned from our mistakes that we've made and again, that's what it's about. It's about continuing to get better. Obviously, there is a lot that we need to continue to improve every single week.

“This game is just another step, I think, in the right direction toward improvement."

Darnold will start his 13th game of the season Sunday at Buffalo, matching his appearances from last year as a rookie.

Adam Gase wasn't coaching Darnold last season, of course. But he has seen vast improvements from the spring to training camp — and even since that first game against Buffalo.

“He's seeing things that he might've saw earlier in the year and it looks cleaner to him now, it slows down," Gase said. “He knows what to do, he knows what his problems are, he knows what his outs are. ... It's pretty cool to kind of see how far everything has come since then."

The last five games in particular have stood out to Gase, starting with the Jets' 34-3 victory over Oakland on Nov. 24. It was that performance, during which Darnold threw for 315 yards and two touchdowns, that the coach thought the quarterback began seeing the game slower.

“Some things pre-snap looked really good, just communication-wise,” Gase said. “I think every game after that, you see improvement each week. Usually, when I see him talking at the line of scrimmage and he's moving fast and he's getting set and there's a lot of time left on the clock, that's when I feel like he's feeling really good."

Darnold has been solid down the stretch while facing some of the NFL's better defenses against Baltimore and Pittsburgh. He'll get another chance to see how he measures up against Buffalo, which ranks No. 3 in overall defense.

“Playing those teams, it’s fun,” Darnold said. “Whenever you go out there and it’s a tough scheme and it’s really good players, it challenges you. And it brings out the best in everyone.”

Darnold still makes the occasional mistake with risky throws. His working relationship with Gase also remains a work in progress.

That will be a major focus during the offseason and training camp leading into next season — a crucial year for the franchise quarterback to prove he really is the one.

And, whether Gase is the right coach to draw it all out of Darnold.

“I think once he felt more comfortable with the base he had, the communication goes way up and it has gone way up," Gase said. “I think each week it gets more. (He’s) not afraid to say, 'I don't like this,' and not worried about hurting anybody's feelings. If there is something that he wants, to say, ‘Hey, how can we throw this in?' Just little things like that that don't seem like it would be a big deal, but if you're around him, which you guys are all the time, you know how respectful he is.

“He's an unbelievable kid, always just wants to make sure he's doing everything for everybody else. It's not as easy as you think to say, ‘Hey, I don't like this.' He's done a good job of getting to that point where, now, he's not afraid to say anything."