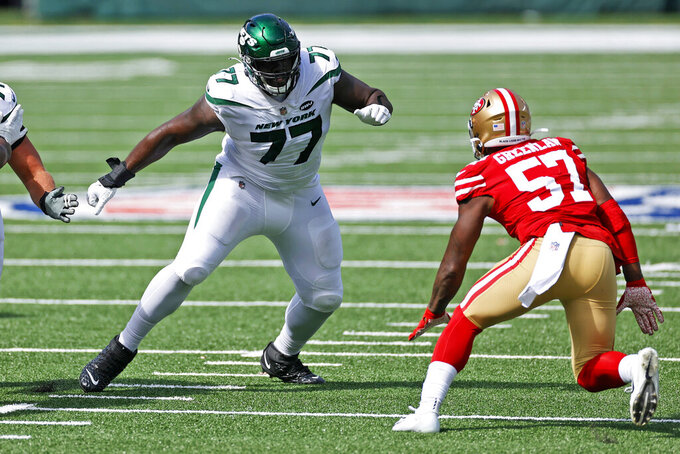 FILE - In this Sunday, Sept. 20, 2020, file photo, New York Jets offensive tackle Mekhi Becton (77) looks to block against the San Francisco 49ers during an NFL football game in East Rutherford, N.J. Becton flings 300-pound defenders to the ground as if they're merely little rag dolls. This is exactly what the Jets envisioned when they drafted the 6-foot-7, 363-pound behemoth out of Louisville. (AP Photo/Adam Hunger, File) 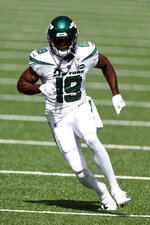 The speedy receiver was ruled out, as expected, on Wednesday for the Jets' home game Thursday night against Denver. Perriman was injured during New York's loss to San Francisco on Sept. 20.

Wide receiver Jamison Crowder was listed as questionable but could return after being sidelined two games with a hamstring injury. He was limited at practice, but he said Tuesday he was confident he could play a full game without fear of reinjuring his leg.

Left tackle Mekhi Becton was also questionable after injuring a shoulder during New York's loss at Indianapolis last Sunday. Coach Adam Gase said Monday the MRI came back better than expected, so there's optimism the rookie will play against the Broncos.

Right tackle George Fant and cornerback Quincy Wilson both cleared the concussion protocol and fully practiced Wednesday. They both missed the game at Indianapolis but appear on track to play against Denver.