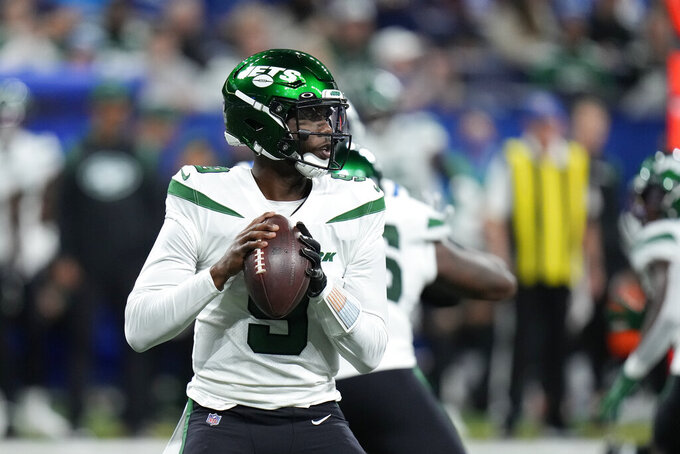 New York Jets's Josh Johnson throws during the first half of an NFL football game against the Indianapolis Colts, Thursday, Nov. 4, 2021, in Indianapolis. (AP Photo/AJ Mast)

INDIANAPOLIS (AP) — The New York Jets lost starting quarterback Mike White to an injured right forearm during the first half of Thursday night's game at Indianapolis.

The team said his return was questionable.

New York also lost tight end Tyler Kroft with a chest injury and starting safety Marcus Maye with an injured calf. Kroft was ruled out. Maye was listed as doubtful to return.

But White was the bigger loss, going out after New York’s second offensive series. He went into the medical tent after throwing a touchdown pass to tie the score at 7.

Josh Johnson, who once played for the Colts, replaced White. The 26-year-old White was 7 of 11 with 95 yards and the TD when he left.

He became an instant sensation last Sunday with an impressive first NFL starting debut while leading the Jets to a 34-31 come-from-behind victory against the Cincinnati Bengals. White, who was starting for the injured Zach Wilson, threw for 405 yards and three touchdowns with two interceptions, and caught a 2-point conversion pass after tossing the go-ahead TD score. His 37 completions were the most by a quarterback in his first NFL start.

Indy lost cornerback-kick returner Isaiah Rodgers after a hard tackle on the kickoff to open the second half. There was no immediate report of the injury or his status.