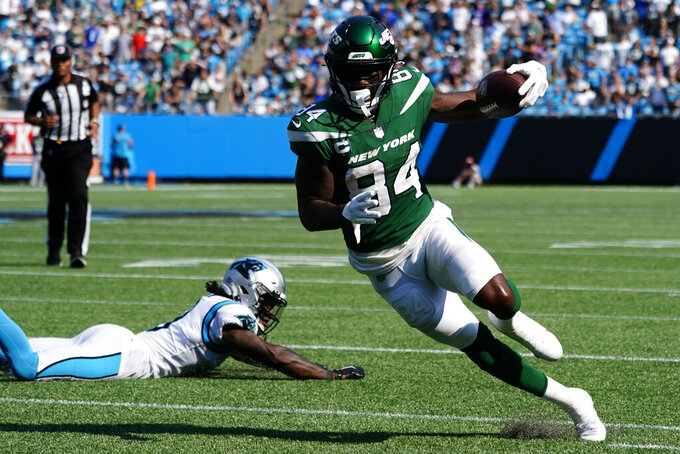 CHARLOTTE, N.C. (AP) — Zach Wilson got a first-hand look at just how difficult it can be to play quarterback for the New York Jets.

But despite getting sacked six times and taking a crushing hit from mammoth defensive tackle Derrick Brown in a 19-14 loss to the Carolina Panthers in his NFL debut Sunday, the rookie quarterback left Jets fans with hope that the future could be promising — if he gets better protection and a few more weapons around him.

“There’s a lot of great things for him to build off of,” said Jets first-year head coach Robert Saleh.

The No. 2 pick in the draft spent the better part of his day on the run, trying to avoid a relentless Panthers pass rush. He was hit 10 times and pressured several others.

Still, he kept fighting and led the Jets to a late touchdown with 1:56 remaining. Earlier in the drive, he completed a tight pass on fourth-and-8 to move the chains and a well-placed 25-yard strike to Braxton Berrios along the left sideline.

There were a few deep throws that just missed, and a few drops as well.

But overall Wilson looked in command, finishing 20 of 37 for 258 yards with two touchdown passes to Corey Davis and one interception.

“He took some shots today, obviously," Saleh said. "But he got back up. He showed resolve. And he’s fearless. He really is. He’s only going to get better. Again, it’s a collective. There’s so many opportunities that we missed and he missed.”

Wilson said he felt he was seeing the blitzes well, but added that the execution fell a little short.

“I’ve got to clean that up,” Wilson said.

“He stood there in the face of a lot of heat and made some throws down the field,” Rhule said. “.... I think he sees the field really well and when he gets out of the pocket he's going to move around and make plays.”

With 2 minutes remaining and the Jets driving, Brown came free up the middle and landed directly on Wilson, causing the QB's head to hit the ground hard and briefly knock the wind out of him. He wasn't tested for a concussion, instead remaining in the game and throwing an 8-yard TD pass to Davis two plays later.

Wilson said afterward it felt like he got run over by a truck and his neck was a little sore.

“When Derrick hit him, I didn't think he was going to get up, but credit to him he did. And I'm happy he did," Rhule said. "And he took them down and scored a touchdown. So I think when you have a guy like that you really sense his moxie.”

Things aren't likely to get easier for Wilson if Mekhi Becton is out for any length of time.

The Jets starting left tackle injured his knee and had to be helped off the field late in the third quarter on a play in where Wilson connected on a 22-yard scoring toss to Davis, his first NFL touchdown pass. Becton was replaced by George Fant, who slid over from right tackle.

On the bright side, the Jets are hoping wide receivers Jamison Crowder (COVID-19 protocols) and Keelan Cole (knee) will be back soon.

So, some help is on the way.

New York could also use some help from the running game after their backs were held to 45 yards on 17 carries, a 2.6-yard average.

“I’ve just to get it into everybody’s hands faster,” Wilson said. “I wouldn’t say we didn’t know what they were doing. They were trying to disguise everything, but I feel like we had a feel for what was going on.”