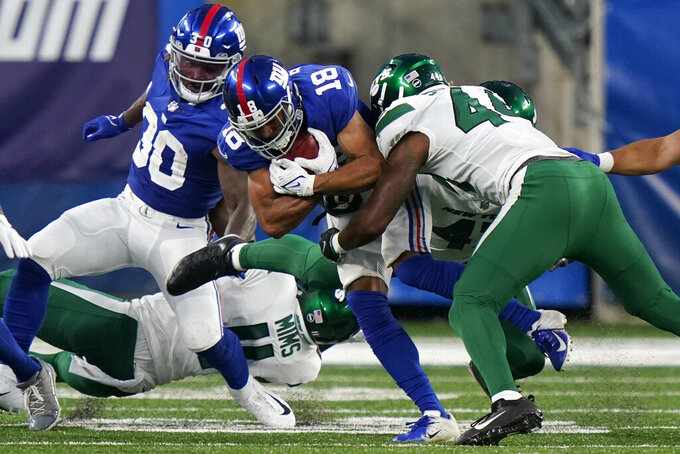 FLORHAM PARK, N.J. (AP) — Jamien Sherwood always liked having C.J. Mosley roaming the field for his defense in the video games he played a few years ago.

Now the New York Jets rookie linebacker is lined up next to him. For real.

“I used to play with him on Madden when he was on the Ravens,” Sherwood said Tuesday. “So when I finally got to meet him, you know, I just thought it was crazy because he was really fast in the game — and it showed out there. He has true instincts.”

The fifth-round pick out of Auburn is getting an up-close look at Mosley and the rest of the Jets defense — and is in line to be a major part of it this season.

Sherwood has taken over at the starting middle linebacker spot in place of Jarrad Davis, who'll be sidelined for about two months with an ankle injury. That means he and Mosley will man the middle of New York's defense together for at least the first five games.

“I feel like it’s a great opportunity for me,” Sherwood said. “I’m having a good training camp, running with the twos. And it’s just to show the coaches what I’ve got. They drafted me to be here. So, just proving to them I’m supposed to be here and that I’m just doing my job the right way and just living up to the standard.”

Sherwood's performance this summer is even more impressive considering he's making the switch from playing safety in college to linebacker in the pros. Sixth-rounder Hamsah Nasirildeen is doing the same, and both could end up being starters as rookies.

Coach Robert Saleh recently compared Sherwood's conversion to that of Fred Warner, who also moved to linebacker from nickel back — and has become one of the NFL's top performers at his position.

“I want to make sure I’m saying this properly: I’m not comparing him to Fred yet, he’s got a long way to go,” Saleh said before praising Sherwood's mindset, communication skills, knowledge of the playbook and instincts. "He’s got a great feel for the game. For him, there’s going to be some hiccups along the way, but we feel with reps he’s only going to get better.”

When the Jets drafted Sherwood, they made their vision of his role — and position — in their defense clear. And Sherwood was up to the challenge.

“Football is football,” he said. “Once I got here for rookie minicamp, I just told myself to be confident, whatever you do. Like when I was a freshman in college, my main thing was communication. I wasn’t that good at it. So when I got out here my first day, I let myself be known to everybody and I just believed in myself.”

Sherwood feverishly studied the playbook, did extra work on and off the field, and chatted with the coaches whenever he'd get the chance. Sherwood also watched film of the 49ers' defense under Saleh the past few seasons, gleaning from it anything he thought might help him better understand his role and responsibilities.

Practice and preseason games have been invaluable to Sherwood in terms of what he can expect physically — and it's a different experience from when he played safety.

“I never had to encounter blocks, at least from offensive linemen,” the 6-2, 216-pound Sherwood said. “It was usually a receiver and me being one of the bigger (safeties) in college, I was able to get off them easily.”

Now, he has to deal with much bigger players on offense.

“I’m one of the smaller linebackers now, so it's just playing big boy ball now,” Sherwood said. “Using my hands, and getting on and off those blocks.”

Sherwood was then asked if he feels comfortable with that yet.

“Yes sir,” he said without hesitation. “Most definitely.”

Sherwood is now leaning on both Mosley and Davis to help him improve on a daily basis, picking their brains for tips and suggestions.

And maybe someday, some youngster out there playing video games right now will be excited about the chance to play — on an actual NFL field — with Sherwood.

“Everybody dreams of being in the NFL, and I'm finally living out that dream,” he said. “I'm just living in the moment.”

NOTES: WR Elijah Moore (quadriceps) and LG Alijah Vera-Tucker (pectoral) both returned from injuries to participate in team drills in the Jets' joint practice with the Philadelphia Eagles, and DT Quinnen Williams (foot) had his snaps increased. “It was kind of like Christmas,” Saleh said. ... LT Mekhi Becton banged helmets with another player, walked off the field and vomited before being checked for a head injury. Saleh said it was still being determined whether the second-year O-lineman would be placed in the concussion protocol. ... CB Brandin Echols injured his hip after making a play late in practice. ... To reach the maximum 80-player roster limit, the Jets waived WRs Manasseh Bailey and Josh Malone, LB Edmond Robinson and OL Tristen Hoge. They also placed DL Vinny Curry on reserve/non-football injury.