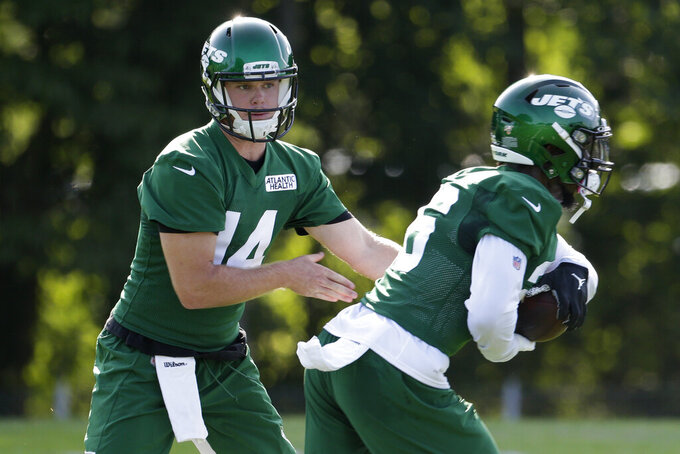 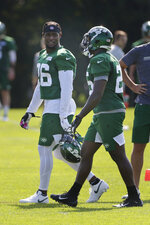 FLORHAM PARK, N.J. (AP) — The New York Jets will have a busy backfield this season.

Le'Veon Bell is the star of the running backs group, of course. But, Ty Montgomery and Bilal Powell, and perhaps even Elijah McGuire and Trenton Cannon could all play significant roles in Adam Gase's offense.

Through four training camp practices, it has been clear that Gase likes the idea of mixing and matching his backs while using them in various ways. There could be multiple ballcarriers lined up at different spots on a given play, presenting a big-time challenge for opposing defenses.

"I can tell that in this offense the backs are going to be used a lot," said Montgomery, who signed with New York as a free agent after splitting last season with Green Bay and Baltimore.

Bell was signed in the offseason to be the primary ballcarrier, a bell-cow back who is used to plenty of touches. He had a league-high 406 of them in 2017, the last season he played in a game before sitting out all last year in a contract dispute with Pittsburgh.

The Jets are being cautious during camp with Bell, who twice left practice briefly Sunday with cramping in his right leg. Gase had no concerns that it would be an issue, and Bell has shown no signs of rust when he has been on the field.

"For me, I'm going to go as hard as I personally can each and every rep," Bell said. "It's going to be more so on the coaches to hold me back just because of the fact I'm not going to hold myself back. If I have four reps, I'm going to run four reps as hard as possible. And I'll stay in for the fifth rep if they don't take me out. That's the kind of player I am. They'll protect me from myself."

His dual-threat abilities are well-documented: He rushed for 5,336 yards and 35 touchdowns in five seasons with Pittsburgh, and caught 312 passes for 2,660 yards and seven scores as one of the league's most versatile and dangerous offensive players. His 128.9 yards from scrimmage per game over his career is the best mark in the NFL since the 1970 merger.

"There are a lot of ways that we're going to involve him in this offense," the quarterback said.

And, Bell isn't the only one.

Montgomery played wide receiver at Stanford and began his NFL career at the position with Green Bay before being moved to running back in his second season in 2016. He has thrived in a dual-threat role since, catching 107 passes for 892 yards and three touchdowns while rushing for 932 yards and seven scores in four NFL seasons.

"The more guys that we have that can do multiple things the better," Gase said. "I think Ty's flexibility is huge for us. It helps you with the active (roster on gameday). You might be able to go a little light on wideouts because he has experience. You can go a little heavy on the backs that help on special teams as well because you can save a roster spot with a guy that can just only play offense, or can only play defense.

"When you've got a guy that can do multiple things and contribute on special teams, that's valuable for us."

Powell was re-signed early last month after recovering from a neck injury last October that cut short his season. The Jets' fourth-round pick in 2011 has established himself as a solid complementary back who can also do plenty of damage to defenses while catching passes out of the backfield.

"There's so many different pieces and parts to the offense," Powell said. "I think that's going to help create mismatches against the defense."

While McGuire — a sixth-round pick in 2017 — and Cannon — a sixth-rounder last year — are hardly locks to make the final roster, Gase has shown a tendency to use multiple running backs in his previous stops in Miami, Chicago and Denver.

"With those guys, they're so unique," Darnold said of his running backs. "They have such good route-running ability. They can line up out wide, run routes. In the backfield, you don't know if they're going to run a route or get a handoff so it makes it hard on a defense and it's really good for us as an offense to have those weapons. We're going to keep using them."

NOTES: Backup OT Brent Qvale was carted off the field early in practice with a right knee injury. He was scheduled to have an MRI exam, but Gase said it didn't appear promising. ... TE Daniel Brown left practice with a hamstring injury. ... Rookie LB Jeff Allison didn't practice with a shoulder ailment. ... Neat moment early in practice: Defensive coordinator Gregg Williams fired up the fans when he walked over to the bleachers and told them the players are taking to the coaching, want to be coached and "they want to defend MetLife Stadium for you guys." That set off loud cheers and a "J-E-T-S" chant.