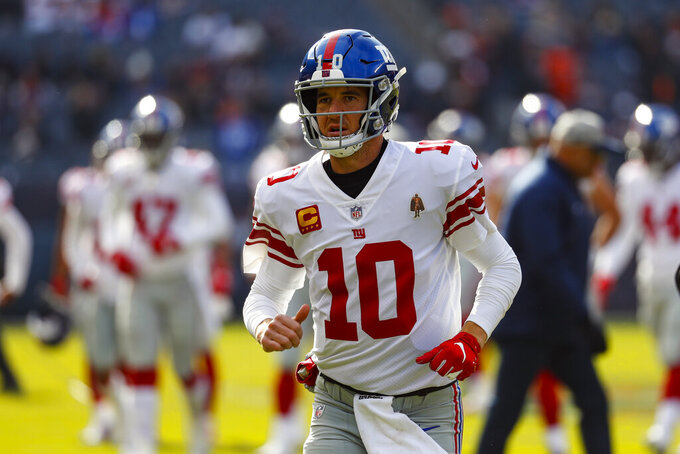 Jones was hurt Sunday in a loss to the Green Bay Packers. The sixth pick overall in the draft finished the game but his injury prevented him from working out this week.

The 38-year-old Manning has taken the majority of snaps in practice with Alex Tanney getting the leftovers. Jones has worn a boot on his ankle most of the week.

Manning started the opening two games of the regular season, losses to Dallas and Buffalo.

Coach Pat Shurmur decided after the loss to the Bills to replace the two-time Super Bowl MVP with Jones, who then led New York to two straight wins. The Giants have lost their last eight and are a loss shy of tying the franchise record for consecutive losses, set in 1976.

“He looks good,” offensive coordinator Mike Shula said about Manning. “He’s had a good week. He always has a good look in his eye. He’s been great for me, as a coach, to be around. I’ve learned a lot from him. I look forward to watching him on Monday night.”

The Giants also announced receiver Golden Tate III has cleared the concussion protocol and will be eligible to play Monday. He was hurt in a loss to Chicago on Nov. 24.