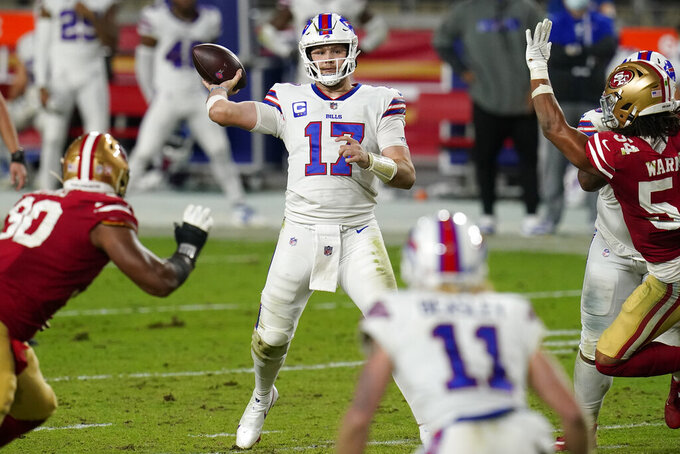 ORCHARD PARK, N.Y. (AP) — The way Josh Allen and Buffalo’s offense is humming, the Bills appear better equipped to overcome the deficiencies in their two most recent one-and-done playoff exits.

Allen’s 3,403 yards passing rank fifth in the NFL and already place him eighth on Buffalo’s single-season list. The Bills' 333 points scored through 12 games already match their total in 17 games, including playoffs, last year.

And the third-year quarterback continued his upward trajectory during a 34-24 win over the San Francisco 49ers on Monday night.

Allen finished 32 of 40 for 375 yards with four touchdowns and no interceptions for the AFC East-leading Bills (9-3), in wowing teammates and opponents alike.

“You’ve got to give him credit, man,” 49ers cornerback Richard Sherman said. “He played a freaking fantastic game.”

This certainly isn’t the plodding Tyrod Taylor-led offense that produced 263 yards and crossed midfield three times in a 10-3 wild-card playoff loss at Jacksonville in January 2018.

And it doesn’t resemble the Allen-led hot-then-cold attack which managed just two field goals on its final seven possessions, and squandered a 16-0 third-quarter lead in a 22-19 OT wild-card loss at Houston this past January.

Rather than having to lean on its defense to limit scoring opportunities, the offense is forcing opponents to keep pace.

From 2012 through last season, the Bills were 8-58 when allowing 21 or more points. They’re already 6-3 this season, and scored 30 or more points six times, the same number Buffalo managed in its previous three years combined.

The offensive eruption is a testament to a defensive-minded coach in Sean McDermott placing his trust in the strong-armed quarterback, who has been let loose by coordinator Brian Daboll’s innovative attacking approach.

And it’s a credit to general manager Brandon Beane, who refused to sit still this offseason in addressing what he considered to be the Bills’ biggest flaw in saying they needed to score more points.

Beane boldly delivered by giving up a first-round draft pick to acquire Stefon Diggs in a trade with Minnesota to provide the Bills a trio of established receivers rounded out by John Brown and Cole Beasley. Beane didn’t stop there and selected Gabriel Davis in the fourth round.

Diggs is tied for the league lead with 90 catches and ranks fifth with 1,037 yards receiving. Beasley is coming off a career-best outing with nine catches for 130 yards and a touchdown against the 49ers. Davis, who has taken on a larger role with Brown on injured reserve (ankle), now leads Buffalo with five touchdowns after scoring on Monday night.

Add it up, and Buffalo has finally entered the NFL’s modern-day era by playing an entertaining and, more important, winning brand of football that has the team in position to clinch its first division title since 1995.

Allen brushed off the attention and references to Kelly.

“It’s obviously cool to be mentioned in the same sentence, but my focus is doing what I can do to put this team in the best situations to win football games,” Allen said. “That’s all that matters to me.”

Finishing drives. After being stopped on downs and losing a fumble on its second possession, Buffalo scored on six consecutive drives before having to punt. The Bills have punted just 29 times this season, tied with the Carolina Panthers for the fewest in the NFL.

Defending against the deep ball. The Bills have allowed a 40-plus-yard completion in four straight games, including Brandon Aiyuk's 49-yard reception on a drive that ended with Kyle Juszczyk scoring on a 6-yard catch, cutting Buffalo’s lead to 27-17 in the final minute of the third quarter.

Beasley took advantage of the Niners focusing their coverage on Diggs to finish with nine catches on 11 targets.

Rookie RB Zack Moss. After nearly losing a fumble at the San Francisco 7 on the opening drive, he botched a handoff in his own end zone on Buffalo’s next possession, with the fumble recovered by the 49ers at the Buffalo 3. Moss was benched for much of the next three quarters, with McDermott saying: “The reason you didn't see him is because you can't put the ball on the turf.”

Moss, RB Devin Singletary and RG Jon Feliciano all returned after being treated on the sideline.

16 — Number of second-half career interceptions Tre’Davious White has after picking off Nick Mullens’ attempt to Jeff Wilson at the Buffalo 2 with 6:55 left.

Buffalo is back in prime time on Sunday night, hosting the Pittsburgh Steelers (11-1), who are coming off their first loss of the season.