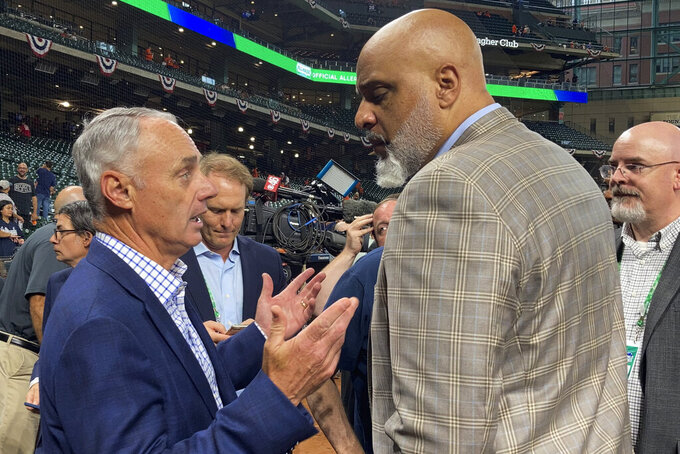 A five-year contract between MLB and the Major League Baseball Players Association expires at 11:59 p.m. EST on Dec. 1.

Now 63, completing seventh year as commissioner. Succeeded Bud Selig as baseball’s 10th commissioner in January 2015. A 1980 graduate of Cornell and a 1983 graduate of Harvard Law School, he clerked for U.S. District Judge Joseph L. Tauro in Massachusetts. Manfred became involved in baseball in 1987, when he was an associate at Morgan, Lewis & Bockius and the firm was retained as counsel for MLB’s Player Relations Committee. He assisted on collective bargaining during the 1990 spring-training lockout and the 1994-95 strike, then became MLB’s executive vice president for labor relations and human resources in 1998. He was promoted to EVP of economics and league affairs in 2012 and to chief operating officer in September 2013. He led negotiations for labor deals in 2002 and 2006 with then-COO Bob DuPuy and headed talks in 2011.

Took over as MLB’s chief negotiator ahead of talks leading to the 2016 agreement after serving as No. 2 negotiator. The 55-year-old is a 1988 graduate of Cornell and 1991 graduate of Harvard Law School, was a partner in the labor and employment law department at Proskauer Rose and was an outside counsel to MLB in collective bargaining and salary arbitration. He was hired as MLB’s senior vice president and general counsel for labor in September 2007 to replace Frank Coonelly, who left to become Pittsburgh Pirates president. Halem was promoted to executive vice president for labor relations in December 2013, chief legal officer in December 2014 and deputy commissioner for baseball administration in December 2017.

Made opening argument in grievance by players’ association over shortened 2020 season. Now 67, is co-executive chairman of Winston & Strawn and co-chair of its antitrust/competition and sports law practices. Longtime sports union outside counsel with a specialty in antitrust cases, was a key figure in McNeil v. NFL, Brady v. NFL, Fraser vs. MLS, Jenkins v. NCAA and currently Morgan vs. U.S. Soccer Federation. While he was at Weil, Gotshal & Manges from 1977-2003, Meyer worked with him on several cases.

Castro, at $3.5 million, is the only one of the eight who earned under $12 million this year. Just 86 players among 1,695 who played in the major leagues this season earned $12 million or more as of Aug. 31, including prorated shares of signing bonuses.

Lauren M. McFerran (chairman), Gwynne A. Wilcox and David M. Prouty are the three Democratic appointees on the board, and John F. Ring and Marvin E. Kaplan are the Republican appointees.

Prouty served as chief labor counsel of the Major League Baseball Players Association from 2008-13 and general counsel from 2013-17, when he was replaced by Ian Penny. There is conflicting opinion whether Prouty would recuse himself from matters involving the players’ association.

An agency that provides assistance upon request to parties in collective bargaining. The director's job is vacant and Javier Ramirez, who joined the FMCS staff in 2005 and is director of agency initiatives, has been nominated by President Joe Biden and is awaiting Senate confirmation.

The NLRB has ruled, most recently in a 2019 decision, that “it is clear that, following the expiration of a collective bargaining agreement, an employer must maintain the status quo of all mandatory subjects of bargaining until the parties either agree on a new contract or reach a good-faith impasse in negotiations.” (Richfield Hospitality Inc. as Managing Agent for Kahler Hotels and Unite Here International Union Local 21)

Section 10(j) of the National Labor Relations Act authorizes the NLRB to request an injunction in U.S. District Court to stop unfair labor practices. When MLB instituted a signing freeze on Feb. 5, 1995, two days after the union ended its signing own freeze in response to new terms and conditions, the players’ association filed a new unfair labor practice charge with the NLRB’s New York office. The NLRB issued a complaint on March 14. NLRB general counsel Fred Feinstein asked for permission to seek an injunction, which the five-member NLRB board granted March 27 in a 3-2 vote with Democratic appointees in favor and Republican appointees opposed. U.S. District Judge Sonia Sotomayor granted the injunction on March 31, and owners voted two days later to accept the players’ unconditional offer to return to work.

When a union gives up its collective bargaining rights, a tactic the NLRB affirmed in its 1965 decision in Rochelle Restaurant. The NFL Players Association and the National Basketball Players Association both used the tactic in 2011 during lockouts as an attempt around the 1996 U.S. Supreme Court decision in Brown v. Pro Football Inc., which ruled federal labor laws create a nonstatutory antitrust exemption in a collective-bargaining situation. Kessler represented players in antitrust suits during both those lockouts.